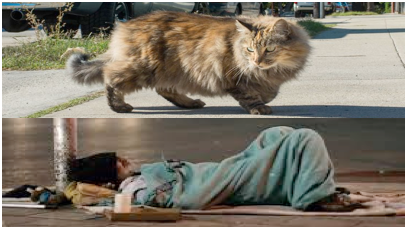 ANIMAL WATCH-On April 20, Mayor Garcetti released his proposed budget for 2016-2017, which includes over $800,000 for a report on the estimated 3 million feral cats roaming Los Angeles and whether they have an impact on public health, wildlife and the environment.

Regardless of how much we love animals, the magnitude of this proposed expenditure for an analysis of stray/feral cats is shocking, when a burgeoning number of homeless humans — including women, children, veterans and the elderly — are living in the streets, and property owners are desperate for solutions to resultant conflicts all over the city.

“We fought hard for the $500,000 we want for an EIR to fight the injunction [prohibiting City-funded Trap-Neuter-Release of feral cats] that is against the city,” L.A. Animal Services GM Brenda Barnette told the Commission in February during an oral report. “The total will be $750,000 to $800,000, with a 20% contingency.” She explained that the department has $300,000 retained from last year (2015-16), and “with the assistance of the Mayor’s office, we are trying to keep that.”

(Author’s Note: If this money could be reallocated for a feral cat report, it could have been used to replace a portion of the deteriorated LA Animal Services trucks in which the ventilation system fails to keep animals cool in the summer, brakes fail, a steering wheel came off in the hands of an officer, and the doors on the animal-holding compartments are fly open during transport.

The manager of the City’s Fleet Services told the PAW Committee, at an apparently perfunctory meeting scheduled by Chair Paul Koretz, that they were dangerous and had not been replaced since 2001/2003. However, no further effort has been made to protect the animals and officers.)

The injunction Barnette referenced is the 2009 Superior Court prohibition against an “informal but pervasive” Trap-Neuter-Release program by then-GM Ed Boks, using city tax-funded vouchers (reserved by ordinance for pets of Los Angeles residents) to spay/neuter feral cats and release them all over the city. The order enjoined any such program until legally required environmental impact reviews were performed.

Boks also enacted a policy of refusing nuisance stray/feral cats trapped by property owners and brought to the shelter and did not issue traps for that purpose. This meant that residents with allergies or suppressed immune systems or who objected to cats defecating in their flower bed or garden, menacing their pets or killing birds and other small wildlife in their yard had no legal option to remove them.

“Our goal was to see that the City follows the California Environmental Quality Act by thoroughly assessing the program’s impacts on the environment and considering alternatives and mitigation measures before making specific programmatic decisions.

“Feral cats have a range of impacts to wildlife, human health, and water quality in our cities. The impacts of institutionalizing the maintenance of feral cat colonies through TNR should be discussed in an open, public process before any such program is implemented.”

An LAAS donor-funded $52,000 Mitigated Negative Declaration by the Bureau of Engineering in 2013 met with overwhelming opposition and negative comments by experts from numerous relevant agencies, as well as criticism by feral cat activists, and has not been revisited but could be revised. Why is this not being considered?

The considerations required by the injunction does not rise to the level or expense of a full Environmental Impact Report (EIR), so the immediate jump to that monetary commitment by the Mayor -- the ultimate guardian of the city’s resources -- is bewildering and alarming.

Barnette told the Commission in February that the CAO’s Budget Committee “was not fond of this idea.” However, a CPRA response later obtained from the CAO indicates that may not have been the case.

“The Department requests authority to expedite transfer of $300,000 from the Unappropriated Balance …to the Bureau of Engineering (BOE)…Engineering Special Services Account.”

“The purpose of this transfer is to immediately initiate preparation of the Environmental Impact Report (EIR) for the Trap Neuter Return (TNR) program, Mr. Forland explains.“Work cannot begin… until these funds are in the BOE account. (Note: BOE estimates the total cost of the EIR will be approximately $800,000.)

On January 28, Felicia Orozco responded, “That is great news. I can work on including this transfer in the Mid-Year FSR…”

On Feb. 25, Robert Kadomatsu, Chief Management Analyst for the BOE, asked Orozco not to share an attachment to his email. He stated, “…the EIR process is going to be extensive as well as expensive. The $814K estimate was just completed and has not been shared with anyone else yet.”

Apparently approval by the Mayor was a no-brainer, but the anticipated automatic Committee vote that accompanies all Paul Koretz animal-related proposals, was stymied by Budget and Finance Chairman Paul Krekorian at the hearing on March 28. Krekorian stated that this was the first time he had heard about a half-million dollars being spent on a report about spaying and neutering cats. (This discussion is available for public viewing on the www.lacity.org website and definitely worth watching.)

Koretz quickly advised him that it is actually $800,000 and that holding the Unappropriated $300,000 was spearheaded by Councilman Bob Blumenfield. Coincidentally, Jim Bickhart, former aide to Mayor Villaraigosa, dba Speedway Policy Associates, and was under contract for “personal services” to Blumenfield at that time.

Kudos to Paul Krekorian, who withstood pressure from Paul Koretz and instructed Barnette to bring back a report that explains the need for this expenditure!

He also asked for evidence that this type of program has been successful in other major cities.

“Success” in counting stray cats in a large city is an oxymoron; however, here is what NY Governor Andrew Cuomo wrote in October 2015 when he vetoed a Bill to create a statewide TNR policy:

I am returning herewith, without my approval, the following bill: Assembly Bill Number 2778, entitled:

"AN ACT to amend the agriculture and markets law, in relation to community based initiatives for the purpose of trapping, neutering, vaccinating and returning feral cats to the area from which they were trapped" NOT APPROVED

This bill would allow for the diversion of up to twenty percent of the State's Animal Population Control Program Fund (APCPF) to be used for community-based initiatives to trap, spay, neuter, vaccinate, and return feral cats to the area where they were found. Such programs are   referred to as Trap Neuter and Release (TNR) programs.

Although the goal of this bill is laudable, it is problematic for several reasons. First, I cannot support diverting APCPF funds from existing programs that have already proven effective for humanely controlling feral cat populations.

Second, a central tenant of TNR programs is the release of feral cats into the wild. However, that conflicts directly with Agriculture and Markets Law section 374(5), which makes the release of such animals a misdemeanor offense, and would create uncertainty as to the legality of releasing trapped animals.

Third, the prevailing science suggests that TNR programs are not guaranteed to reduce feral cat populations, and, even if they do, may take many more years to do so than existing programs.

Finally, the return of feral cats to the wild must be balanced against the impacts these cats can have on wildlife, including on threatened and endangered species, habitats, and food sources for native predators. I am therefore constrained to veto this bill.

TNR is legal in the City of Los Angeles. It was not affected by the injunction if done with private funding. Cats are trapped-neutered and returned/relocated daily (and nightly) in LA under grants and subsidies by many large organizations (e.g., Best Friends and ASPCA) and pet-supply charities (such as PetSmart.) Truckloads of food are distributed to feral cat “feeders” regularly by leading pet-food companies.

The injunction merely stopped the use of City taxpayers’ money (a limited resource reserved for owned animals by ordinance) for surgeries on stray/feral cats, or any involvement by the city in advertising or promoting TNR, because of the lack of review of the deleterious affect cat waste can have on waterways and the decimation of birds and other wildlife populations by roaming cats.

Based on recent studies in California, about 1.2 million tons of cat poop is deposited into the environment each year.

Also, when feral cats are placed in colonies and an artificial food source is provided, they tend to live longer and other (unaltered) cats are attracted to the location, where they reproduce and may avoid being trapped. Rodents, raccoons, skunks and coyotes are also drawn to the food source.

Experts have described mitigating measures; such as an enforced “non-roaming” ordinance for owned cats in LA (meaning that they would be kept in the house or the owner’s yard or leashed when off the property), along with licensing and mandatory microchipping to assure owner identification/responsibility, all of which have been rejected by Brenda Barnette and Paul Koretz.

The cause of the feral cat population is the failure of City government to hold cat owners responsible for cats as they do for dogs and creating an attitude of “disposability.” There are few (if any) major spay/neuter campaigns that regularly target cat owners, even though they are included in the City’s spay/neuter ordinance.

The continual praise of trapping, altering and then releasing or relocating these cats (TNR) assures they live terrified lives under greasy cars and buildings or in unprotected areas where they are victimized by aggressive dogs and hateful humans or hit by cars. They often become injured and diseased and cannot be retrapped. This should not be considered “humane.”

Our goal should be vigorously addressing cat sterilization BEFORE they become feral and not allowing the public and irresponsible cat owners to believe TNR is an acceptable option.

Sadly, feral cats are one of the most exploited and unprotected of all animals. They are not indigenous, meaning they were imported to this country; and therefore their affect on the environment and predation on wildlife is not natural, but destructive.

Not wanting feral cats on your property and risking the spread of disease to pets or humans does not signal a dislike of cats. Cats act as vectors for many contagious and zoonotic [transmissible to humans] diseases; such as Toxoplasmosis, which infects the brain and other organs.

The site, “5 Most Dangerous Cat Diseases” provides an excellent guide to the most common and often fatal diseases found in feral cats, including Feline Leukemia, FIV, Feline panleukopenia (distemper), renal failure and rabies. It also reminds us of the suffering of feral cats infested with fleas and other parasites.

“Experts claim that 70% of the feral population must be sterilized to stop an increase in the number that are sustained and replenished in the streets…without an effort to impose owner responsibility BEFORE the cat becomes feral, obviously the source will be greater than the remedy.”

The City’s proposal will establish a “cat program” by ordinance that usurps the right of property owners to remove them and take them to shelters. Brenda Barnette told the Commission on Feb. 25, 2015, “The terms of this injunction _require_ us to give trapping permits for cats and to accept those cats into the shelter.  So that's one of the other good reasons to try to get past and to try to get on to a day when we're not under this injunction.”

Are there common factors in the feral-cat exploitation and homeless human challenges in Los Angeles? Both are being used as an excuse to weaken private-property rights and both groups are dependent by the distribution of subsistence.

However, at the other end of this spectrum in both instances, these victims provide the opportunity for unending fundraising -- whether or not they actually reap the benefits, and the outcome of expenditures in either case cannot be accurately traced.

(Animal activist Phyllis M. Daugherty writes for CityWatch and is a contributing writer to opposingviews.com. She lives in Los Angeles.) Prepped for CityWatch by Linda Abrams.