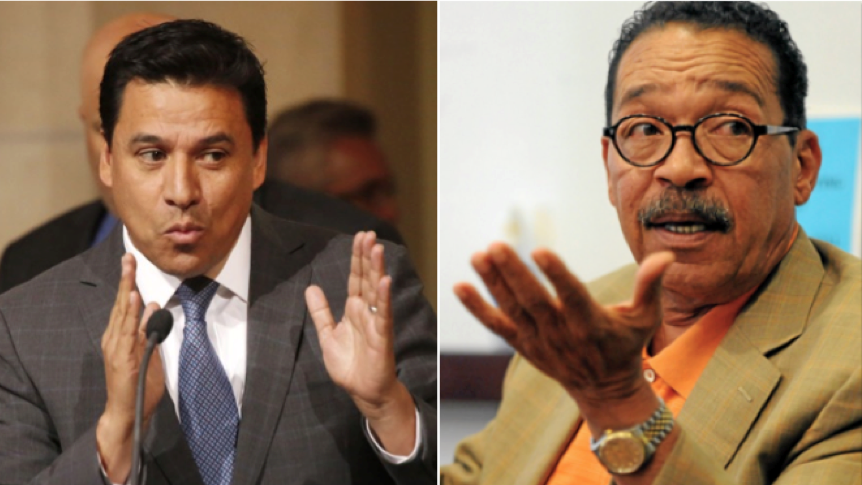 @THE GUSS REPORT-You are not living your best life if you look at a corrupt, arrogant felon like former LA City Councilmember Mitch Englander, who is staring down the barrel at a statutory maximum 5 years in federal prison, and think to yourself, “jeez, I wish I was that guy!”

Right now, his former colleague, the suspended Councilmember Jose Huizar, a product of Berkeley, Princeton, and UCLA Law School, would readily trade his cajones to be Englander rather than himself.

That’s because last week the entire weight of the federal government came crashing down on Huizar, 51, with thirty-four corruption counts that could land him in prison for the rest of his life.

Sometime between late 2018, when the FBI raided Huizar’s offices and home, and last month when the FBI arrested him, Huizar missed the flashing red warning lights that life as he knew it was over and that he should cut a plea deal right away.

(Huizar could not enter a plea when he was arrested last month because the grand jury had not yet charged him with any of the thirty-four counts. He was arrested on an FBI agent’s affidavit of probable cause.)

Now the questions are whether Huizar has an ace up his sleeve to play and whether his prosecutors, Assistant United States Attorneys Mack Jenkins, Veronica Dragalin, and Melissa Mills even care about it, with so many other LA City Hall associates cutting cooperating deals for themselves.

But it’s so much worse than that for Huizar.

Take for instance the silence of Herb Wesson, the former LA City Council president and a chain-smoking smorgasbord of self-dealing, who saved Huizar’s political career a few years ago when the worst of Huizar’s publicly known transgressions were an infamous car accident and his harassing and humping the women who worked in his office in exchange for raises, promotions and political endorsements.

That’s not good, considering that Wesson repeatedly publicly stated that Huizar is “my best friend.”

We know why Wesson has been silent. He has been in dire financial straits for years and his universe is held together by a thread with Huizar at the other end of it, as documented in a sycophantic 2015 piece written by current LA Times reporter Dakota Smith when she was with the LA Daily News:

“Illustrating Wesson’s role in running City Hall, when he wants a policy put up for a vote in City Councilman Jose Huizar’s land use committee, ‘he nudges me,’ Huizar said.”

Wouldn’t you love to be a fly on the wall when Jenkins tells Huizar’s federal public defenders that if they want a plea deal, their client needs to spill everything about Wesson’s land use “nudges” and more?

To paraphrase Liza Minnelli, what good is sitting alone in your cell? Come join the plea deal cabaret!

Speaking of Huizar’s public defenders, Englander (who recently bought a $1.8 million unit a mile from the Pacific Ocean without a discernable source of significant income and a series of strange, recent business filings), somehow managed to afford private counsel for his criminal quandary. But Huizar, who allegedly threw away his life for far more dirty money than Englander connived, has to pay the feds $3,000 per month for his public counsel.

Perhaps Englander did better gambling with those “borrowed” high denomination casino chips than Huizar did. . .

And Huizar’s indignities keep piling up. While his California law license is on Inactive status, his wife Richelle Rios Huizar’s is Active but virtually toxic in terms of employment. Also, while Englander’s children, Lauren Englander and Lindsey Englander are grown though frequently seen at the folks’ expensive digs off of Montana Avenue in Santa Monica, the four Huizar kids are all young, with their lives and biggest needs on the horizon. Yet not even that has been enough for Huizar to sacrifice himself.

But the flip side is this: maybe the feds don’t need Huizar to take down the rest of City Hall. Maybe that window of opportunity has closed, and no deal is even available to him. All the feds have to do is read this column’s history, starting with Councilmember Curren Price’s bigamy, perjury and bungled DIY bankruptcy to Herb Wesson’s falsified voter registration affidavits (and those of his son, Justin Wesson) through to his wife Fabian Wesson’s falsified educational quals that landed her a quarter-million dollar gig replacing a Ph.D. at the South Coast AQMD, where LA City Councilmember Joe Buscaino is a Board member, but who has been silent about her dubious hiring there.

Perhaps Buscaino may have had too many Sea Breezes -- as in the land development deal -- to speak up, if you catch my drift. And has anyone noticed how silent LA Mayor Eric Garcetti and City Attorney Mike Feuer, whose offices the FBI raided last summer, have been about all of this?

So let me leave you with three parting questions: since Huizar is presumed innocent until proven guilty, and he is still a member of the LA City Council, albeit a suspended one, why do its agendas list his office as “vacant?” Who made that decision and what secrets is she keeping?

(Daniel Guss, MBA, is nominated for a 2020 Los Angeles Press Club journalism award for Best Political Commentary, and has contributed to CityWatch, KFI AM-640, iHeartMedia, 790-KABC, Cumulus Media, Huffington Post, Los Angeles Daily News, Los Angeles Magazine, Movieline Magazine, Emmy Magazine, Los Angeles Business Journal, Pasadena Star News, Los Angeles Downtown News, and the Los Angeles Times in its Sports, Opinion and Entertainment sections and Sunday Magazine, among other publishers. Follow him on Twitter @TheGussReport. His opinions are his own and do not necessarily reflect the views of CityWatch.) Prepped for CityWatch by Linda Abrams.