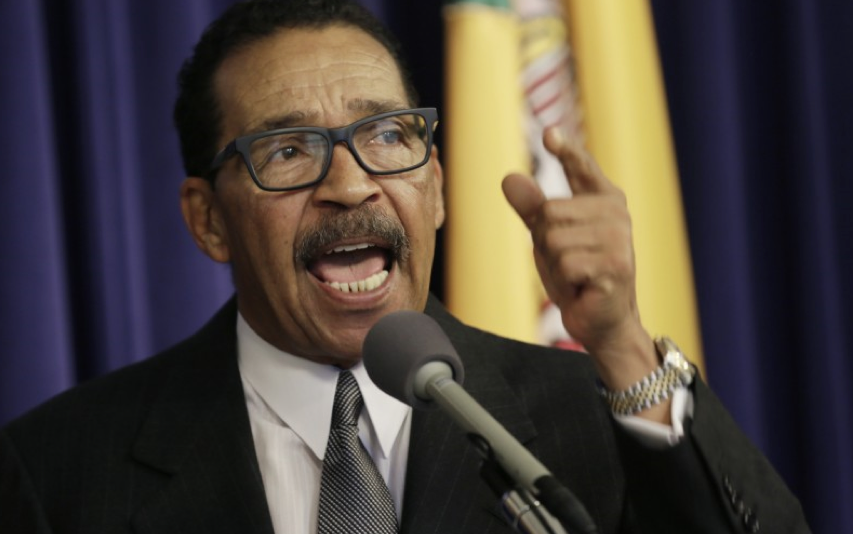 @THE GUSS REPORT-Well, that was quick. The South Coast AQMD, an important agency doing valuable environmental work, was eager to speak with me recently about its scientific endeavors, but went suddenly silent when two top executives were asked to field live questions about its bizarre employment arrangements with, among other politically connected employees, Fabian Wesson, wife of LA City Councilmember Herb Wesson.

That’s because – as this column has pointed out more than any other, including the LA Times – Mr. Wesson continuously exploits his corrupt grip on taxpayer dollars to benefit himself and his family, and, in this instance, may have deprived the public of fair employment practices for other, more qualified candidates who aren’t politically connected.

In my most recent column, “How Herb Wesson Cheated LA, Part 2,” I expose how Mrs. Wesson repeatedly falsely claimed she has a Bachelor of Science degree from the University of Phoenix and lacks legitimate, non-appointed, paid professional experience in the sciences, but wound up with an AQMD gig that compensates her (i.e., and Herb Wesson) to the tune of $265,000 a year, and how the AQMD claims it can’t prove when, if ever, Mrs. Wesson works on the sprawling AQMD campus in Diamond Bar, which is a 63- to 78-mile round trip commute from the Wesson’s home in the City of Los Angeles.

One of Mrs. Wesson’s predecessors earned a Ph.D. in Chemical Engineering from the prestigious Northwestern University, has 33 years of direct industry experience and now teaches at UCLA. By comparison, Mrs. Wesson’s education according to her social media posts was regressive, i.e., she used to claim she earned a Bachelor of Science degree in 2003 but she more recently claimed that she only attended the school. It is unclear whether she completed any of its courses.

I reached out on Tuesday to the AQMD to see if its top two executives, Wayne Nastri, Executive Officer, and Jill Whynot, Chief Operating Officer, would field live questions about its hiring of spouses and children of politicians, some with substandard or falsified qualifications, into above-market-rate gigs.

The response came back short and sweet:

“Unfortunately, Wayne and Jill are not available and we won’t be able to accommodate your interview request.”

The reply to this question got a zero-word response.

As Mr. Wesson, who went predictably silent on this latest scandal, is a native Clevelander, let’s just say there’s more than one way to get to Cleveland, to borrow the book title, since corruption is a hard addiction to break.

Barring a legitimate explanation, it sure smells like pay for play. One would think that if there’s nothing to see here, at least some of these fine folks would explain what’s going on. But since none of the players want to speak, I reached out to the Los Angeles office of the FBI to see if this qualifies as pay-for-play, since Mr. Wesson has voted on AQMD issues at LA City Council, and had full control of its agenda as LA City Council president for nearly a decade.

They’re looking into it.

I simultaneously reached out to two other elected officials who serve on the AQMD’s Governing Board, LA County Supervisor Kathryn Barger and LA City Councilmember Joe Buscaino.

Barger’s office said she was in Sacramento and, given that she is new to the AQMD, may not know what’s going on, so we left open the door to speak upon her return. Buscaino didn’t get back to this column in time for publishing, so a field trip to the AQMD’s next meeting might be in order, if the various parties stay mum.

Next Tuesday, Mr. Wesson is running to become the next LA County Supervisor of the 2nd District, and faces formidable opponents including State Senator Holly Mitchell, who was endorsed by the LA Times, and former LA City Councilmember Jan Perry, who has worked as an economic development executive since leaving office.

If Mr. Wesson makes the runoff, there will be more to come, not the least of which is his on-the-job negligence that consequently reflects poorly on other government officials who got caught up, or played active roles, in his ruses.

And lastly, a quick note of thanks to Scott Johnson at Mayor Sam for this related write-up. Scott diligently continues the work of exposing corruption that was re-invented and re-invigorated on their site by its late, great founder Michael Higby.