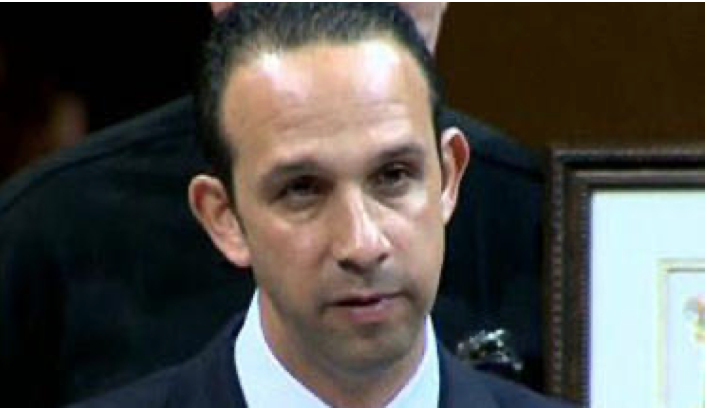 @THE GUSS REPORT-Welcome to the final few hours of the pre-felony existence of Mitch Englander, formerly of the Los Angeles City Council.

Englander is about to enter a federal courthouse in downtown LA in a few hours for an anticipated change of plea hearing to guilty in a case that had alleged he committed a variety of federal corruption crimes. He was facing decades in prison, but it now seems as though he will have to spend only a handful of birthdays in the federal pokey.

One wonders what deal might’ve been cut for Englander to spend years instead of decades in prison, but I digress. . .

Until recently, Englander made a career out of exploiting his personal family tragedies and attempted to portray himself as someone who he wasn’t, most disgracefully trying to list his career as “police officer” on an election ballot until a judge swatted down that false claim. Ultimately, Englander’s hubris saw him finish in fifth place in a field of just six legitimate candidates who got at least 10% of the votes in a race to become one of the five LA County Supervisors.

Englander’s family exploitation also included his and his wife Jane (who spells it Jayne on non-legal documents) appearing on the very first episode of “House Hunters.”  Englander recently deleted from his LinkedIn page his painfully short-lived, post-City Council gig with Oak View Group, a subsidiary of Azoff Co., which was founded by music mogul and long-time manager of The Eagles, Irving Azoff.

Still, who says crime doesn’t pay? Englander’s dirty green money and casino chips now have him living just a mile away from the blue of the Pacific Ocean, just one block off of trendy Montana Avenue in Santa Monica, where he was spotted tooling around one recent morning.

How exactly does one sell a house for $1.2 million and wind up in a $1.8 million unit in a posh five-plex when he is unemployed, unemployable, and the wife’s employment, at least according to some public records, seems vague at best? Perhaps recycling their cans and bottles all these years really paid off. . .

It would be fascinating to see the Englanders’ mortgage loan docs for the new home, though it would be even more intriguing if they didn’t need a loan for it. But what’s more compelling is this: Even while the FBI was closing in on him, Englander kept plotting his next career move or at least a narrative of one.

As we recently discovered in the federal charges against him, Englander has long known that he was in deep trouble with the feds because he sat for a series of interviews with the FBI and brought along a criminal defense attorney.

Who brings a defense attorney to speak with the FBI unless they know they’re in it up to their eyeballs?

Despite it all, last Christmas Eve, with his entire life in shambles, Englander filed a fictitious business statement with the LA County Registrar-Recorder for a government consulting entity named E-Venture. The filing lists Issue Strategies, Inc. as its owner, which the California Secretary of State says is owned by Jane Englander with Mitch Englander listed as its President, Secretary and Board member, and Jane as its CFO and Board member in a January 23, 2020 filing. The couple also registered the business with the City of Santa Monica, using their swanky new home as its business address.

With all of that, Jane makes no mention of either enterprise on her LinkedIn page, though for years, Mitch listed it as her business on his City of LA financial disclosure forms, with him claiming its fair market value of between just $2,000 and $10,000.

That is a heck of a lot of filing for a business that he has long claimed was worth less than the cash stuffed in an envelope and handed to him in a Vegas casino bathroom.

Funny thing with these Englanders: On his financial disclosure forms over the years, he listed the business entity’s address as 17272 Rainbow Ridge Circle in Granada Hills, while real estate records show that the couple lived at 17372 Rainbow Ridge Circle. If that’s just a typo, then it was a typo that appeared in prior Englander financial disclosure forms, as well. Heck of a coincidence.

Who the heck knows what this mish-mosh of vaguery and inconsistency represents. All these filings were made under penalty of perjury which, as we now know, is a concept foreign to Mr. Englander.

But it seems that poor, rich Mitch can’t get much of a break on anything anymore.

On March 26, 2020, just 63 days after their January 23 filing, the happy couple filed another Statement of Information for Issue Strategies, Inc. with the Secretary of State, with his name removed from it completely and only Jane Englander listed as the sole officer and Board member of the entity.

Whatever wackiness is going on in the Englander household, you gotta love Mitch’s optimism.

On his LinkedIn page, he claims the firm does “public relations, political consulting, environmental consulting, business consulting. . .with a work preference of in-person or remote.”