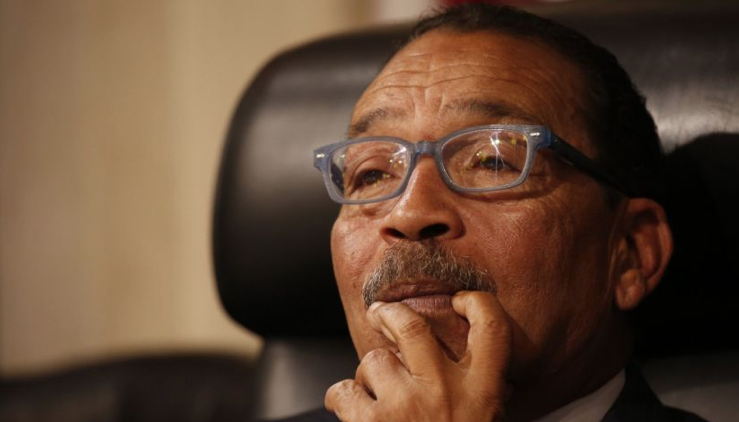 @TheGussReport – As shown in local headlines often prompted by this column, LA City Councilmember Herb Wesson loves to rig the game, big or small, if it enriches himself and his family.

Even his 2005 pursuit to represent City Council’s 10th District is rife with untruthful declarations about whether, when and where he and his family resided at the time.

Back then, establishing residency within the 10th District was an urgent matter for Wesson because he could not raise campaign funds to run to represent it unless and until he proved that he lived within it.  With others rushing to replace the suddenly departed Martin Ludlow, Wesson needed to create the illusion of living there except that voter registration records show that neither Wesson, his wife Fabian Wesson nor their four sons lived within the City of LA, let alone the 10th District, at the time.

Wesson has refused multiple opportunities to explain whether the couple lived apart for that decade while they raised their four sons or whether either or both of them voted illegally in polling precincts where they did not reside.

At least one of these allegations must be true and all of them might be true.

It’s worth reminding that Herb Wesson isn’t your average citizen who may not know where to vote.  He was Speaker of the California State Assembly at the time and had a strong hand in gerrymandering districts and knew every nuance of voting precincts in the state.

But hey, Herb Wesson was in a rush.  What’s a little fraud if it means a decade and a half of gainful employment for you, your wife and kids?  And this is precisely where Wesson’s other voter registration claims, and those of his wife and children, are rife with inconsistencies.

On June 22, 2005, voter registration records show that both Herb and Fabian Wesson moved to 1022 Citrus Avenue, an address within the City of LA’s 10th District.  But along the literal and figurative route to living there, Herb – but not Fabian – made a bizarre pit stop of sorts.

Before changing his, but not Fabian’s, voter registration to Citrus Avenue, Herb Wesson changed his voter registration to 3914 West Adams, a decidedly down-market address with bars on every window, at which address he swore under penalty of perjury that resided for just 20 days between June 2 and June 22, 2005.

Do you know what’s more curious than that? The West Adams address is, and was at the time, owned by an Anita Thomas, which is the same name as a cousin of Mr. Wesson’s, though he has also repeatedly refused to explain whether this was his relative’s property and whether he actually went to sleep there, had his bills sent there, et al during those 20 days.

Wesson, who has been in continual personal financial chaos for decades due to a series of mortgage defaults, credit card defaults and a three-way real estate transaction in which he lost a substantial amount of money, also didn’t claim rental income from the Bedford Avenue property on his financial disclosure forms for years.  That property, rented out by Wesson for use as a nursing home facility, was also cited for illegal conditions including appliances and indoor furniture being strewn-about the property’s yard.

Voter registration fraud – or the strong appearance of it – may also be a Wesson family business of sorts.

In 2008, Wesson and his wife both changed their voter registration to their current address on Virginia Road in the Mid City area.  Their youngest son, City Council aide Justin Wesson, then 26, claimed on his voter registration that he resided there with his parents and maintained that claim, voting in scores of elections there, until he reached the age of 36 (despite his six-figure City Hall income) even though his then-pregnant wife, City Council aide Alexis Marin-Wesson (also a six-figure income recipient) was registered to vote in another city, namely South Pasadena.

See the pattern there?

Bonus Nugget: Why does the office of controversial LA County Registrar-Recorder Dean C. Logan refuse to say whether these voter registration affidavits (not just the information on them) can be published and, if so, which parts, if any, need to be redacted?

Logan’s silence is curious, but consistent, with trying to block public scrutiny of these records.

For weeks in late 2018, Logan’s office dragged its feet in responding to my public records request for Justin Wesson’s most recent voter registration, which was made to determine whether he still claimed to live with his parents at age 36.  The rumor at the time, according to the LA Times, was that Justin Wesson was being floated as a 10th District replacement for his dad when he terms-out.  By trying to establish that he lived at his parents’ address on Virginia Road, he would presumably have established residency within the 10th.....even though his wife and baby lived in South Pasadena.

Sheer coincidence, Logan’s representatives claimed to me at the time.  But the smart money says sheer felonious corruption.

Herb Wesson has rigged the game for too many years now and government agencies went along with it. He is now running for the job of Supervisor of LA County’s 2nd District after years of playing with house money and rolling weighted dice.

Does the LA Times have the guts and independence to endorse someone other than Herb Wesson for LA County Supe, or does it look away at blatant corruption of its favorite son, as well?