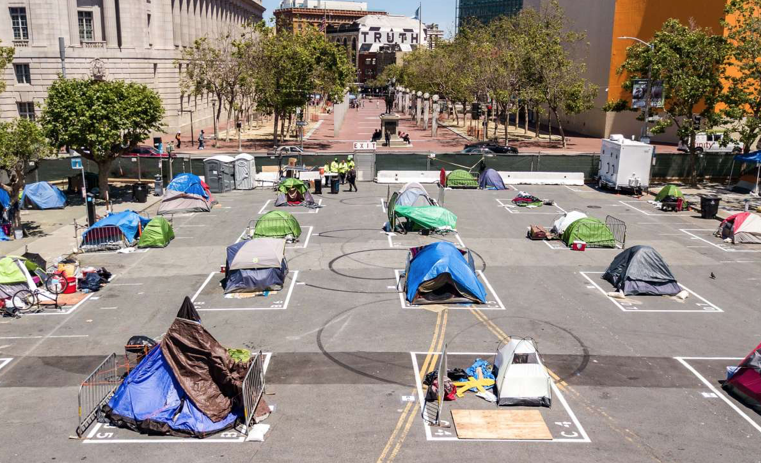 SALON REPORT--Rectangles are painted on the ground to encourage homeless people to keep social distancing at a city-sanctioned homeless encampment across from City Hall in San Francisco, California, on May 22, amid the novel coronavirus pandemic.

The rash of layoffs sparked by the coronavirus pandemic and statewide lockdowns are expected to increase homelessness by up to 45%, according to a new analysis by an economist at Columbia University.

The analysis estimates that about 250,000 people could be left homeless as a result of skyrocketing unemployment. The Department of Housing and Urban Development estimated that there were 568,000 homeless people in the country in January, before the outbreak.

Dr. Brendan O’Flaherty, a professor of economics who has studied homelessness for decades and conducted the analysis, said the projected rise would be “unprecedented.”

“No one living has seen an increase of 10% of unemployment in a month,” he said.

O’Flaherty’s model relied on homelessness data in an earlier study published by the Journal of Housing Economics in 2017, which found that every 1% increase to the unemployment rate corresponded with the homelessness rate rising by 0.65 per 10,000 people. The analysis used unemployment projections from the Economic Policy Institute, which predicted a 15.6% rate by July, and the Congressional Budget Office, which similarly projected a 16% unemployment rate by the summer.

“If the projections of unemployment being made now turn out to be accurate, and the relationship between unemployment and homelessness follows the historical pattern, and no other major changes occur, that’s what we can expect to happen,” O’Flaherty said.

But the unemployment rate could be far worse than those projections predict. The Bureau of Labor Statistics reported that the unemployment rate hit 14.7% in April, a level unseen since the Great Depression. That number hardly tells the whole story, as another 2.4 million Americans filed first-time unemployment claims this week — suggesting that the economic shock caused by the virus is far from over.

More than 38 million people have now filed for unemployment since the lockdowns began in March, representing nearly a quarter of the nation’s entire workforce.

In California, which already has the largest homeless population in the United States, Gov. Gavin Newsom said the state projects the unemployment rate to hit 24.5% this year.

The job losses have been worst among workers who already earned well below the national average.

“Among people who were working in February, almost 40% of those in households making less than $40,000 a year had lost a job in March,” Federal Reserve Chairman Jerome Powell said last week, citing a Fed survey. “This reversal of economic fortune has caused a level of pain that is hard to capture in words, as lives are upended amid great uncertainty about the future.”

A rising homelessness rate will exacerbate the health crisis, since many will be left without a home in which to isolate.

O’Flaherty’s analysis dovetails with what homelessness advocates are already seeing on the ground.

“I think we’re going to see a huge rise in displacement, homelessness, evictions — people who are already on the border, who are going to be stretched to the limit,” Andrea Henson, the lead organizer of the homeless outreach group Where do we go? Berkeley, told the San Jose Mercury News.

Congress has spent billions to boost unemployment benefits and help small businesses continue to pay their employees through the Paycheck Protection Program. But many small businesses, and the vast majority of minority-owned businesses, have been left without aid. Many laid-off workers have had difficulty navigating state unemployment systems that have been overwhelmed by claims. Republican lawmakers are already planning to cut off federal unemployment benefits when they expire in July — even though the latest unemployment claims show that the problem has not gone away even as all 50 states move to reopen.

Republicans said they are not interested in discussing another phase of relief until well into June and said the Democrats’ bill was “dead on arrival” in the Senate.

States like New York and cities like Los Angeles have announced eviction moratoriums but these are expected to expire within months.

“There will be a day of accounting,” Dan Flaming, the head of the Economic Roundtable, a Los Angeles-based nonprofit, told the Los Angeles Times. “When someone has three or four months rent due, what happens then?”

Flaming said there is clearly a “powerful connection between unemployment and homelessness” but the full effect won’t be felt for some time.

If homelessness skyrockets by mid-summer as the Columbia University analysis projects, it could have devastating results in the fall, when researchers expect a second wave of coronavirus infections to hit.

The Centers for Disease Control and Prevention found that the coronavirus spread aggressively through homeless shelters in major cities, especially those with severe outbreaks, according to a report published last month. Researchers found that homeless shelters that reported as little as two coronavirus cases in the preceding two weeks saw up to 66% of residents and 30% of staff infected.

“In some respects, the issue in shelters is similar to those in nursing homes or prisons,” Dr. Daniel Kuritzkes, chief of the division of infectious diseases at Brigham and Women’s Hospital in Boston, told Reuters. “The findings are … another example of how the epidemic has highlighted our shortcomings in terms of being able to protect some of our most vulnerable citizens.”

(Igor Derysh is a New York-based political writer whose work has appeared in the Los Angeles Times, Chicago Tribune, Boston Herald and Baltimore Sun. This piece was posted first in Salon.com)