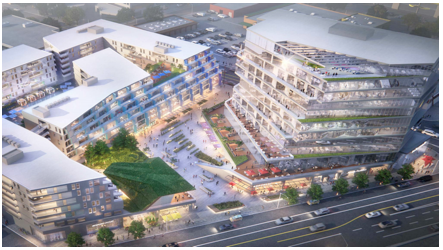 EASTSIDER-Every so often I forget that there is City Hall villainy over and beyond the Northeast’s very own trio of Jose Huizar, Gilbert Cedillo, and Mitch O’Farrell. Although led by Jose Huizar, as the Chair of the PLUM Committee, I do believe that this gang has approved enough mega-development to make the land subside by at least ten feet, and maybe even cause a shift in the tectonic plates. Heck, Eric Garcetti was a piker compared to these guys -- at least until he became Mayor and had more land to sell off.

On the other hand, a CityWatch reader contacted me with yet a different dastardly bend over, kiss the developer and sell out the community mega-development act perpetrated by another one of our model-of-integrity City Council members -- this time, Mike Bonin (CD 11). Take a look at the picture of the Martin Expo Town Center (photo above.) It reminds me of some planetary headquarters of the evil empire in a Star Wars movie.

Located on Bundy and Olympic Blvd., this monster ought to permanently block the ability of anyone to get from downtown LA to the Westside and vice versa. Not to mention that the folks who live there won’t be able to get anywhere at all. Proponents note that it’s being built near the Expo Line extension, I suppose implying, yet again, that mass transit will eliminate the need for cars in Los Angeles. But I seem to remember that the Expo Line is already overburdened with riders, so maybe this project can create a first in LA: Metro gridlock on one of their routes.

You might also remember Mr. Bonin for being the second to Herb Wesson’s original Airbnb motion, even while his constituents in Venice were being illegally evicted from their rent-controlled units that were replaced with Airbnb hotels. In fact, Councilmember Bonin is so beloved in Venice that some there are attempting get out of Los Angeles completely and form their own city, a move referred to as Vexit.

So what’s new with Bonin’s dialing for dollars on the Martin Expo Town Center?

Here are the details: In order to build the monster Martin Expo Town Center, the Council has to fiddle with the City’s General Plan to change the designation of the area from Light Manufacturing to General Commercial. This is not trivial, especially since the General Plan has not been changed for something like 20 years and going from a Cadillac dealership to a huge mixed-used mega-development is a huge change. We won’t even get into Community Plans. But there is a process that should be followed.

So why didn’t they do the same for the Martin Expo project? How about because Mr. Bonin has already partaken of the developer’s kool-aid?

Tuesday, September 20, was the last day for Council action on the General Plan Amendment/Zone Change for the Martin Expo Town Center. If the Council didn’t act by then, it would be goodbye to whatever goodies Bonin stands to get. But it turns out that there was a big “boo boo” in the PLUM Agenda: Planning filed a new Addendum to the Environmental Impact Report (EIR) on the day of the PLUM meeting. This meant that the items were out of compliance with the Brown Act so the PLUM Committee wouldn’t be able to discuss or vote on the items. And the last day to act was coming up, which meant they wouldn’t be able to fix it by having the PLUM Committee re-agendize the item and get Council to act before September 20.

For those who think I’m imagining things, the project was already set for the City Council meeting of Friday, September 16 -- obviously, assuming that the same PLUM Committee would have approved the project.

But this is the City of Los Angeles, so there’s always a way to fix the error and still ram through the project. The “powers that be” had the PLUM Committee “waive consideration of item” and quickly put the project directly on the City Council agenda for September 20, the last day for action. And guess what the vote was?

For a more detailed look at manipulation of the General Plan and planning in general in the City of Angels, take a look at Dick Platkin’s recent CityWatch articles. I particularly enjoyed, “Who’s In Charge at LA’s City Planning, the Queen of Hearts?”

And why, pray tell, would a City Councilmember resort to such obviously disingenuous behavior, evading the very spirit of open government and the Brown Act? How about pushback from the affected communities that are refusing to roll over for this repurposing of a Cadillac dealership that will cause the wholesale destruction of their deeply affected neighborhoods? Irony intended.

Sadly, Bonin is just a symptom of City Hall dysfunction. If you add up all of the recent actions by the City Council, I think the conclusion is inescapable. City Hall has contempt for our neighborhoods and Neighborhood Councils. Oh, they will have a Congress of Neighborhoods, and the elected officials will take pictures and hand out scrolls, but that’s it. Input not welcome. Charter reform? What Charter?

In addition to our own experiences in Northeast LA, and the current Martin Expo Town Center contretemps of Mr. Bonin, here are a couple of other recent developments which demonstrate my point.

First, as an exemplar of hubris, Council President Herb Wesson has announced that he will personally run Felipe Fuentes’ Council District (CD7) until next March when an election will take place. For those who missed this news item, Mr. Fuentes recently resigned his position to become a full time lobbyist in Sacramento. And no, I’m not making this up.

But Herb says “not to worry” because he will not vote on items for Council District 7. In short, many of our best and vocal Neighborhood Councils in the Valley and foothill areas will be disenfranchised until we have results for next year’s election. Talk about taxation without representation. I thought Fuentes’ throwing the Sunland/Tujunga Neighborhood Council out of City offices was reprehensible. But, boy, did I underestimate Herb’s ability to manipulate the system. This one was so raw it even took the LA Times by surprise.

It’s really a shame. Mr. Buscaino, a former LAPD officer, got elected on an honest, open and transparent platform back in the day when he replaced Janice Hahn.

I am at a loss to explain the behavior of our elected officials. Honest. We pay them close to $200,00 a year (the highest in the U.S.) They really don’t have to do much except collect a paycheck, and yet they all seem compelled to bend over for real estate developers and billboard companies, betraying their fiduciary obligations as public servants.

Anyhow, to end on a more positive note, there are a couple of things we can do. On the development end, sign up and vote for the Neighborhood Integrity Initiative. Campaign Director Jill Stewart’s very good article about it is here.  Second, the Neighborhood Councils have to figure out how to get together and organize on their own, knowing that BONC, DONE and the City Attorney are not our friends. LANCC is the logical place, but to make that work we need a charismatic figure who is willing to step up and reinvigorate the NCs into being the check and balance on City Hall that Charter Reform envisioned.