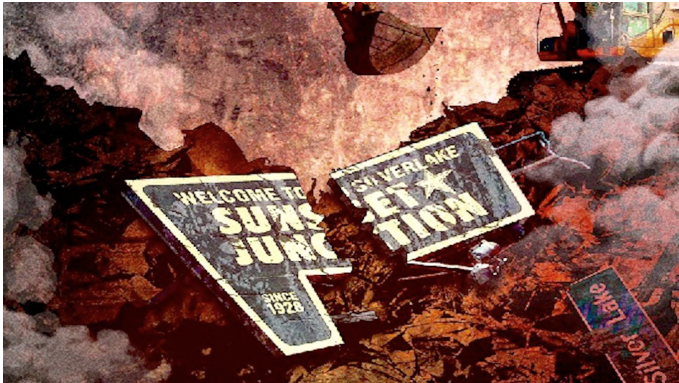 SPECIAL TO CITYWATCH--It's been an incredible few weeks for the Coalition to Preserve LA, a citywide movement of tens of thousands of Los Angeles residents who support the historic Neighborhood Integrity Initiative that, in a few days, will be officially certified by the LA City Clerk for placement on the March 7, 2017 ballot.

We've been honored by endorsements from working-class Latinos in MacArthur Park, Westlake and Elysian Valley (the longtime residents don't actually call it “Frogtown,” a disturbing indicator of the days when brutal gangs controlled the area) who are watching a frenzy of “zone changes” by the City Council that let developers build as big and as ugly as they wish, setting off gentrification and displacement of longtime residents that robs Los Angeles of its crucial working-class neighborhoods.

We've been delighted by endorsements from Westside professionals, attorneys and, yes, even developers, who make up such groups as the Brentwood Hills Homeowners Association and the Westwood Neighborhood Council.  Their members, people such as Debra Hockemeyer, Sandy Brown and Steve Sann are watching staggering new surface street gridlock from the Santa Monica border to La Cienega, traffic that radiates out one, two or even three miles from the mega-developments approved by City Council members during widely acknowledged backroom deals that break the zoning rules to profit a single developer.

We've been humbled by endorsements from important journalistic voices in South Los Angeles and Mid City, from two inspiring women who publish small, but respected, newspapers — Gloria Zuurveen of Pace News, and Dianne Lawrence of The Neighborhood News, and from the iconic Los Angeles Sentinel columnist Larry Aubry. All of them are appalled at plans for Cumulus, a 30-story luxury skyscraper in a single family neighborhood of South LA on La Cienega Jefferson Boulevard that sped through the rigged system that lets developers build whatever they wish, regardless of the zoning and rules.

We've been energized by endorsements from Richard Close and Cindy Cleghorn, who represent the trademark activism of the 1.8 million people in the San Fernando Valley and its foothills., a polyglot working-class and middle-class world where $2,500 one-bedroom buildings fashioned like inhumane glass cubes, approved in backroom deals with individual City Council members, are creating a devastating domino effect, prompting other landlords along the same blocks to slap on a coat of paint and dramatically raise their own rents, too, now that the area has been made “hot.” 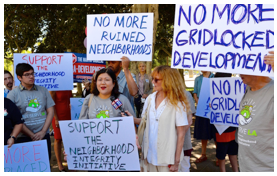 We've been thrilled by surprise endorsements from film stars Leonard DiCaprio, Kirsten Dunst, Garrett Hedlund, Chris Pine, Joaquin Phoenix and Chloe Sevigny, who are watching attempts by developers to transform such wonderfully livable areas as Silver Lake, Echo Park, Los Feliz and Studio City — all at risk of becoming the next Hollywood, California's most richly historic district that is now being methodically destroyed by the City Council to make way for skyscrapers.

We've been invited to meaningful meetings and phone chats with aides to City Councilman David Ryu (the sole Los Angeles City Council member who is interested in reforming that body's broken system of planning and developing Los Angeles), we've met with Mayor Eric Garcetti in his gracious and huge Old World conference room, and we've sat down with City Council President Herb Wesson. The meetings were all at their request, all to determine whether any serious reforms of City Hall's rigged system could be rushed into law, to stop the Neighborhood Integrity Initiative from appearing on the March ballot.

And during all of this time, we've been pummeled by much of the Los Angeles media, whose political reporters have yet to raise a finger to conduct any credible investigations of how these backroom deals between individual City Council members work, in which the council member accepts money, gifts and wining and dining from a developer. What actually goes on, and how, when City Council members privately agree to help that developer break the rules to build an outsized project such as the Martin Cadillac development in congestion-jammed West LA, or the towering Frank Gehry blob at the already gridlocked entrance to Laurel Canyon, yet another community under threat of destruction?

In the current state of Los Angeles journalism, of which I was an avid member for 35 years, business reporters have yet to produce a single report on how the backroom game pencils out, in which global financiers and developers have flooded LA with unwanted and unaffordable luxury rentals, yet still bring in plenty of profits while sitting on empty $8,000 penthouses, ghost condos and half-rented $3,500 rental towers. The city housing department admits to at least a 12% vacancy rate in these overbuilt glass boxes with which the City Council is fixated, their key source of campaign funding and evenings on the town. Yet for everyone else in living in Los Angeles, the vacancy rate is close to zero.

But that's OK, the campaign itself will probe these greed-driven deals, thanks to our crew that includes award-winning journalist Patrick Range McDonald, and the folk hero who stopped the $465 red light camera tickets by investigating the city's phony claims about what causes auto accidents, Jay Beeber.

All of this makes even more compelling the evening I spent on September 14 in a church in Westwood, where the Westwood Neighborhood Council endorsed our measure 8 to 1 — a key victory in the block by block battle to reform City Hall.

The room was oddly stacked with men from hipster neighborhoods east of Hollywood, who argued with passion that Los Angeles must become a city of towers and skyscrapers and give up its unique big-city, small-city lifestyle. Our paid opposition was there as well, a team slickly financed by three global development billionaires who have everything to gain from keeping City Hall's rigged backroom dealing intact: The Lowy family of Australia that controls $68 billion worth of Westfield Malls globally: Miami developer Sonny Kahn who controls, with his cousins, Crescent Heights Inc., which has filled Florida’s beachfront with skyscrapers; and Robert J. Lowe, the billionaire multinational luxury resort developer based in Los Angeles.

For me, among the voices who spoke eloquently for the Neighborhood Integrity Initiative, including respected former LA Building and Safety Commission Chairman Joyce Foster, and lifelong community defender Sandy Brown, the one who stood out was a soft-spoken developer trained in economics at UCLA who asked the Westwood Neighborhood Council to endorse our citizen initiative. John K. Heidt explained that “I am committed to following the rules, but I am competing in a system that favors the developers who create special relationships and are exempted from the rules.”

Heidt serves on the Permanent Supportive Housing Committee of the Ocean Park Community Center to help move the homeless into meaningful housing, and is not the first decent, fair-minded developer to back the Neighborhood Integrity Initiative. Heidt didn’t want to talk to the Westwood Neighborhood Council about the sexy and most-discussed element of our measure, which bans for two years the 5% of development in Los Angeles that is breaking the rules, destroying neighborhood character and jamming up the narrow or already overwhelmed streets where these projects do not belong.

Heidt wanted to talk instead about the profound reforms at the heart of the measure, that force our pay-to-play City Council members to end their backroom deals that soak up an enormous amount of their time and their staff’s time, and pivot back to their real jobs— long abandoned — of planning what Los Angeles should become during the next few years.

This planning, which is done in every well-run city but, incredibly, is not done in Los Angeles, means the writing of a General Plan that explains where and how the City Council plans to provide us our long-promised and far too rare city parks and protect our open spaces, how our council members plan to overcome their repeated failure to address our streets, sewers, water availability and overtaxed safety services, and — just one element among these many pressing needs — where and how Los Angeles will add office buildings, stores, restaurants and rental units over the next five years.

Even more important, through the Neighborhood Integrity Initiative, voters will force the City Council to update the city's 35 Community Plans, the Airport District Plan and the Harbor District Plan, and as a new lever of power, we will require the City Planning Commission to hold all of its Community Plan meetings out in the neighborhoods --- and the meetings must be held at night and on weekends only.

This deceptively simple new lever of power brings the debates over what Los Angeles should become directly back to the neighborhoods, a radical change that will all but end the sparse downtown City Hall 10 a.m. hearings that few working people can attend, and which I, as a journalist, noted were dominated by the “suits,” the paid lobbyists for the developers.

It is through the Community Plans that the city's badly backfiring policies will finally be debated and influenced by the residents themselves, on such topics as Small Lot Subdivisions (city records from 2005 show that these towering, skinny, $1 million homes were supposed to be affordable housing for first-time buyers), Mansionization (the latest fix falls far short for many areas of the city), Airbnbs (city planners and the City Council are clueless about how many affordable units are being lost to this trend in touristy areas such as Venice that cannot afford to lose a single apartment unit), and Granny Flats (city planners and the City Council are unprepared in their rush to correct their illegal “second dwelling” policies, quietly implemented without community debate in a backroom meeting years ago).

Wonky, yet far more important than anything else, the Neighborhood Integrity Initiative is behavior modification aimed at the Los Angeles City Council. This historic citizen initiative forces these 15 elected leaders to do their jobs, requiring them to pivot away from their wildly inappropriate roles as closed-door real estate dealers — a job for which they are woefully unqualified.

The Neighborhood Integrity Initiative hands power to the communities, something that should have been done decades ago.

(Jill Stewart, a former journalist,  is campaign director for the Coalition to Preserve LA, sponsor of the Neighborhood Integrity Initiative.)