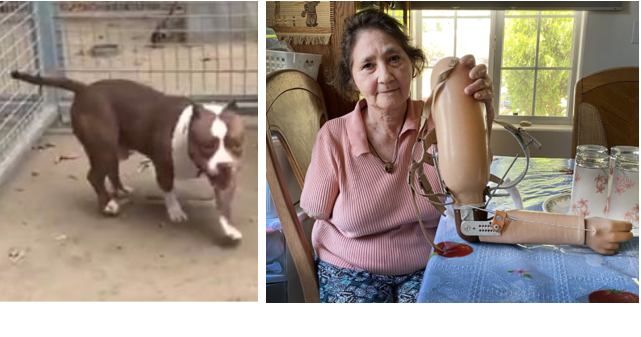 The injuries to her right forearm were reportedly described by a Los Angeles Police Officer who was a first responder, as “looking like it went through a meat grinder and the bones were broken.”

O'Gee had been first captured on May 25, 2020, by LA Animal Services Officers, assisted by LAPD, after he viciously chased and attacked a jogger running on a public street. A resident in the area said a posting on a Valley-community blog matched this description of a Pit Bull attack on 5/25 and also stated that “an LAFD ambulance transported a male victim after he was badly chewed up and they were trying to stop the bleeding."

Upon impounding the stray Pit Bull at the East Valley shelter, an  LA Animal Services employee entered in the  behavioral notes, "If an owner claims [the dog], see Senior ACO or OIC (Officer in Charge).  A PDA [Potentially Dangerous Animal] case needs to be started."

That note was apparently not shared with the latest victim's son, who brought his 14-year-old daughter with him to choose a family dog after GM Barnette's media plea to adopt a senior (adult) dog. Barnette made two dangerous assertions in her message about shelter dog adoption, "Bringing a trustworthy pet companion can provide a sense of security;" and "most everyone, but especially seniors, will say that companion animals are their friends."

Just because a Pit Bull, or any dog, is an adult -- or even a senior dog -- does not assure it will make a safe, "trustworthy pet” and/or be your friend (especially after a known-vicious attack) -- which the Alvarado family found out in a tragic way. 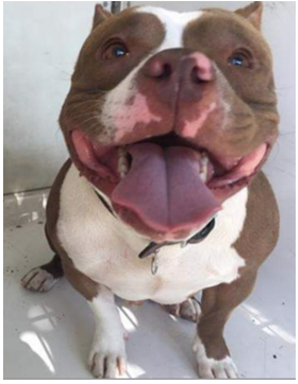 An important LAAS behavioral comment that was missing in the adoption posts was that "O’Gee, (photo left) an unneutered male Pit Bull was picked up as a stray because he made a vicious attack on a 30-year-old jogger."

So, after being held at an LA Animal Services shelter for an observation/rabies quarantine period, since no microchip was found, O'Gee was made available for adoption.

On the social-media promotion by LA Animal Services’ volunteers with a photo of O’Gee, all that is stated is, “O’gee is enjoying all the attention!” (Followed by an emoji with two-hearts for eyes.)

THE PUBLIC SHOULD BE ABLE TO TRUST LA CITY

The following is compiled from LA Animal Services’ documents obtained through a California Public Records Act request and used for a CityWatch, November 16, 2020, article on this attack. (See Pit Bull Adopted from LAAS Shelter Attacks - Victim Hospitalized in Critical Condition.)

It is a glimpse of this painful and heartbreaking tragedy that in just a few agonizing minutes robbed a devoted husband of the wife with whom he shared life’s many  activities and deprived an entire family of the mother and grandmother they knew and loved and the future they all planned together. Angelia Alvarado—who was an avid gardener--will never be physically or emotionally the same:

And, it was avoidable, if the City of Los Angeles and LA Animal Services' management had acted responsibly and truthfully.

VICTIM'S ARM ‘SHREDDED LIKE IT WENT THROUGH A MEAT GRINDER’

An adult Pit Bull, named O'Gee, was adopted from a Los Angeles Animal Services' Valley shelter on June 18, 2020, and inflicted life-threatening injuries to the owner's mother on September 26.

A first-responder LAPD officer was asked by the Animal Control officer to describe what he observed regarding the injuries to the victim, and he said, "right forearm appeared to be completely shredded, like it went through a meat grinder and the bones were broken. Her left arm had multiple bite wounds with fatty tissue oozing out of the lacerations."

LA Fire Department reported it had to "use the fire hose on full blast to keep the dog away" as they tried to provide emergency medical treatment before removing the victim from the property.

Paramedics at the scene told the responding LAAS Animal Control Officer upon arrival that the dog "broke the victim's arm in half and nearly severed the arm from the woman."

Per the victim's son at that time, "she was having emergency surgery and was in critical condition only a couple of hours after the attack took place."

Another terrifying and inexcusable aspect is that it could be any one of us on any day, unless highly paid City officials begin to act like responsible adults, who are there for the job -- not just the photo-ops.

This terrible accident happened for three reasons which were all the City’s fault.

First, a disclosure law was broken.

In January 2020, California became the second state in the USA to require all public and private animal shelters to give people a written description of a dog’s bite history including the circumstances of each bite, when the dog is being adopted-out.

In this case, the pit bull would not have been adopted if the City made the mandatory disclosure. By not doing so, the City broke the law and caused this accident, and therefore must be held responsible.

Second, a rule of common decency was broken.

When anything is wrong with a dog, whoever is giving it away to the new owner has to say what’s wrong with it, whether the dog is crippled or has allergies or likes to jump on people or has bitten anyone. Courts everywhere have ruled for hundreds of years that giving this information is not discretionary and failing to give it is negligent. So, in this case, the City is responsible for this accident because employees of the shelter did not tell the pit bull's new owner about the circumstances of the attack on the jogger.

Third, the people in command dropped the ball.

Los Angeles politicians want the City to have “no kill” shelters, which are those that find homes for at least 90% of the animals in custody. This is a wonderful but unrealistic goal because many dogs are confiscated after hurting someone. An unintended consequence is that a number of vicious dogs get released to increase the City’s “no kill” statistics at the expense of public safety.

When this happens, it is not the result of making a bad decision, but making no decision at all, just a slavish adherence to the “no kill” philosophy.

We count on animal control departments to protect us, and when they drop the ball, as they did here, the City must be held responsible to compensate the people who get hurt.

LA CITY DID NOT RESPOND TO THE VICTIM OR HER HUSBAND

In this case, Attorney Phillips states, “The elderly victim and her husband notified the City of their damages in January 2021 but the City did not even respond. They then retained me to file a lawsuit to get justice and force the City to recognize its obligation to be truthful with people who want a friendly companion animal for themselves and their children.”

The Complaint was filed in the Los Angeles Superior Court on July 29, 2021 and given Case No. 21STCV27837. Its title is “Argelia Alvarado and Jose Alvarado v. City of Los Angeles and Does 1 through 10.

$20-MILLION AWARD TO VICTIMS OF DOG ATTACK IN EXETER, CA

Although the circumstances were different, a California jury decided just last week, on July 31, that City negligence must not be tolerated in regard to the public being safe from a dangerous dog.

The incident involved two victims -- a senior female resident was horrifically mauled and the man who attempted to rescue her was fatally attacked by the dog.

In 2016, the Exeter Police Department retired one of its K-9 dogs and sold it to its human "partner" and former handler, Officer Alex Geiger.  Four months after the bite-trained dog went to live with Geiger as a "pet," it chewed through a fence, chased a mailman, attacked a 90-year-old woman, and killed the Good Samaritan who tried to save her.

Geiger was charged with involuntary manslaughter and criminal negligence but was found ‘not guilty.’

Both the injured woman and the family of the rescuer sued the City of Exeter. Rather than work out a settlement, Exeter decided to take the civil case to trial.

“The City's decision to go to take the case to trial was sheer folly,” commented Attorney Ken Phillips.  "It was one of the worst legal strategies I have ever seen. They should have paid a few million instead of rolling the dice and losing twenty."

"Did the City of Exeter believe it would get off because the officer who took the retired K-9 was not found guilty? Let's not forget that the ‘not guilty’ verdict at O.J. Simpson's criminal trial was quickly followed by a $33-million judgment at the civil case," Phillips explained.

"People are angry at tone-deaf government at all levels, and jurors are made up of people,” he continued.

“We rely on our police and animal control departments to protect our neighborhoods from vicious dogs. When public servants put vicious dogs into our homes, they endanger us. It is infuriating to see this happen again and again; and, therefore, these civil cases are totally necessary to send a message to these officials that putting human lives at risk for the purpose of saving a vicious dog is intolerable.”

WHY IS THIS HAPPENING?

Dog attacks -- Pit Bulls, in particular -- are increasing in Los Angeles and across the nation. As Attorney Ken Phillips points out, it is the result of the animal shelters ignoring public safety and following the nationwide "no kill" policy promoted by major non-profit organizations.

This means that 90% of impounded animals are kept alive, regardless of aggressive history or dangerous behavior, and they are released either to adopters, fosters or to "rescuers" who adopt them out to the public -- with the City thus seeking absolution from liability.

The payoff is that the organizations then can advertise that they are assisting shelters become “no kill” and reap the benefits in public empathy and in the form of increased, generous donations.

Dog-bite attorney Ken Phillips is calling this cruel and irresponsible violation of the public’s trust to the City's and the public’s attention by demanding justice in court for Angelia and Jose Alvarado and their family, who did nothing wrong -- other than trust the City of Los Angeles and LA Animal Services.

A photo taken of Angelia Alvarado in June 2021 (see above) shows her holding a prosthetic arm she is now learning how to use. Her left hand and arm also sustained serious permanent damage  as she tried to defend herself from the Pit Bull attack at her home by O'Gee.

Here are just a few recent reports on the many heart-wrenching attacks involving known-dangerous dogs: