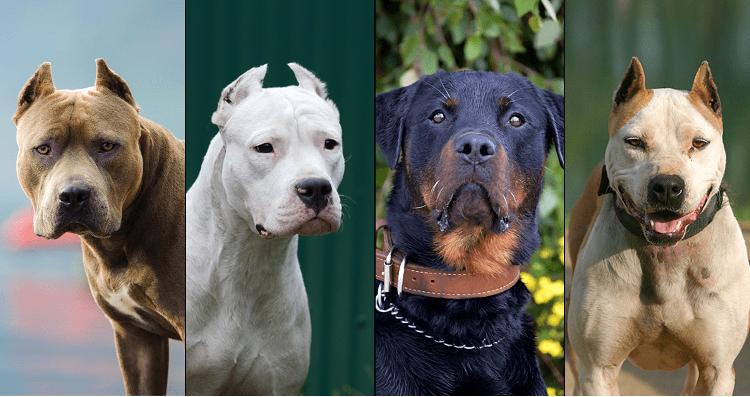 ANIMAL WATCH-Los Angeles Animal Services GM Brenda Barnette issued a media release this week urging  adoption of a "senior" ( adult) shelter dog from Los Angeles city shelters -- most of which are Pit Bulls of unknown age and behavioral history because many are picked up as strays.

Barnette makes two dangerous assertions in this message about shelter dog adoption, "Bringing a trustworthy pet companion can provide a sense of security;" and "most everyone, but especially seniors, will say that companion animals are their friends."

Just because a Pit Bull, or any dog, is an adult -- or a possible “senior” dog -- does not assure it will make a safe, "trustworthy pet." And there is also the very long and alarming history of LAAS, under Barnette's management, releasing or adopting out dogs with a known background of serious aggression.

Following is just one of the latest examples of a dog put up for adoption to the public by LA Animal Services after being impounded for a known vicious attack. This was not reported earlier due to the horrendous damage done to the mother of the adopter, who at last report was still hospitalized and in critical, declining condition.

VICTIM'S ARM ‘SHREDDED LIKE IT WENT THROUGH A MEAT GRINDER’ 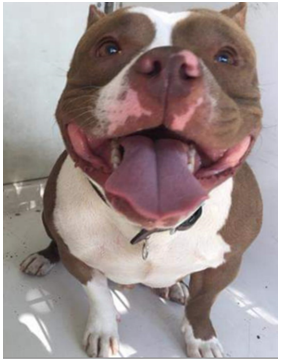 An adult Pit Bull, named O'Gee, (photo, left) was adopted from a Los Angeles Animal Services' Valley shelter on June 18, 2020, and inflicted life-threatening injuries to the owner's mother on September 26.

A first-responder LAPD officer was asked by the Animal Control officer to describe what he observed regarding the injuries to the victim, and he said, "right forearm appeared to be completely shredded, like it went through a meat grinder and the bones were broken. Her left arm had multiple bite wounds with fatty tissue oozing out of the lacerations."

LA Fire Department reported it had to "use the fire hose on full blast to keep the dog away" as they tried to provide emergency medical treatment before removing the victim from the property.

Paramedics at the scene told the responding LAAS Animal Control Officer upon arrival that the dog "broke the victim's arm in half and nearly severed the arm from the woman."

Per the victim's son at that time, "she was having emergency surgery and was in critical condition only a couple of hours after the attack took place."

LA Animal Services had posted a photo/video of O'Gee with a volunteer, which stated, "O'gee (#A1938389) is enjoying all of the attention!"

A smiley face with hearts for eyes was shown, followed by, "O'gee is 3 years old & and weighs 43 lbs. If you are interested in adopting or fostering O'gee, please contact our East Valley Center."

This does not mention the attack by O'GEE that brought him into the shelter.

On May 25, a note about this dog in LAAS shelter records reads, "If an owner claims, see Senior ACO or OIC (Officer in Charge). A PDA [Potentially Dangerous Animal] case needs to be started."

O'GEE, an unneutered male Pit Bull was picked up as a stray "Brown and White Mixed Breed with an Unknown Owner," because he made a "VICIOUS" ATTACK ON A 30-YEAR OLD PEDESTRIAN (JOGGER).

(Note: A CityWatch reader contacted me shortly after this date about a post on a Valley community blog that matched this description of a Pit Bull attack on 5/25 and stated that an LAFD ambulance transported a male victim after he was "badly chewed up and they were trying to stop the bleeding.")

However, O'GEE was released by the shelter from OBS (observation/rabies quarantine period) on 6/08/20. No Microchip was found, so he was made available for adoption.

A NEW HOME FOUND FOR O'GEE IN ONE DAY

The next description by an employee in the kennel records on 6/13 reads:

"Ok'd by Supervision to move to main kennels. This dog has been very easy to work with.  Extremely friendly with me in the kennel, goes to cubby when commanded so I can clean. When I took him out, however, he is fearful when on a leash. He's not a puller, he just doesn't want to walk when leash is on. I would stoop down from time to time to encourage him to follow me, which he would do. When we got to his kennel, I kneeled down to remove the leash and he promptly jumped into my lap."

ADOPT A1938389 -" i advised him about the behavior and he understands that he will have to sign a bite waiver."

(There is no explanation of which behavior was discussed/emphasized with the potential adopter -- the severity of the attack on the jogger or the friendliness with the shelter employee.)

On 6/20 O'Gee was adopted (after being neutered and microchipped.)

On 9/26/20 a new series of comments begin about O'Gee, apparently by a shelter veterinarian or an RVT, who describes doing a "Visual exam due to temperament.  Presented as OBS - severely bit owner just prior to presentation. Patient (O'Gee) is covered in dried blood over front half of body - no wounds found on body, blood is from owner's injuries."

"Pt. had very soft body language when on Intake an in Receiving, but after he was placed in kennel, I walked past to look at another dog and he suddenly lunged at me, jumping up toward my face. His body hit the kennel door so hard that he knocked himself onto his back, then quickly rose up again and continually lunged at me until I had left"

On 9/26/20, the shelter description of the victim's injury states that the 70-year-old mother of the owner was attacked by O'Gee in the "rear yard."

The attack is described as "BOTH ARMS." Severity is "CRITICAL." Circumstance was, "UNPROVOKED."  The record states it occurred at 10:00 AM. and that there had been "PRIOR BITES."

‘VICTIM WAS TAKEN TO NORTHRIDGE HOSPITAL FOR EMERGENCY’

The synopsis by shelter staff at intake was. "This dog was involved in a major attack against its own family member, she was severely injured and hospitalized with threatening wounds to her body. According to the owner, it has a history of extremely unpredictable behavior and should be euth."

"Upon my arrival, I spoke with LAFD personnel on scene who stated the victim was rushed to the hospital. . .the paramedics stated "the dog broke the victim's arm in half and nearly severed the arm from the woman."

"LAPD officers advised me that the woman was in her own rear yard with the dog when the dog violently attacked her. I entered the rear yard of the property and immediately observed an abundant amount of blood which painted the entire rear patio and much of the rear wall of the house and table on the patio. I turned to the back of the rear yard and saw a small, brown and white, pit bull mix dog which was covered in what appeared to be blood. The LAPD verified that the dog covered in blood was the attacking dog. After many minutes with the assistance of a few LAPD officers, i caught he dog with my ACD and walked the dog to my animal control vehicle for impound."

"(After arriving at shelter) - I handed O'GEE over to medical staff for intake. . .and observed O'GEE react negatively. . .O'GEE lunged at the RVT who was checking him. Luckily O'GEE was muzzled and no further incident took place."

"I took the dog owner information, identified by the microchip and I contacted dog owner, who immediately ordered to have O'GEE 'put down"...was adamant about wishing for  the Department of Animal Services to euthanize O'GEE for "attacking and almost killing" his Mom...dog owner arrived at the EVA shelter to owner surrender his dog "O'GEE."

He stated that O'GEE needs to be euthanized because this is not the first attack to his family. Stated O'GEE had attacked his nephew not too long ago and snapped at his mother yesterday." [Owner] was pleading with me and ACT supervisor. . .to euthanize the dog because of its behavior issues. . .concluded stating he does not wish for this to happen to anyone else and stated it is guaranteed to happen again if the dog does not get "put down."

The records show it was 9/26/20 at 11:16 a.m. when O'GEE's owner officially surrendered him to LA Animal Services. However, from that time until 3:57 p.m. there is no record provided of ANY communication between LAAS shelter staff or supervisors, managers, RVT/veterinarian with GM Brenda Barnette regarding this incident.

The Public Records Act Request was for ALL communications. So does this absence of such records mean that no one at any level of management was alerted for almost five hours that the mother of an adopted Pit Bull had been critically attacked?

At 4:20 p.m. Gerald Hill wrote in response to an e-mail by Chief Veterinarian Jeremy Prupas to Brenda Barnette on which he is cc'd, "I agree with you, we as leadership have expressed our concerns and decisions and I feel we need to move forward."

WHERE ARE THE COPIES OF THOSE ‘CONCERNS AND DECISIONS’?

Or does this mean that management of LA Animal Services withheld information which they are required by law to provide under a CPRA request?

Finally, at 3:57 p.m. Brenda Barnette sent an e-mail to Chief Veterinarian Jeremy Prupas, which appears to advise him for the first time about this. (It is not cc'd to her Assistant GM Tammy Watson nor to the President of the Commission, Larry Gross, and is addressed only to two members of the upper shelter management team.)

This is what Barnette wrote:

"This dog was admitted to EV today. Mother was chewed up, son said she is in critical condition and in surgery. Son says dog is dangerous and want euthanized ASAP. He said his mother has only taken care of the dog. Below is proof of Rabies Vac. Can we euthanize and not wait 10 days?"

Dr. Prupas responded promptly at 3:59 p.m., "that sounds horrible :(( we can euth but we still need to send in the head." This was followed at 4:01 by, "I think we need to find out how the dog is acting at the shelter,"  and at 4:02 p.m. "and some kind of proof that the attack happened. Is there a bite report? Sorry. . .just trying to cover all the bases."

At 4:22 p.m. Dr. Prupas writes, "I spoke with Dr. Land. She agrees that this dog is a big safety issue for staff and will go ahead with the euthanasia."

GM Barnette's final e-mail DID NOT express any intention to avoid such a future event nor did it thank the Animal Control Officer and shelter staff for safely and humanely handling this situation. At 6:30 p.m. she simply wrote, "Thanks, everyone."

Would GM Brenda Barnette have euthanized the Pit Bull that attacked this elderly mother if the son had not begged the shelter to stop the dog from attacking again? Can we believe her post urging adoptions from LA Animal shelters and implying they are  "trustworthy pets?