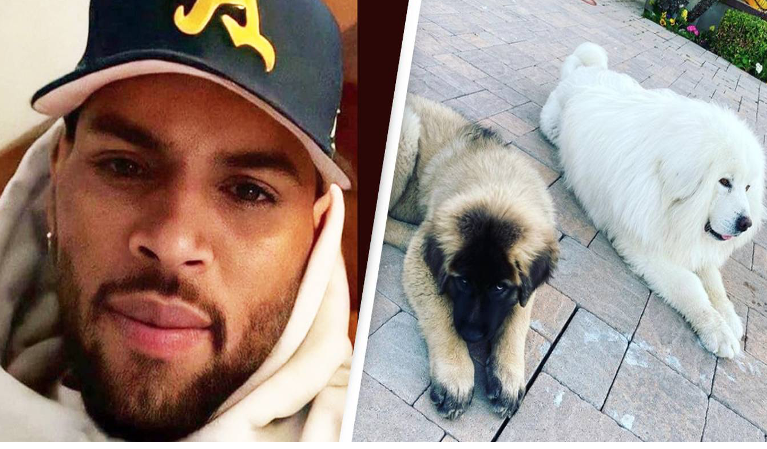 On April 13, 2021, a lawsuit for “Other Personal Injury/Property Damage/Wrongful Death (General Jurisdiction)” was filed in Los Angeles Superior Court (Case No. 21STCV13947), but not on behalf of the dog-bite victim, Maria Soledad Avila, who was attacked, but by her sister, Patricia Avila, who was present at the time helping with the cleaning of Brown’s home at 19602 Citrus Ridge Drive, Tarzana, CA.

Maria was viciously attacked by the giant dog, named “Hades,” alleged to be owned by Chris Brown in the lawsuit, after walking out the door into the backyard to empty a vacuum cleaner. Although she had previously heard dogs barking in a confined area on the property, she did not know the dog was loose in the yard that day nor had she previously seen him.

Patricia claims that she was also a victim because, “ever since the incident, she has suffered severe emotional distress. . .post-traumatic stress disorder, insomnia, weight loss, loss of appetite...severe anxiety, depression, fear, extreme sadness for her sister, and panic attacks.”

In the legal action against Brown, she states that she now unable to work because she “is reluctant to leave her home and cannot stop re-living the pain that she experienced as she watched her sister suffer through that horrendous attack that day,” and that she is undergoing treatment through Kaiser Hospital for her emotional distress.

Patricia Avila alleges that Chris Brown’s acts and/or omissions were a substantial factor in causing this harm to her and she has suffered economic damages and past, present, and future loss of wages and medical expenses. No specific dollar amount is indicated.

Patricia describes how the two women were hired by Chris Brown in November 2020 and were paid $600 per day to clean the residence twice a week. According to an earlier article, this was only the second time they had worked at Chris Brown’s home. (The dog was later identified as a 1 ½-year old Caucasian Ovcharka Shepherd, named “Hades.”)

The lawsuit states that, after Maria entered the backyard, Patricia suddenly heard a dog violently barking and growling and the dog proceeded “to viciously attack Maria.” At that time Patricia was working inside the house. She recalls that the screams were so bad that it caused her to immediately run outside, “where she found her sister covered in blood while she was screaming and crying for help.”

THE CLAIMS AGAINST CHRIS BROWN

Patricia’s lawsuit is based (in part) on California’s strict-liability law, which states that, “The owner of any dog is liable for the damages suffered by any person who is bitten by the dog while in a public place or lawfully in a private place, including the property of the owner of the dog, regardless of the former viciousness of the dog or the owner’s knowledge of such viciousness.”

She also asserts that Chris Brown “had a legal duty of care to protect his invitees and workers that were on his property from unreasonable risk of harm,” which included Patricia and her sister, Maria. The lawsuit continues that the attack occurred as a result of Chris Brown failing to supervise, control and prevent the dangerous condition existing on his property and failing to adequately warn of the dangerous condition on the property, which “has proximately caused” Patricia to suffer emotional distress. This has resulted in “her inability to work and suffering severe emotional distress symptoms, which include “insomnia, anxiety, depression, fear, sadness for her sister, grief, horror, panic attacks, loss of sleep, and a reluctance to leave her home.”

However, after this attack, the owner of “Hades” was identified by City and County officials as Emil Lewis. The dog was immediately removed from the property, reportedly by a security guard, and taken to Humboldt County, before emergency responders arrived.  It was also claimed that neither Chris Brown, nor the person who was identified later from the dog’s microchip, were at the home when the attack occurred.

Although this does not relieve Brown from his obligation to provide a safe environment or notice of any dangerous situation, this differs substantially from the description in the lawsuit. (See: Dog Attack at Singer-Rapper Chris Brown’s Home Raises Questions)

Patricia Avila is represented by Attorney Michael C. Murphy, who is requesting a jury trial.

Here’s a brief professional and financial profile of Chris Brown, for those not familiar with the details of the popular rapper/singer’s career. According to WealthyGorilla.com, Chris Brown is 31 years old and has already attained an estimated net worth of $50 million. Brown is also a songwriter, dancer, and actor, with multiple songs featured in the Billboard Top 100 and a string of awards.

His home in the City of Los Angeles Valley community of Tarzana at 19602 Citrus Ridge Drive, where the dog attack occurred, is described as a “smart house,” believed to have cost Brown $4.3 million and is “surrounded by 7-foot high walls and has a total of 16 security cameras.”

WHAT WE KNOW ABOUT ‘HADES’ AND THE ATTACK

CityWatch was informed about this attack by a neighbor shortly after it occurred, and I promptly submitted California Public Records Act Requests to the various City and County departments that were involved. This included Los Angeles Fire Department, LAPD, Los Angeles Animal Services, Los Angeles County Public Health, and Humboldt County Sheriff’s Animal Shelter, all of which responded.

These investigations and responses were provided in a series of three articles, and all need to be read for a complete understanding of this tragic, and important, case:

However, in regard to the filing of this lawsuit against Chris Brown, which includes the usual Does 1 – 50, meaning other defendants could be named, we can’t help but wonder if the City of Los Angeles/LA Animal Services will be included due to the claims that this dog had already been declared “dangerous” in the City of Los Angeles, and that is where this incident occurred.

The procedure which is outlined by GM Brenda Barnette at each Commission hearing for a “Dangerous Animal,” in this case a dog, is to either allow the owner to place it at an address outside the City limits or surrender it to LA Animal Services (which may release it to a “rescue” or euthanize it.)

Also, there is a requirement that any dog declared “dangerous” will be neutered. (Although Hades was later discovered to be microchipped, that could have been done by the breeder.) So, did LA Animal Services violate its own rules?

INFORMATION ON ‘HADES’ AND OWNER FROM VARIOUS DOCUMENTS

The very large dog, reportedly a Caucasian Ovcharka Shepherd, named “Hades,” had been removed immediately from the 19602 Citrus Ridge Drive location after the attack and before the less-than ten-minute response by Los Angeles Fire Department and Police Department.

Information provided to LAPD identified the owner of the dog as a “Bodyguard of (redacted name.)”

The owner of the dog which allegedly attacked is reported In the Public Health report as "Emil Lewis," who claims his address is 19602 Citrus Ridge Drive, Tarzana—the single-family residence belonging to Chris Brown.

The investigating officer for Los Aneles Animal Services later showed a photo of the dog to the victim in the hospital and wrote:

I advised Victim and her son that I would show Victim a photograph of a dog and to let me know if she was able to recognize the dog. I presented the photograph of a dog provided by D/O (redacted name of dog owner) to Victim and she immediately recoiled and began sobbing uncontrollably, apparently still traumatized by the attack.

The dog owner signed the owner-surrender form (with attached photos of the dog), with the remarks by Humboldt Sheriff's Office Animal Shelter, "Dangerous/vicious dog from LA."  The owner wrote on the surrender form that the dog was not neutered or housebroken and is "unpredictable." (The kennel photo of the impounded dog is dark, but the breed is identifiable as a large Caucasian Shepherd. It shows the name "HADES," with the comment, "People Aggressive.") [Emph. added]

In a later email, the LAAS officer wrote, "The address where the dog was maintained and where (redacted name) claims partial residence is the one listed. . .Citrus Ridge Drive."  (However, Hades was not licensed at that address.)

I asked for an opinion by someone who specializes in Animal Law, and got this response:

The City, LA Animal Services and General Manager Brenda Barnette could have potential liability if it can be shown that “Hades” had been declared a dangerous dog, and LAAS failed to adequately ensure public safety after that.

Once a dog is declared, and LAAS knows that it could harm someone again, they have a duty to place adequate restrictions on the dog—and the people who possess it—to ensure that rules are followed to keep people safe. That means more than just placing a label on the dog and kicking it out of the City so that it can continue to maul or even kill people (so long as they don’t live in the City).

The City should take steps to monitor the compliance with the restrictions that are placed for public safety.  Failing to do so could be deemed to be actionable negligence.”