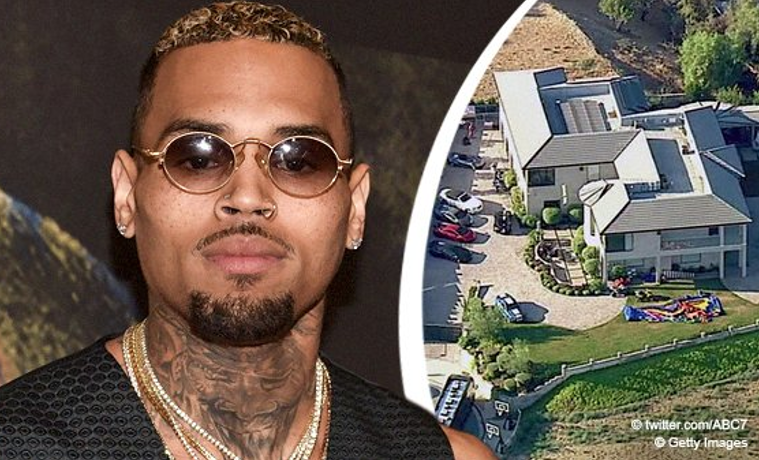 Public records obtained do not state whether Pit Bull breeder Chris Brown was home at the time, and the identity of the dog which attacked is in question.

City records confirm that LA Fire Department responded to a call on 12/12/2020 at the Tarzana address, arriving at 5:13 p.m. and leaving at 5:19 to transport a woman mauled by a dog to Northridge Hospital. (Photos show horrific dog bite wounds which tore the flesh from her face and right arm.)

The victim was reportedly Brown's housekeeper, who "while doing her duties was severely bitten on the right arm and left side of her face by a dog within the dwelling." “VICTIM TRANSPORTED TO NORTHRIDGE ER HOSPITAL for SX (surgery)," according to the Los Angeles County Public Health Department report. It further states, regarding type of treatment, "UNKNOWN SURGERY REPORTED."

A neighborhood source speculated the attack was by a Pit Bull, named Hades, owned by Chris Brown, but emergency responders state that there was no dog on the property when they arrived (within nine minutes) after the call was received.

Brown advertised in 2012 that he had bred his Pit Bull, and he posted numerous photos of the puppies he was selling on an Internet site called "CB Breeds" for $1,000 each. He received an immediate flurry of vitriolic comments from animal activists denouncing him for not encouraging adoption of homeless Pits in animal shelters, rather than adding to the overpopulation problem.

This story took some strange twists. The owner of the dog which allegedly attacked is reported In the Public Health report as "Emil Lewis," who claims his address is 19602 Citrus Ridge Drive, Tarzana—the single-family home owned by Chris Brown and where Brown purportedly resides also. (This address was made very public when Brown  advertised a giant yard sale in 2019.)

The breed of the dog and physical description were first listed as "UNKNOWN," as was its rabies vaccination status. The dog was not impounded, according to the report, where an entry reads, "REPORTED BY LAPD - LIMITED INFORMATION" and "Agency taking report: Los Angeles Animal Services."

Under the "QUARANTINE" section, the dog was listed as MALE, CAUCASIAN OVCHARKA, with no other information except that the [rabies] vaccination was not current, and the dog had never been seen by a Public Health veterinarian.

The remarks box states,"1/08/21 Made contact with owner Emil Lewis at 19602 Citrus Ridge Dr., via landline. He stated the animal was impounded by the East Valley Shelter the day of the incident and that he went to the shelter 10 days later to sign a relinquishment form for the animal."

(Author's note: An internet check on this Area Code 310 phone number indicated it is a landline in the Redondo Beach, CA, area.)

The two reports made on the Public Health form both indicate the dog was not euthanized by the shelter.

An email from an LAAS officer on December 21 responded to the inquiry by Public Health, as follows:

We faxed over a bite report on December 12 but later were advised the dog was removed on the same day of the bite to an unknown location.

I was able to clarify information for the bite victim on December 15 but was still trying to pin down the location of the dog.  (See attached amended bite report.)

I was able to confirm today that the dog was taken to Humboldt county but apparently escaped the home. It was taken to and subsequently impounded by Humboldt County Animal Shelter on December 18.

I spoke with the owner today at the address on report, he stated the animal was relinquished to the East Valley Shelter the day of the incident? If so, can I have a copy of the relinquish form and description of the animal and impound number.

On January 8, at 4:01 PM, the same Veterinarian wrote again to Public Health:

I found out that this dog was not impounded at East Valley but was taken to Humboldt County shelter and was euthanized there.  The dog was a Caucasian Shepherd, intact male. If you have further questions, you can contact the OIC [officer in charge]. The activity number was A20-017539, which has pertinent details.

"After conducting an initial inquiry, the Department has determined that it possesses records responsive to this request. However, this case is ongoing/open. Records will not be available until the case is closed."

It appears LAAS is attempting to obtain information on whether there is evidence the attack on the housekeeper was actually made by a Caucasian Shepherd (Ovcharka) -- weighing up to 190 pounds and considered one of the world's most aggressive breeds -- or by another dog.

With the dog already missing upon the arrival of first responders, including LAPD, that may never be known. But this still leaves the question of why the dog was so quickly removed and taken to Humboldt County? And, if the dog that went to Humboldt was not the dog that attacked, where is that dog now?

Also, why was it necessary for the alleged dog owner, Emil Lewis, to blatantly mislead City and County investigating officials about the impounding and euthanasia of the dog?

CityWatch will follow up on this case and the Public Records Act request we have on file with LAAS.

If anyone has information that would assist Los Angeles Animal Services with this investigation, the phone number provided is (818) 756-9323.