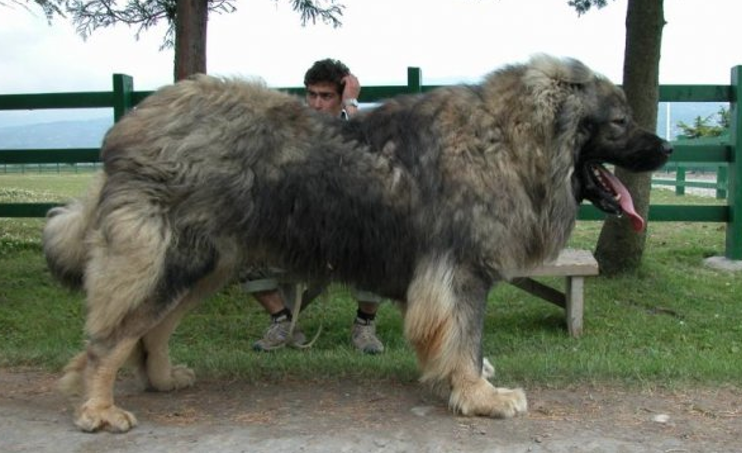 It is still not known if Brown -- an avid Pit Bull enthusiast, who advertised the sale of puppies he had bred as "CB Breeder" -- was present at the time. A neighborhood source initially speculated that the dog was a Pit Bull named Hades, owned by Brown.

New facts reveal the dog was named "Hades," but it was not a Pit Bull.

Emergency responders arrived within nine minutes after receiving the call, but the dog had already been removed. A man at the home identified himself as Emil Lewis and claimed he was the owner of the dog, which he said had been taken to Humboldt County.

Now there are additional questions about whether LA Animal Services' GM Brenda Barnette released the dog that attacked after it had been declared "Dangerous" by her own department.

Lewis identified the dog as a Caucasian Orvchaka, aka Caucasian Shepherd. (see photo above for reference) This is a very powerful and aggressive giant dog, a direct descendent of the original Molosser dogs, along with Pit Bulls and other fighting breeds. It is still used for dog fighting in Russia -- justified by insistence that the dogs must be "tested" to preserve the breed's instinct (bloodline) to kill wolves, bears and other animals while guarding sheep and other livestock.

Dog breeds Expert.com describes Caucasian Shepherds as weighing  up to 190 pounds and states, "Despite looking like an adorable cuddle monster -- this breed is not a family pet!" They are used to guard large estates and military encampments.

"He attacks by running at the intruder and knocking them to the floor before attacking them whilst they are down. This mountain dog instinctively knows where the most vulnerable part of his victim's body is and will aim for the throat. If needed, he will stand on his back legs to reach over six feet in height in order to attack someone's face. Puppies begin displaying their natural aggression at 3 weeks old."

The victim at Chris Brown's home was reportedly his housekeeper, who "while doing her duties was severely bitten on the right arm and left side of her face by a dog within the dwelling." She was transported to Northridge ER Hospital, according to the Los Angeles County Public Health Department, with "UNKNOWN SURGERY REPORTED."

Photos show the horrific dog-bite wounds which tore the flesh from her face and ripped muscles and tendons to the bone in her right arm.

DOG PICKED UP WITH MUZZLE

Because of the report that the dog was moved to Humboldt County, Los Angeles Animal Services contacted Humboldt County Sheriff's Animal Shelter and was advised that on December 18, an Animal Control Officer picked up a very large, unneutered male dog as a stray at 3828 Thomas Road, Miranda.

The officer noted that the dog was "aggressive, and found with a plastic muzzle attached to collar."

A Humboldt Animal Shelter employee wrote on Dec. 23, "He was OK when he arrived but after being placed in the kennel, he has been nothing but aggressive."

The shelter scanned the dog and found a microchip, which was traced to a veterinarian in Toluca Lake (a Valley neighborhood near Tarzana.) The veterinarian identified the dog as "Hades," approximately one-year-old male, unneutered, and registered to the Citrus Ridge Road, Tarzana, address where the attack occurred.

The report by a Humboldt County ACO supervisor continues: "I was able to reach the owner as provided by the vet."

"Quarantine for bite on 12th, very serious injuries. L.A. Animal Services officer said this is a high-profile case, as the other owner is a celebrity and the injuries were extensive, 80 stitches in face and arms."

On 12/22, LA Animal Services investigating officer at East Valley Animal Care Center,14409 Van Owen St., responded to Humboldt Animal Shelter, "Attached are the photos of the bite victim's injuries. They were provided to us by [her] husband."

"I have also included a copy of the bite report with information we were provided for the dog owner (name redacted). . . Please scan me a copy of your owner surrender form and I will arrange to have it signed. . ."

The dog owner signed the form (with attached photos of the dog), with the remarks by Humboldt Sheriff's Office Animal Shelter, "Dangerous/vicious dog from LA."

The owner wrote on the surrender form that the dog was not neutered or housebroken and is "unpredictable." (The kennel photo of the impounded dog is dark, but the breed is identifiable as a large Caucasian Shepherd. It shows the name "HADES," with the comment, "People Aggressive.")

In a later e-mail, the LAAS officer wrote, "The address where the dog was maintained and where (redacted name) claims partial residence is the one listed. . .Citrus Ridge Drive." [emph. added]

"(Redacted name) recently left the shelter and signed the owner surrender form, claiming ownership and responsibility for Hades. He has been the contact person from the beginning of our investigation and is listed as the dog owner on the LAPD police report." (Author's note--this name was revealed on other public-record documents as Emil Lewis.)

The e-mail continues that he informed LAAS that "the dog was given to him by a previous work associate.  However, he was unable to provide any written documentation to that effect."

ATTEMPT BY OWNER TO CONCEAL FACTS FROM OFFICIALS?

On January 8, 2021, an LAAS Veterinarian at the East Valley shelter wrote to LA County Public Health Department, "I spoke with the owner today at the address on report, he stated the animal was relinquished to the East Valley Shelter the day of the incident?"

On January 8, at 4:01 p.m., the same Veterinarian wrote again to Public Health, "According to the communication by the LAAS veterinarian, I found out that this dog was not impounded at East Valley but was taken to Humboldt County shelter and was euthanized there."

A dog cannot be declared "dangerous" in the City of Los Angeles unless a hearing has been held (SEC. 53.34.4.  DANGEROUS ANIMAL – PROCEDURES.):

(b)   Dangerous Animal – Declared.  The Department, after a hearing, may declare any dog or other animal to be a dangerous animal whenever it has bitten, attacked or caused injury to any human being or other animal.

But the General Manager has to agree to the "dangerous" designation by the hearing officer, based upon the issues and varying factors involved. It is the GM who actually issues the decision.

If there is an appeal, the General Manager also has the discretion to allow a dangerous dog to be moved and maintained outside of the City. (In other words, in another jurisdiction -- where it may injure someone else.) However, the General Manager also has the option to order the dog euthanized, if there is reason to believe it may repeat its dangerous behavior. (In this case, according to the veterinary records, the dog was only about one year old and had already attacked.)

Barnette, who wants her stats to show Los Angeles as a "No Kill" city, often unwisely  agrees to release a declared dangerous dog to a location outside the city of Los Angeles or to a "rescue."

However, she is obligated to ensure that the address where the animal will be kept is reported and that the animal is moved immediately to only that location.

Although we don't know how this dangerous dog got to Chris Brown's home, it was not outside the City's jurisdiction.

HOW DID TWO ‘CO-OWNERS’ GET THIS DANGEROUS DOG?

It appears Emil Lewis and perhaps the "celebrity co-owner" he cited were aware this dog was previously declared “dangerous.” (The dog had a muzzle attached to its collar when impounded by Humboldt County.) The Tarzana address where Lewis claimed partial residency is within the Los Angeles city limits, but the dog apparently was not licensed.

If the dog was given to him by a former co-worker, why would a "celebrity" sign on to the ownership of a free dog? That designation is usually reserved for expensive show dogs or valuable dogs that are being, or planned to be, bred.

Why was the dog was so quickly removed from the city before officials arrived at the attack scene?

This is a powerful, expensive breed that is known to guard ferociously and is naturally aggressive with humans. Barnette is a former dog breeder and AKC legislative liaison. Since it was a young dog and she has been GM since 2010, she must have reviewed the background of the dog and its nature when it was declared “dangerous.”

Strangely, "Hades" was also released unaltered. Was the goal to merely have a powerful guard dog on the premises at Chris Brown's home or to use the dog for breeding purposes, producing puppies that sell for $1,500 to $3,500 each?

A BETRAYAL OF PUBLIC TRUST AND SAFETY

Why would Chris Brown, the father of two beautiful young children, even consider allowing  a dog with this background on his property?

And, if it is true that she released this powerful, known-dangerous dog, how can LA Animal Services' GM Barnette's poor judgment continue to be tolerated by Mayor Eric Garcetti after a long, repeated pattern of similar incidents?

If this were an attack on a celebrity, it would have made worldwide headlines. Will a thorough investigation be ordered? Will all involved be held accountable (including the City of LA) so this housekeeper is guaranteed quality future care?

Or will the incident be buried because this victim's life and suffering do not matter and could make voters or fans uncomfortable?

Sign up for CityWatcher newsletters for more on this and similar articles.