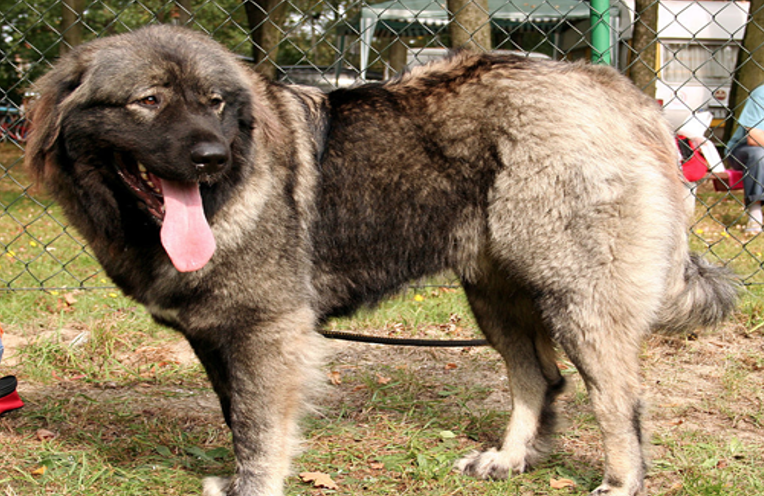 ANIMAL WATCH-Final-investigation documents obtained from Los Angeles Animal Services reveal gruesome photos and details of the vicious dog attack on a housekeeper at the Tarzana, CA, home of singer-rapper Chris Brown on December 12, 2020.

The large Caucasian Shepherd kept on the property ripped the woman’s face and arm as she bent over to empty a vacuum cleaner in the yard, where she was unaware the dog was loose.

The report also states there is no current license for the dog which attacked the housekeeper.

This appears to complete the investigation by the public agencies involved and was conducted by a Los Angeles animal control officer. Identities throughout the following were redacted by LAAS or the City Attorney to protect the privacy of parties interviewed. Some statements have been shortened or omitted to avoid repetition, but all are taken directly from the officer’s report.

The investigation by the Humboldt Sheriff’s Office and Los Angeles County Department of Public Health and more information about this dog and the incident  were provided in two previous articles:

The very large dog, reportedly a Caucasian Ovcharka Shepherd, named “Hades,” had been removed immediately from the 19602 Citrus Ridge Drive location after the attack and before the less-than ten-minute response by Los Angeles Fire Department and Police Department.

Information provided to LAPD identified the owner of the dog as a “Bodyguard of (redacted name.)”

The dog was allegedly driven to a nebulous location in Humboldt County by a security guard at the home. Neither Chris Brown nor the dog owner were home at the time, according to reports obtained through CA Public Records Act requests.

DETAILS OF THE INVESTIGATION

The investigating ACO stated that, after receiving this call, she and another officer responded to the Tarzana address and made contact with a security guard stationed in a personal vehicle at the end of the driveway, who identified himself and was cooperative.

“He called P/C (person contacted) on his cell phone and handed me the phone to speak with him,” the ACO’s report states. “P/C claimed responsibility for the dog involved in the incident but had no first-hand information about what happened. He claimed that the dog, named ‘Hades,’ had been removed from the property immediately following the incident to an unknown location. He stated that he would call around to some associates and ‘provide the location of where the dog is and the name of the person who had custody.’”

“P/C was unable to advise the exact breed of the dog other than he believed he was a Male ‘Russian breed dog’ that was one and one-half years old.  He was also unsure about the dog’s vaccination history but stated that he would try to get the paperwork together. He stated that he ‘has a room’ at the above address and ‘stays there a lot’ and otherwise travels with his employer (redacted name) on tours.”

The ACO writes, “Later in the day, he recontacted me and stated that Hades had been removed from the property by a security officer and reportedly given or taken to his ‘cousin’s farm in Humboldt.’ He provided a phone number. . .he later called back and provided some information for the ‘cousin in Humboldt.’ He stated the cousin’s name. However, he was unsure of how to spell the name. He also was unclear of the address but believed it was (redacted).”

“This address does not exist in Google maps,” the report states. (Redacted) provided two phone numbers. . .I called both but there was no answer at either and the outgoing messages for both numbers indicated the ‘voice mails had not been set up.’ I sent text messages to both numbers identifying myself and requesting a call back.”

The following has been shortened where it was heavily redacted, but is otherwise what was provided in a very thorough investigation by the LAAS Animal Control Officer: 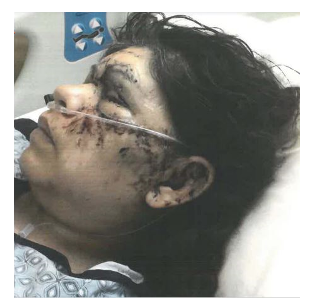 “I contacted Northridge Hospital Medical Center and spoke with a nurse who confirmed that clearance had been granted for one ACO to interview the victim; however upon my arrival I found she was asleep and did not want to disturb her due to her severe injuries and perceived heavy medication.

I was further advised that Spanish was the Victim’s first language and that she spoke very little English. I advised that I would return to interview victim another day.”

Later, after interviewing the security guard who had reportedly transported the dog, the ACO said she recontacted the Northridge Hospital and made contact with bite victim in her room.

She was lying in the hospital bed but was awake and alert. I advised her of the reason for my visit and she contacted her adult son on her cell phone to assist in communication with me.  He agreed to translate for me and the bite victim, explaining to her each of my questions and comments.

I observed the left side of victim’s face to have what appeared to be several lines of stitching running across her forehead, cheek, eyebrow and eyelid.  There was also evidence of either smaller injuries or dried blood in and around left ear lobe. 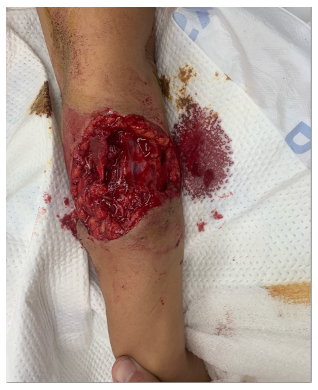 Entire left arm, from wrist to her upper arm, was wrapped in what appeared to be a cloth bandage. Neither [victim nor son] could advise how many stitches had  been taken for the injuries to her face.”

Victim did advise that she was scheduled to have surgery on her arm on this date to ‘take skin from another part of her body to put on her arm.’

Victim stated that she had been employed to clean the house twice a week on Saturday’s and Wednesday’s for approximately two weeks. She states that she arrives at the home at three o’clock and cleans for a few hours until she is finished. On this date her sister was also present and helping her clean. She later said she believed her sister was in the house and did not witness the attack.

The dogs are always put away when she arrives and enters through the back door. As usual, she went outside to empty the vacuum canister and was bent over, when the dog, described as brown and tall, approached her on the left side, attacking and biting her face.

She put her left arm up to shield her face, but the dog continued to bite, injuring her arm.  She indicated the dog did not bark or growl before it attacked her, so she was unaware that it was loose or nearby.

There was no one else who witnessed the attack but both (redacted) and the Security guard, whom Victim did not know by name, responded to her screams. But, based on Victim’s recollections, he was the only person in the house. She also recalls that he put the dog away after the attack.

I advised Victim and her son that I would show Victim a photograph of a dog and to let me know if she was able to recognize the dog. I presented the photograph of a dog provided by D/O (redacted name) to Victim and she immediately recoiled and began sobbing uncontrollably, apparently still traumatized by the attack.

After leaving the hospital,  I contacted Victim’s husband via a cell phone number obtained from Victim.  He stated he had photographs of Victim from the day of the attack and would forward them to me for the case.

He stated that (redacted name) also had the same photographs. He advised that he and his family had been in contact with (redacted name) and that he had accepted full responsibility for injuries, her treatments and recovery.  He initially surmised that [wife] had approximately 40 stitches in her face, however after reviewing and sending the photographs of her injuries and a photograph taken right after her first treatment, he guessed that she had over 80 stitches.

Having received no further information regarding Hades whereabouts in Humboldt, I called (redacted name) a security guard. He stated that on the day of the attack he was off duty.

He said he received a call from his boss, advising him of the incident and asking him to go get Hades and put him in his cage. He stated that he was called because he lives the closest, only five minutes away. When he arrived, Hades was already put away. He does not know who put the dog away.

At the house they talked about the incident and (redacted name) told him to ‘take it away’ and ‘I don’t want it anymore.’  He wanted to take the dog to his home but he lives in an apartment, so he called around until a friend agreed to take Hades, after being told about the incident. (Redacted name) then loaded Hades and drove him straight to an unknown address in a very remote area of Humboldt.”

The remote address was later identified as a marijuana farm in the report.

The violation that was being investigated at this point was listed as L.A. Municipal Code 53.33 violation, which reads:

No person, owning or having custody or control of any dog, other than a sentry dog, or any other animal known by such person to be vicious or dangerous, shall permit it to run at large, or permit it to run loose on or within the premises of such person in such a manner as to endanger the life or limb of any person lawfully entering such premises.

The LA Animal Services decision is that the attack at Chris Brown’s home was “a civil matter beyond this point. Dog and property owner have assumed all civil responsibility and resolving directly with bite victim.”

THE BREED OF THE DOG MATTERS, ACCORDING TO EXPERTS

All involved are fortunate that this was not a fatal attack. Caucasian Shepherds (in this case, first described as a Caucasian Ovcharka), historically served as guard dogs, bear hunting dogs and today they work as prison guard dogs in Russia. This indicates the power and genetic propensity of the dog.

Here are some warnings by EuroPuppy.com, which sells these dogs, in a brief article “Caucasian Shepherd—Family Pet or Ruthless Killer:”

“Unfortunately, many people think that the Caucasian Mountain dog is a family pet and we have to tell them that it’s not. . . .We only recommend Caucasian Mountain Dogs to people who are experienced dog owners and are able to display strong leadership so that the dog always knows who is in charge. This breed needs extensive socialization to teach him that not all strangers are enemies. The earlier this process is started the better.”

Hades was euthanized by Humboldt Sheriff’s Department Animal Control Unit at the request of his legal owner.

IS CHRIS BROWN AT FAULT?

Although he was not the registered owner of Hades, Chris Brown appears to have been aware the dog was being kept at his home.

It is hoped Chris Brown, who now has two small children, has taken this incident very personally and seriously. Possession of a dog can be a joy or -- as in this case -- a tragedy.

It is also hoped he agreed to assume on-going responsibility for care of this innocent victim for the rest of her life. These are not injuries or trauma from which she will ever totally recover -- physically or emotionally.