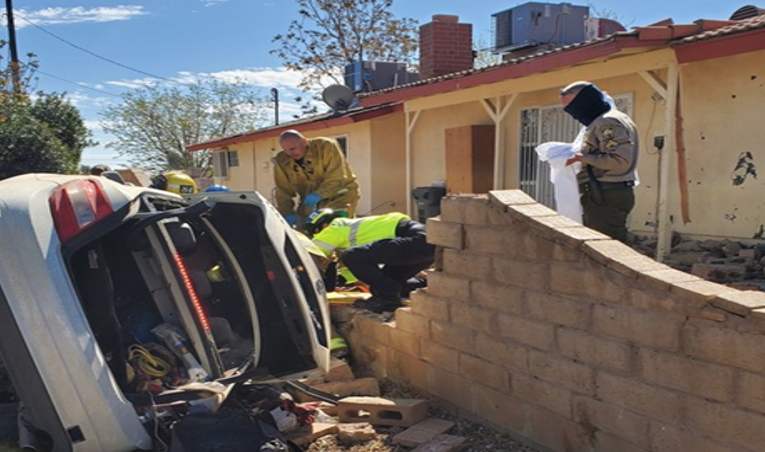 ANIMAL WATCH-Three Los Angeles County Animal Control Officers from the Public Safety Division, Major Case Unit, of the Department of Animal Care and Control were the first responders at a tragic auto crash on April 1, where the vehicle had burst into flames and was threatening a nearby home.

Sgt. Rachel Montez-Kemp, Cpl. Bethany Estes, and Cpl. Edward Callaway were returning from a court hearing in Santa Clarita when they saw the flames from the burning car at 41900 N. 60th Street West in Palmdale (Northern Los Angeles County.)

No Fire Department or Sheriff’s personnel were on scene at the time, so they stopped to provide immediate assistance.

Cpl. Callaway put out the flames with the fire extinguisher carried in the animal control truck and prevented the flames from spreading to the nearby home and surrounding vegetation.

A trapped occupant inside the car was later pronounced deceased.

Cpl. Callaway promptly shut off the water main to the threatened property because the water pipes damaged from the impact of the collision were spreading gasoline from the car fire.

When Los Angeles County Fire, Sheriff, and California Highway Patrol personnel arrived, Cpl. Callaway and Sgt. Montez-Kemp assisted in moving debris from around the vehicle so the occupant could be freed.

Cpl. Estes assisted with traffic control and assuring the safety of concerned neighbors and observers that gathered.

LA County first responders expressed gratitude to DACC personnel for taking action that prevented the spread of the fire and possible injuries to others.

“We did what anyone would do when someone is in distress, it doesn’t matter if it is an animal or a person,” said Sergeant Montez-Kemp, who has been with DACC for 21 years, and has been assigned for 16 of those years to the Major Case Unit (MCU).

Corporal Bethany Estes has been with LA County DACC since October 2014, and she has been with MCU since April 2019. Sgt. Montez-Kemp described her as “a dedicated officer who cares deeply for animals, treats people with respect and, when they are in need of assistance, she is always there to help."

Corporal Ed Callaway, who has been with DACC since 2007, remarked, “It was quite a great feeling to be able to assist when a car is on fire with a person trapped inside and you’re the only one in sight.”

“Our officers’ quick response demonstrated their ongoing commitment to public safety,” said Marcia Mayeda, Director of the Department of Animal Care and Control. “We are very proud of our officers’ dedication to ensuring a safe community for all residents.”