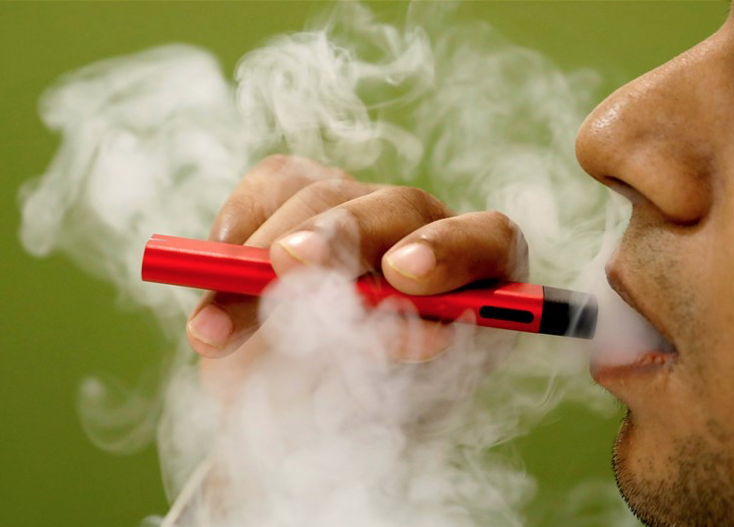 BCK FILE--If a proposal introduced by Councilmember Paul Koretz at Tuesday’s City Council meeting is passed, the sale of e-cigarettes and vaping products would be banned in Los Angeles until the products receive premarket authorization from the US Food and Drug Administration.

To date, no e-cigarette or vaping products have received premarket authorization or have been deemed safe by the FDA. In effect, this would place a ban on the sale of all devices.

Koretz’s proposal was referred to a council committee focused on health, which would vet the idea before deciding whether to send it to the full council for a vote. If passed, city lawyers would draft an ordinance for council approval.

The ban would be one of the most restrictive proposals in the country to date, following an outbreak of vaping-related lung illness across the country.

As of October 1, 080 cases of lung illness associated with vaping have been reported to the Centers for Disease Control (CDC) from 48 states and 1 U.S. territory. Last week, a 17-year old Bronx, New York teen was the youngest fatality of 23 vaping-related deaths this year.

Bans Throughout the Country

Last week, Los Angeles County passed a ban of flavored e-cigarettes and menthol cigarettes. The ban, which goes into effect at the end of October, would apply to the million residents who live in unincorporated areas of the county.

In addition, the Trump Administration has proposed a ban on flavored e-cigarettes. Ohio, Washington, and other states are considering adopting similar bans. Los Angeles City Attorney Mike Feuer has recommended a flavored tobacco ban, as well.

San Francisco was the first city to ban e-cigarettes earlier this year. JUUL Labs, Inc., headquartered in the city, announced last week that the company would withdraw its support of Proposition C, a San Francisco ballot measure to overturn the vaping ban. JUUL, which donated $19 million to the campaign, was the measure’s only financial backer. The company also ceased lobbying efforts and advertising, following a change in corporate leadership.

Massachusetts has instituted a temporary 4-month ban on e-cigarettes, while Michigan and New York State have banned flavored e-cigarette products. However, an appellate court ruling placed a hold on the New York ban that was announced last month by Governor Andrew Cuomo, amidst concern over rising youth usage and the outbreak of lung illnesses. An industry trade group, Vapor Technology Association, is arguing for a preliminary injunction on the ban and the case is scheduled before the Supreme Court in Albany on October 18.

JUUL and Rise in Youth Vaping Use

The explosive surge in e-cigarette usage and the meteoric rise in JUUL, the market leader in the e-cigarette industry, is in large part due to epidemic youth use. JUUL Labs in particular has benefited from popularity among teens and preteens because of social media marketing, as well as its easy-to-hide design and flavors.

Unlike conventional cigarettes, JUUL uses a proprietary vaporization process with benzoic acid, which renders the nicotine smooth and less harsh than smoking. As a result, adolescents and people new to tobacco are able to use greater amounts of nicotine.

Former FDA commissioner Scott Gottlieb has referred to the rising use of e-cigarettes in youth as epidemic. According to the CDC, 1 in 4 high school students reported vaping in the previous 30 days, with fruit, mint, and menthol flavors most commonly used. 66% of teens surveyed believed e-cigarettes did not contain nicotine, while some e-cigarette pods may contain as much nicotine as a pack of combustible cigarettes.

In June, the House subcommittee on Economic and Consumer Policy announced a probe into whether JUUL Labs, Inc. deliberately targeted teens and youth. The committee has threatened to subpoena JUUL if the company does not turn over its marketing documents.

In September, the FDA issued a warning to JUUL Labs for “marketing unauthorized modified risk tobacco products by engaging in labeling, advertising, and/or other activities directed to consumers, including a presentation given to youth at a school.” The agency also sent a letter to the company, requesting more information about several issues raised at a Congressional hearing about JUUL’s marketing outreach and marketing practices.

Opposition to bans of vaping devices often centers on the use of e-cigarettes as a smoking cessation aid. JUUL Labs has changed its marketing to feature real-life smokers who use JUUL devices to quit smoking. However, in September, the FDA sent the company a warning letter, stating JUUL Labs had violated federal regulations when advertising its products as a less harmful alternative to conventional cigarettes. The company had not received required federal approval to market its products as a safer alternative.

E-cigarettes are not necessarily an effective smoking cessation aid, according to Michael Blaha, M.D., M.P.H. The director of clinical research at the Johns Hopkins Ciccarone Center for Prevention of Heart Disease says vaping is still bad for your health, with many unknowns about longterm effects. E-cigarettes contain highly addictive nicotine, just like conventional cigarettes, which raises blood pressure and spikes adrenaline, increasing the likelihood of heart attack. Blaha also notes the devices have not received approval as a smoking cessation device by the FDA and surveys show that most people who attempt to use e-cigarettes to stop smoking end up using both e-cigarettes and traditional cigarettes.

The FDA has been responsible for regulating e-cigarettes since 2016 and in August of that year, the agency made it illegal to sell e-cigarettes and ENDS products (e-cigarettes, vapes, e-cigars, e-hookahs, e-pipes, and e-liquids) to minors under 18.

In July of this year, the U.S. District Court in Maryland ordered applications for e-cigarettes and products on the market as of August 2016 must submit applications for premarket authorization to the FDA by May 12, 2020 or during the one-year review period. What this means is that all e-cigarette products that are “new” must be undergo a thorough scientific review by the FDA. If the products do not receive authorization, they will not remain on the market.

The next year may be a turning point for e-cigarettes. JUUL Labs has undergone a change in CEO’s and the company has ceased TV, print, and digital advertising, as well as lobbying efforts. JUUL and other e-cigarette companies face numerous lawsuits across the country, alleging illegal marketing to youth, as well as that the companies’ products caused nicotine addiction and injuries.

While the vaping-related lung illness cases appear to be connected with THC, federal officials have told the public to avoid using e-cigarettes until the cause of the respiratory conditions is understood.

Vaping Industry: Wild West
The vaping industry has been a wild west without many restrictions. Too much is unknown about the long-term effects of vaping, especially among adolescents and teens. Companies have not been mandated to disclose ingredients in their products. Until the pending premarket authorization guidelines take effect, there needs to be oversight in place to curb the explosive rise in teen nicotine and e-cigarette use, as well as the unknown cause of vaping-related illness and deaths.