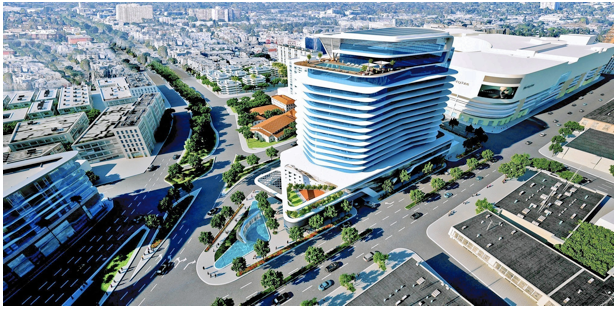 PLATKIN ON PLANNING--Mega-developer Rick Caruso’s proposed 21-story luxury high-rise apartment complex at the intersection of LaCienega and Burton Way is a city planning accident waiting to happen. It also similar to the three nearby Miracle Mile museum projects that I criticized as being oblivious to their surroundings in last week’s CityWatch column.  In those cases, I charged that these bizarre museum projects were just plopped into place. They are totally disconnected from the Miracle Mile, and they do nothing to address that historic corridor’s deficient public services and infrastructure and lackluster appearance.

Market-based land use decisions-- Likewise, the 333 S. LaCienega project, which has recently completed its Draft Environmental Impact Report and is now shopping for support among community groups, has the same weaknesses. To begin, at this location -- the former Loehman’s and DWP water treatment site -- this project totally conflicts with adopted zoning and planning ordinances. To be built, the City Council must legally alter the underlying parcel’s zoning and General Plan designation. Until this happens, as designed, this project is dead in the water because it could only be built according to code.

While building to code would totally please surrounding neighborhoods, the developer, Rick Caruso, complains that a smaller building would generate much less profit than a luxury high-rise. He is undoubtedly correct, but reduced future profits are hardly legal grounds to justify spot-zoning and spot-planning. If elected officials cast aside every land use law and adopted General Plan element when investors thought they could make a fatter profit with a more permissive zone and General Plan designation, future accidents would no longer be waiting to happen. They would be happening right now.

Racing against the lock to get approvals-- Sitting in the wings is the Neighborhood Integrity Initiative. It comes up for a vote in March 2017. If approved, it would stop spot-zoning and spot-planning for good, and that includes many future accidents, like this one. This is why Caruso Affiliated must keep one eye on the calendar. For this project to go forth, it must obtain all of its approvals before the Initiative forces City Hall to take planning seriously. At the same time, Caruso Affiliated must also keep an eye on anxious neighbors and community organizations since many of them see no need for a luxury high-rise at this highly congested location.

The neighbors not only have full rights to appeal and litigate this project, but also know that this area already has three regional traffic generators: the Beverly Center, Cedars-Sinai Hospital, and the Beverly Connection. They have also realized that City Hall made a colossal error by incrementally turning this area into a regional center through many separate land use actions. Furthermore, with or without Caruso Affiliated’s 333 S. LaCienega high-rise, this section of Los Angels is becoming much busier. The nearby Beverly Connection has been remodeled, while Cedars-Sinai is in a perpetual expansion mode, and the Taubman Corporation’s Beverly Center is undergoing a massive, $500 million renovation.

Despite so much private investment pouring into this area, it does not have nor will it have mass transit. While it has several METRO bus lines, few people who live, shop, or depend on medical care at this location rely on transit. As for the Caruso project, its future tenants only need to pick up the phone and a luxury car and chauffeur will be waiting for them.

While Wilshire Boulevard will eventually have a Purple Line subway station one mile to the south, no one contends that it will reduce traffic congestion in the Beverly Center area. San Vicente, Burton Way, Third Street, and LaCienega will still be a mess when the subway opens for business in 2023, and then for the foreseeable future.

The other disturbing issue is that that if/when the City Council adopts spot-zoning and spot-planning ordinances for this site, the resulting high-rise will be more than twice the height of other nearby buildings, such as Cedars’ new Saperstein wing.   Furthermore, its streamlined moderne architectural design is totally at odds with other buildings in this area, except for another Caruso Affiliated luxury project one block away.

Area deficiencies-- But what about this area’s major deficits, other than horrendous traffic congestion? Like most of LA, they are legion, and this building’s proposed Community Benefits deal only scrapes the surface.

To begin, this entire area needs to have its conspicuous and dangerous overhead wires undergrounded. On nearby Third Street, filled with trendy stores and restaurants, they loom over both sides of the streets.   This commercial center, like most of Los Angeles, also has broken sidewalks and lacks coherent street furniture, such as light standards, benches, signage, and trash cans.

San Vicente Boulevard is even worse. It is nearly impossible to cross it on foot, and its motley selection of trees includes some that are barely alive. And, since LA welcomes billboards, unlike neighboring Beverly Hills, they are a true blight in this corridor.

At its best, the enormous private investment flowing into 333 S. LaCienega will not fix this area’s many deficits. At its worst, it will exacerbate traffic congestion, if that is possible, and its spot zoning and spot-planning – courtesy of the LA City Council -- sets a dangerous precedent.

Despite disclaimers, it is only time until they are matched with follow-up City Council actions to grant similar requests from other real estate speculators. When this happens, landowners will reap enormous windfalls in increased property values, but none of this instant wealth will trickle down to the local community.

When this finally happens, though, today’s elected officials will have moved on to cushy consulting jobs, or perhaps they will be winning horseshoe tournaments in their desert hideaways.

What to do? I think one of my neighbors hit the nail on the head in her testimony to a local Neighborhood Council meeting.

She argued that community groups should not bless such projects in exchange for negotiations that produce supposed community benefits.

This is because spot-zoning and sweetheart deals are a slippery slope. They are designed to divide local communities by peeling away shortsighted factions. Their side deals then end up “shredding LA’s zoning code” and destroying entire neighborhoods.

Finally, even when developers have tremendous pull that allows them to usually get what they want, our response should be, “Build to code or don’t build at all.”

(Dick Platkin is a veteran city planner. He reports on local planning issues for CityWatch, and he welcomes comments and questions at [email protected].)