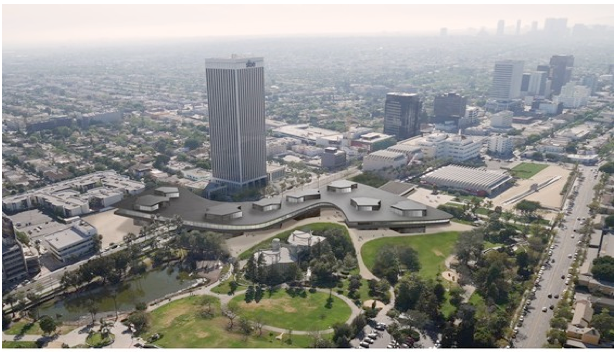 PLATKIN ON PLANNING-If you want to dive into critical discussions about the Los Angeles County Museum of Art’s (LACMA’s) makeover, designed by Peter Zumthor, the world is your oyster. Just Google it, and for hours you can immerse yourself in renderings, panel discussions, and well-written articles, many by LA Times architecture critic, Christopher Hawthorne.

But most of what you unearth will miss the big picture, the context of LACMA’s costly project on Wilshire Boulevard, where two other nearby museum projects have already been abruptly plopped into place. Like Zumthor’s edgy design, they, too, are totally disconnected from the surrounding mid-Wilshire area.

This section of Wilshire is called the Miracle Mile and it extends from Highland Avenue on the east to San Vicente Boulevard on the west. It began as LA’s premier shopping destination, and it still has some notable gems. But, with or without Zumthors’s inkblot, this area’s many rough edges require far-reaching up-grades.

The question is how the future of this charming, centrally located region of Los Angeles will evolve over the next several decades, especially when the Purple Line Subway Extension opens in 2023. By the time it is completed, this transit project will have cost over $3 billion, a tidy investment of local and Federal money.

The Miracle Mile’s amenities include Page Park (also called Hancock Park), the LaBrea Tar Pits, and the adjacent complex of museums near Wilshire and Fairfax. Together they have reversed some of the corridor’s economic decline after the Beverly Center and Grove shopping centers forced its old department stores to meet their maker.

Unlike the transit improvements, which are publicly financed, the museums are dependent on private philanthropy; the bulk of it coming from a small coterie of extremely well off patrons, such as Eli Broad. More specifically, LACMA’s project will cost over $650 million, and the adjacent Academy of Motion Picture Arts and Science museum and major event center will cost at least $300 million. Across the street, the renovation of the Peterson museum cost $125 million.

Given cost overruns and inflation, we can assume that the final museum price tags will easily surpass $1 billion in private donations from LA’s one-percenters.

Corridor’s shortcomings: Considering that over $4 billion in public and private investments is flowing into the Miracle Mile corridor, it is truly amazing that so many obvious shortcomings in appearance and public services persist. Sitting in plain view, they remain unexamined and unaddressed by City Hall, METRO, and the big-givers impatient for their names to be chiseled in marble on museum entranceways.

Like most of Los Angeles, this blight is pervasive, and it is inexcusable that $4 billion in public and quasi-public projects have ignored the following:

Why is context so ignored? How can we explain LACMA’s failure to consider the Miracle Mile’s context in its expansion plans? Why have the other two major museums in this area also been so resistant to local design guidelines and so unconcerned about the extraordinary lack of sufficient services, infrastructure, and planning for this corridor?

My working explanation is that LA’s movers and shakers, who are the guiding light and deep-pocketed funders of these museum projects, are quite unaware of the city they live in. Cloistered in protected estates and penthouses, their lives consist of private services, private infrastructure, and tinted windows blocking out both sunlight and the urban blight of most LA neighborhoods. Instead, they only peak out of limo windows to view iconic buildings, such as the Getty Museum, Disney Concert Hall, and now LACMA, all designed by celebrity architects appreciative of accolades and handsome commissions.

In their wake, elected officials and City staff have absorbed this blinkered view of Los Angeles, and it is our task to peel the tinting off the windows so they can see and attend to the real Los Angeles.

(Dick Platkin lives in the Fairfax area, several blocks from LACMA and the Purple Line Extension. A veteran city planner, he reports on local planning issues for CityWatchLA, and he welcomes comments and questions at rhplatkin@gmail.com.) Prepped for CityWatch by Linda Abrams.