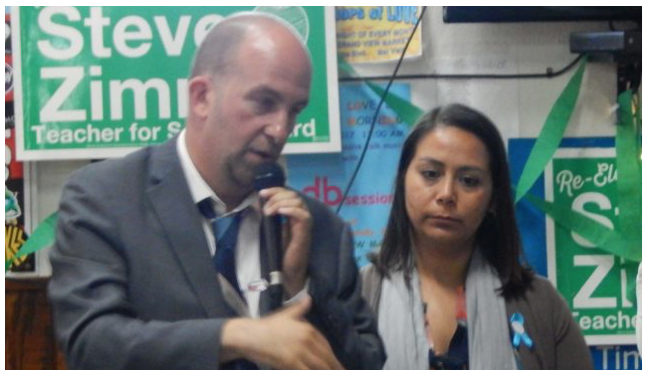 EDUCATION POLITICS-When New York billionaire Michael Bloomberg spent half a million dollars to kick Steve Zimmer off the LA School Board, Zimmer (photo above) picked up the phone. In a departure from his self-described “conflict averse” nature, he wanted to pitch his version of collaborative school reform to the “education mayor.”

The staffer screening the call told Zimmer that Bloomberg didn’t know who he was.

Sure he did. He just donated half a million dollars to beat me, Zimmer explained.

But the aide insisted.

Bloomberg, along with other billionaires, were disrupting public education. Anybody who wasn’t with them was facelessly labeled as the status quo.

That was four years ago. With the help of the teachers’ union and a small army of grassroots activists, the massive infusions of cash were understood as attacks on their community. Zimmer prevailed.

Last month, in a redo of the most expensive school board race in history, Zimmer lost to a candidate backed by the billionaire boys club, Nick Melvoin.

What changed in four years? That's an important question to anyone contending with the deep pocketed privatizers in future elections.

Los Angeles is the biggest school district in the country that still elects its school board. That makes it harder to control by so-called education reformers, who seek to dismantle the public school system in order to create a marketplace of school choices, shifting billions of dollars in public moneys into private hands. Investment in elections here can pay huge dividends.

But the lessons to learn from Zimmer's defeat and the sweeping takeover of the LAUSD school board by charter school backers can apply anywhere.

Los Angeles has been described, not so much as a city, but a collection of communities, each with its own unique identity. Its schools are sprawled across 700 square miles: urban pockets of extreme poverty, areas of extreme wealth, and a lot in between.

Of the seven school board seats, none encompasses as diverse a range of communities as the seat held by Zimmer for the last eight years, Board District 4.

If all politics are local, then maybe public schools are micro-climates, being such an integral part of a family’s daily existence.

Last election cycle, the Westside suburbs are where Zimmer won. It’s where the highest propensity of voters live, and it’s where a gaggle of activists have helped instill parent confidence in public schools. This time, charter backers set up a structure to organize parents, matching the union’s greatest strength -- pavement pounding activists.

Also since the last election, botched interventions at some schools created coalitions of constituents that had nothing in common other than frustrations with Zimmer, who has never really been comfortable on the Westside.

Those frustrations extended to a school district bureaucracy perceived as out of touch, geographically and philosophically. It wasn’t always that way, and several retired LAUSD leaders are well-respected members of Westside communities. On the rare occasions that Westsiders encounter the district “suits” now, they are seen as more of an obstruction than a support. Some school communities have pursued methods of autonomy, making the case that schools are better off on their own.

No school makes a stronger case for that than Palisades Charter High, a converted LAUSD school in an affluent neighborhood overlooking the Pacific Ocean. One of its former board members, Allison Holdorff Polhill, made a strong showing in the primary election and threw her support behind Melvoin. Her constituents followed. Public education activists will attribute this to them both being backed by the charter lobby, but their Westside connection is what coalesced their constituencies.

Melvoin grew up on the Westside.

California ranks near last in per pupil funding, thanks to a decades old property tax cap. That’s a staggering drop from the Golden Age of public education during which the Golden State was near the top -- the time when a lot of current LAUSD parents attended public schools themselves.

What happened since then to let California schools sink so low? Nick Melvoin’s whole campaign was a part-fictional story of how Steve Zimmer was to blame.

Zimmer was constantly on the defensive. He fessed up to taking money from wealthier parts of the district to fund poorer parts. As a constituent who closely followed Zimmer’s board tenure, I had never heard him explain it in zero sum terms. To the contrary, he usually told a story of “all for one and one for all.” Now, he was almost asking voters to sacrifice their own kids’ education for others.

Melvoin tapped into frustration with austerity plans held over from the recession -- implemented by his own supporters -- while at the same time slamming Zimmer for fiscal mismanagement.

Melvoin’s promise essentially amounted to making Los Angeles schools great again. But the assertion that Melvoin was Trump-lite mostly fell on deaf ears. LA’s Westside was full of proud Democrats and Melvoin was endorsed by Obama’s Secretary of Education, Arne Duncan. Lost on most voters were subtleties like Duncan’s neoliberal education reforms being so unpopular that Congressional Democrats agreed to strip the Education Secretary’s post of most of its power.

“Indivisible” groups did not clarify the situation either. Two Westside affiliates of the national movement to call out Democrats for being too moderate refused to allow posts about the school board election for fear of being divisive.

Zimmer’s campaign was run by a longtime teachers’ union insider. To voters, their explanation that “labor peace” was essential to moving schools forward seemed beside the point. This disconnect culminated in his election night event, which was like a labor rally replete with union chants. In the land of Snapchat, Google, and Hulu bikes, they were speaking a foreign language.

There were other moves that dumbfounded voters. UTLA mailed a letter telling voters the union would check up on whether they had voted. This reinforced Melvoin’s point that the union was pushing parents around. The LA Times reported the backlash from a similar “vote shaming” letter which no one claimed credit for sending.

I asked UTLA president Alex Caputo Pearl how the union tailored its efforts for Westside voters. As a union ally, I cringed when he told me UTLA was proud of its work with parents and community organizations, and it would continue.

He said Zimmer ran a great campaign, but was outspent.

“If money is the mother’s milk of politics, absentee ballots are the meat and potatoes,” former LAUSD school board member, David Tokofsky, told me. “Maybe they’re vegetarian.”

He was referring to the fact that no mailers were timed with absentee ballots, and Zimmer’s campaign offices opened a mere five weeks before the election. That barely left time to contact voters before they received absentee ballots, which was how over 60% of the votes were cast.

Zimmer might have lacked comparable resources to share his story, but it seems his version for voters was never crafted at all. He mostly played defense. In debates, he explained how supportive he was of charters and choice, clouding the narrative of being a public school champion.

“The progressive case for public education was never made,” Joshua Leibner, National Board Certified Teacher, told me.

Rather, his campaign was by and for LAUSD’s old guard.

Although Zimmer conceded that Melvoin’s campaign was focused, he believes money prevailed.

“The most important thing that money did was to enable them to win an election without having to debate any of the issues,” he told me on the phone.

It might be more accurate to say that their money allowed them to choose the issues to be debated.

That seemed to resonate, but it obscured an agenda Melvoin’s backers have spent years and millions of dollars advancing, one that Trump's education secretary Betsy DeVos shares: the school choice marketplace not just as the means, but as the goal. It’s hard to tell if voters realize the privatizing camel’s nose is inside the tent.

Melvoin said that’s not the case.

“I made it very clear that I was not a shill for the charter movement,” he told me a week after the election. “I think the reason the philanthropists have been investing in charters is that they see it as a more efficient route to reform.”

“They knew that if it was really about charter schools, they would lose,” Zimmer said. “They don’t have a mandate.”

They may not have a mandate for charters, but a fourteen point margin of defeat of an incumbent school board president is likely to be interpreted as a mandate for something.

As one LAUSD school administrator told me, “This is an absolute rebuke of LAUSD leadership. Of the board, of the district, of the union. Voters want better schools.”

Melvoin’s deep-pocketed backers are sure to insist that that means charters. But jumping to that conclusion ignores the complexities that voters grappled with in this election, and the fact that they were not offered a clear alternative.

(Karen Wolfe is a public school parent, the Executive Director of PS Connect and an occasional contributor to CityWatch.) Edited for CityWatch by Linda Abrams.