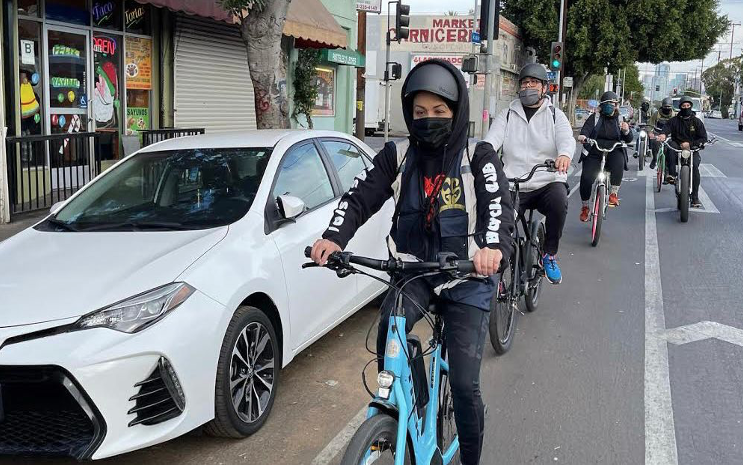 EASTSIDER -  I’ve written about this project a number of times since since it took off (without any real community input) in 2019.

As I wrote back in 2019, none other than Jose Huizar was really responsible for the back room deal to monetize Eagle Rock and Colorado Blvd via a ‘road diet’ massacre.

Blame this exercise on God’s Gift to the Eastside (until the Fall) Jose Huizar. Yes him. People forget two basic facts about Huizar. First, he was all in for the Complete Streets City Planning model, which makes environmentalists, pedestrians, and bicycle advocates all a twitter, as we try to get those nasty cars off the road. How and whether that actually works is a topic for another day.

Second, you must remember that Huizar was appointed to the MTA (now Metro) Board of Directors in 2009, where he remained until 2013. Note the dates. Surprise: The study which led to Saturday’s meeting was a 2013 Countywide Bus Rapid Transit Study. It has his imprint all over it, shades of the City’s wonderful and ever so successful “Road Diet.”

Flash forward to 2017 when Metro (sans Huizar) unveiled its Technical Study Report, and to this year when we were gifted with both a complete Alternative Analysis and a vote on the Metro Board to move on with an Environmental Impact Report.

At a second meeting held at Occidental College on August 7th, a couple of new elements came to light.  First, it turned out that the Eagle Rock Chamber of Commerce was never consulted and did not in fact support the Colorado Blvd option instead of using the 134 Freeway.

“Readers of my last post may remember a picture of the short-lived banner from the Eagle Rock Chamber of Commerce, opposing the NOHO BRT project. Yet in Metro’s earlier documents ( 2016) running up to the Staff recommendation to eliminate the 134 Freeway route, that recommendation was partially based on a letter allegedly sent by the Chamber of Commerce supporting the project.

Turns out the letter was a fraud. Literally. In a handout dated August 6th from Michael Nogueira, President of the Eagle Rock Chamber, he stated:

And this quote is just the opening paragraph of a two page single spaced document which is damming in its specificity. If you would like a copy, I’m sure that if you contact the Chamber at www.eaglerockchamberofcommerce.com they would be willing to send you a copy of the full letter ”

It also appeared that two of Huizar’s buddies were taken aback enough by the flack to buy time and regroup:

“The big news of the meeting were the comments of the two most directly affected Metro Board members - Hilda Solis (also on the LA County Board of Supervisors), and Ara Najarian, who is also the current Mayor of the City of Glendale as well as a multi generational Occidental College alum.

Board member Solis stated that she was “concerned about input before decisions are made”, and further that “no decision has been made”.  Board member Najarian stated that “No one on the Metro Board has voted for one project or another”.

Cut to June 2021, when the project suddenly re-emerged on steroids.  As the lead to my story called it:

“EASTSIDER - A few weeks ago, a very reliable source in Eagle Rock told me that Kevin de León had talked to a key Eagle Rock resident, informing him that the fix was in -- NoHo to Pasadena was going down Colorado Blvd and “get over it.”

Someplace along the line it became clear that there is a small coalition of players who are ramming the ‘road diet’ version of the Colorado Blvd piece of the Glendale to Pasadena BRT route. Politically, it’s the combination of Jose Huizar (until he was busted), Hilda Solis from the County Board of Supervisors, and now the Councilmember for CD 14 (and Candidate for Mayor) Kevin De Leon. The Mayor of Glendale was also involved until he ceased to be Mayor.

To be direct, I don’t think any of them give a rats ass about the local businesses that are going to get wiped out during the construction process.  I guess they are more interested in the land use opportunities for developers than actual businesses which have been around for years, providing the backbone of Eagle Rock.

The ex Mayor of Glendale got what he wanted; he owns property in the construction area, and senses opportunity. I guess Hilda Solis got what she wanted. According to folks in the know she left Congress so she could come to LA County, become a Supervisor, and retire after she termed out. Nice pensions.  Her machinations at the Metro Board would be consistent with this analysis.

Two other groups also personally benefit by this plan. TERA,The Eagle Rock Association, has a leader who is a rabid bicycle advocate, and has choreographed the bike movement ‘take no hostages’ road diet vision to get rid of all those nasty cars that people use to get around in.   Then there is another ‘leader’ on the Eagle Rock Neighborhood Council who personally gained an architectural contract with Metro concerning the BRT, and has also shut down any gainsayers.

You know, to get to work and and even buy things at the local businesses.

Personally, I find them loud, inflexible, and nasty.  Nasty like attacking anyone who does not agree with them. And I have to wonder exactly how many of the bicycle crowd actually live in Eagle Rock, as opposed to all of the residents and others who use their cars to shop with the local businesses.

As far as I can remember. I am unaware of Metro ever delivering a project on time and on budget.  They are just hot to spend the sales tax money to justify their existence. There is no reason to believe that this project will play out any better than the rest of their plans.

Even though Metro’s Board is largely indifferent to the plight of anyone other than their own personal difficulties, please hear this plea from some of those whose lives will be wrecked by your callous action:

“Can you please do a story about Eagle Rock and N.E. LA's battle against an unnecessary Road Diet on Colorado Blvd?
We have had a small group of Road Diet Activists bullying ANY Eagle Rock residents and business owners for the past 2 years who speak out against the Road Diet at meetings or businesses, They are continually demanding a single lane Road Diet from Metro on Colorado Blvd, in our shopping district. See Google Drive Link below.

There are 30 restaurants, and 30 other businesses on Colorado Blvd. very stressed by this Metro BRT Noho-Pasadena plan to accommodate bike activists and take out lanes and take out most of the parking. Metro adopted their "Refined F1" design to mollify the Road Diet activists demanding this redesign for 2 years.  It is one of 2 harmful designs being finalized in the next month by Metro for Colorado Blvd. in Eagle Rock.

There is no traffic congestion problem to solve here in Eagle Rock currently, buses travel at 30 mph all day, and there is currently a bike lane although very few bicyclists use it.. We know the majority of Eagle Rock residents and businesses want the BRT bus to drive in the current mixed flow lanes (quickly like buses do now).

We - The Eagle Rock Chamber of Commerce, our residents group of 1600 petition signers, and 45 restaurants and stores on Colorado have been asking Councilman de Leon's office for a meeting for the business owners to voice their concerns for 2 months. Nothing yet. No response. I can provide you the email chain.

If the Road Diet activists win in their demands that Metro redesign Colorado Blvd to 1-lane, and take out parking and put in BRT only lanes and protected bike lanes, our shopping district will die off. The final design will be approved by the Metro Board Dec. 2, we know it will kill this 100 year old, Route 66 shopping district of 30 restaurants, 60 shops and businesses that cater to kids and families with art lessons, music, dance, gymnastics, karate, etc. It is a bustling street after school, dinner time, and weekends, but all of the families and the businesses are concerned about losing parking.

The bullying continues every day. Below is a Google Drive link with hundreds of images of Tweets of bike activists bullying ANYONE who speaks out against their Road Diet. There have been death threats from bike activists from across California, vandalism, boycott threats, slander, accusations of racism, elitism, anti-transit, anti-poor people, anti-environmentalism.... for over 2 years!  One restaurant named "Bite Me" in Eagle Rock was driven out of business because of it. All the businesses on Colorado Blvd. feel sorry for her the way she was bullied, social media attacked, slandered, and had her doors and windows of her restaurant vandalized. She was fearful and closed the restaurant (pre-pandemic).

(Tony Butka is an Eastside community activist, who has served on a neighborhood council, has a background in government and is a contributor to CityWatch )