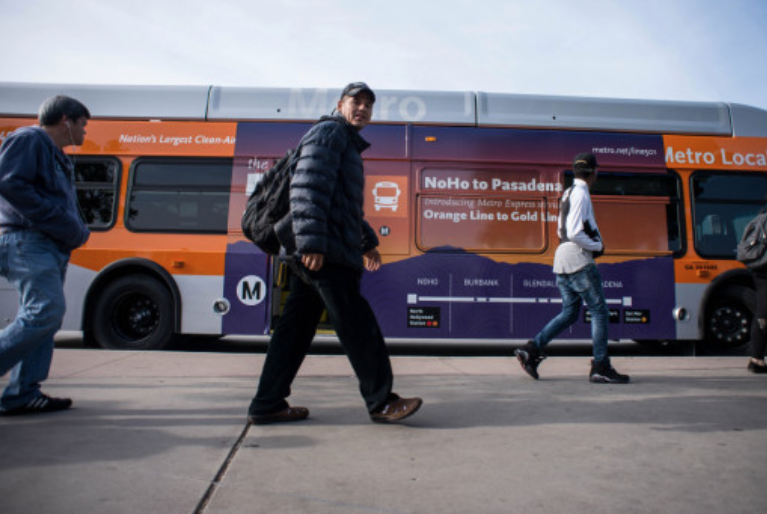 EASTSIDER--Clearly, Metro’s plan for a NoHo to Pasadena BRT project has torn the community of Eagle Rock apart.  So where do we go from here?

It’s been almost a month since the highly contentious ‘scoping meeting’ held at Eagle Rock Plaza. You know, the one where 300 people showed up at a space only permitted for 100. The followup August 7th meeting, at Occidental College was  clearly a 100% revised program to make sure another Eagle Rock Plaza could not happen.

Originally the follow-up meeting was going to be held at Occidental College in a large auditorium which holds about 700 people.  However, at some point in time ‘someone’ made a decision to change the venue to a smaller, open-space structure called  the Samuelson Alumni Center.  Further, the nature of the meeting was also changed into being a show and tell  ‘open house’ with no public comment or scoping at all.

It turns out that this decision was made by Supervisor Hilda Solis, who stated at the August 7th meeting (1) the Eagle Rock Plaza meeting was “too disruptive and divisive”, so the decision was made to change the venue to the smaller space, and (2) the entire format was changed so none of the natives could speak their displeasure on the record. Whether or not she personally made the decision or it was as a result of the last Metro Board meeting is unclear.

Instead, there were a ton of Metro employees, including about 1/2 a platoon of Metro Police, and a large number of Metro employees standing around a bunch of blow-up graphics of various subjects regarding the project.  That, along with speeches by two Metro Board members and General Manager was the extent of the event.

Well, this meetup was not confrontational.  It couldn’t be. It was deliberately set up so that people could vent (most of the attendees at this one were against the project), with no real outcome in terms of the ‘scoping’ process or input into the Draft EIR.  Remember, this was supposed to be about the process of determining a tentative Environmental Impact Report.

About the Chamber of Commerce

Readers of my last post may remember a picture of the short-lived banner from the Eagle Rock Chamber of Commerce, opposing the NOHO BRT project.  Yet in Metro’s earlier documents ( 2016) running up to the Staff recommendation to eliminate the 134 Freeway route, that recommendation was partially based on a letter allegedly sent by the Chamber of Commerce supporting the project.

Turns out the letter was a fraud.  Literally.  In a handout dated August 6th from Michael Nogueira, President of the Eagle Rock Chamber, he stated:

And this quote is just the opening paragraph of a two page single spaced document which is damming in its specificity.  If you would like a copy, I’m sure that if you contact the Chamber at www.eaglerockchamberofcommerce.com they would be willing to send you a copy of the full letter

For those of us who have had close acquaintance with our favorite unindicted Councilmember Huizar in CD14, there is little doubt that everything alleged in the letter is absolutely true.

Questions at The Open House

At the Open House, I raised a few questions to various Metro officials regarding how this Project would affect Eagle Rock business.  First, when will Metro make the decision as to which bus lane configuration to use, since that will determine how long it will take to build?  The answer was that this typically happens about 6 months after the Draft EIR is announced, and the Draft EIR is looking like 2020 or later..

Second, how long will the actual construction take on Colorado Blvd once it begins?  The answer was about a year, although given Metro’s track record that seems very tight..  Maybe more like two years?

Third, have the business owners along Colorado Blvd been personally contacted by Metro to obtain feedback about the proposed project?  If so, how? The response was that Metro was working on it.  Of course, if you look at the Chamber of Commerce letter, absolutely nothing has happened at all.

Also, I was approached by a stakeholder who raised a very  good point regarding the impact of this project. The bottom line is that none of the side streets off of Colorado are designed for heavy traffic.  He indicated that If there is no left turn on Townsend, all of the northern streets are simply won’t work.  So if people try to divert to them the whole area will become a parking lot.  This would also be true for Los Flores (one block north of Townsend), and for the north south streets like Hill Drive and Yosemite.  I haven’t heard anything from Metro about any of these issues.

The big news of the meeting were the comments of the two most directly affected Metro Board members - Hilda Solis (also on the LA County Board of Supervisors), and Ara Najarian, who is also the current Mayor of the City of Glendale as well as a multi generational Occidental College alum.

Board member Solis stated that she was “concerned about input before decisions are made”, and further that “no decision has been made”.   Board member Najarian stated that “No one on the Metro Board has voted for one project or another”.

The problem is that you can take these comments one of two ways.  As far as the actions Metro has already taken, the statements are simply not accurate.  As I wrote in an earlier post, an April 2019 internal Report recommended eliminating the 134 Freeway alternative, and that is what the Metro Board actually voted on, in moving forward with a Draft EIR.

The other way to interpret the Board members comments would be consistent with their telling the truth.  No one disputes that at any point in this process, the Metro Board can act by majority vote to change, amend, or for that matter even drop the project.

I choose to believe the latter.  These are seasoned politicians, who are pretty careful with their public utterances.  And notwithstanding the caveat that it takes a majority vote on the Board, when a vote involves the two directly involved Board members, it would be very unusual for Metro’s Board to decline to do what they ask.

The double question is how much internal conflict the good people of Eagle Rock can tolerate, and whether any of the existing businesses along Colorado Blvd would still be in business at the end of the project.  Take a look at the Crenshaw project.

Wow! Incivility, skullduggery, repurposing, and we’re only at the beginning of the scoping process.  I certainly hope that my analysis is correct that the Board will take another look at this project, because there is one thing certain. The very nice community of Eagle Rock is in turmoil.