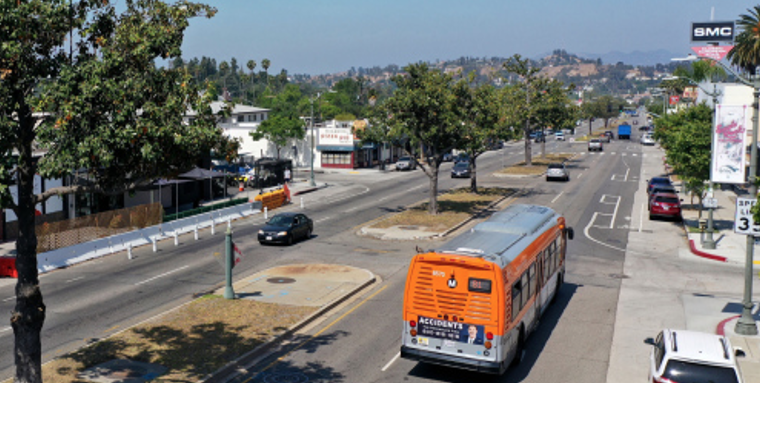 EASTSIDER-A few weeks ago, a very reliable source in Eagle Rock told me that Kevin de León had talked to a key Eagle Rock resident, informing him that the fix was in -- NoHo to Pasadena was going down Colorado Blvd and “get over it.”

Then last week, the LA Times suddenly claimed that Kevin is trying to stall the project. So what the heck is going on?

Here’s from the Times OpEd:

“Last week, the council member released a statement asking Metro to come up with another option that maintained two lanes of traffic in each direction and bike lanes, while attempting to restore medians and curb extensions. He also called for more in-person public hearings before Metro chose an option for Colorado Boulevard.

In theory, there’s nothing wrong with more public discussion and analysis. But activists in Eagle Rock are understandably worried that the delay is an attempt to undermine the Beautiful Boulevard concept in favor of a car-centric view of the streets. That would be disappointing, considering how De León has touted his commitment to fighting climate change and his support for transit and safer streets.”

I believe the true political determination of the Metro Board has always been to avoid the 134 Freeway and run smack dab through Eagle Rock Blvd. As I wrote back in 2019:

“The Recommendation says, “The refined Street-Running Alternative with Route Options is the most promising alternative in terms of ridership potential, improved service reliability, opportunities for Transit Oriented Communities, and regional connectivity.”

This was the basis for Metro staff recommending the freeway alternative be scrapped in favor of running along Colorado Blvd. through Eagle Rock up to Pasadena. As word of the recommendation leaked out, folks freaked out, leading up to Saturday’s Scoping Meeting held in a small community room at the Eagle Rock Plaza.”

After a lot of push back, it looked for a moment like the freeway route was back on the table, when the two key players on the Metro Board for this one, Hilda Solis and Glendale Mayor Ara Najarian, went back to the drawing board and reconsidered the 134 Freeway as an option.

However, as I noted at the time:

“The double question is how much internal conflict the good people of Eagle Rock can tolerate, and whether any of the existing businesses along Colorado Blvd would still be in business at the end of the project. Take a look at the Crenshaw project.

Wow! Incivility, skullduggery, repurposing, and we’re only at the beginning of the scoping process. I certainly hope that my analysis is correct that the Board will take another look at this project, because there is one thing certain. The very nice community of Eagle Rock is in turmoil.”

Those observations were back in October of 2019, and not a heck of a lot came out between then and this May announcement that the NoHo to Pasadena BRT Project would be on the agenda for action, as well as the LA Times OpEd.

Jack Ross, a writer for Capital and Main, recently had a CityWatch post affirming the case for BRT (bus rapid transit), while posing the key problem:

“Measure M, a 0.5% sales tax funding public transit in Los Angeles, passed in 2016 with 71% of the vote, easing past the 66% supermajority needed to approve taxes in California. But voters said they only supported Measure M to improve traffic by drawing drivers out of their cars and onto alternative transit modes, according to post-election research by Michael Manville. In other words, a typical Measure M voter approved the tax not to take the transit, but to better stay in his car — in the hope that other drivers would take the train.”

Aside from his observations, there are at least three questionable assumptions in the NoHo to Pasadena BRT proposal.

-- First, it assumes that downtown Los Angeles is still the hub, and that it will be helped with yet another TOC  (Transit Oriented Communities) development. A great rebuttal to that hype would be a post by our own Dick Platkin. Check out the full article, it’s a great read.

Or look at a recent NY Times article called “The Market Tectonics of California Real Estate” undermines that assumption:

“California, the most populous state in the union, saw its population decline in 2020 for the first time since 1850. But while reports of a mass pandemic-induced exodus from California are greatly exaggerated, there is a significant migration afoot. California’s biggest cities are shedding residents, while its suburbs and exurbs are seeing rapid population gains. The shift is fueling a red-hot housing market in areas once ignored by city dwellers, and turning some of the state’s secondary cities into small-scale boom towns.”

And even worse, just take a gander at the Nonprofit Quarterly’s excerpt from the book The Wealth Hoarders:

“Los Angeles is experiencing an empty homes crisis alongside acute homelessness. One report found more than 103,000 vacant units in Los Angeles with over 41,000 not on the market. There are an estimated 36,000 homeless families in the city. Tens of thousands of housing units are being withheld from the market by speculators and anonymous ownership entities (including trusts, LLCs and shell corporations) that are simultaneously overproducing luxury housing and fueling displacement, homelessness and a crisis in housing affordability. Of the 25 luxury condominium buildings profiled in the report, 2,399 of 3,244 units, or 71 percent on average, are sitting effectively vacant—they are not anyone’s primary residence.9”

For those interested, here’s the link to the book on Amazon.

-- Second, it is assumed that the Project will be good for the community of Eagle Rock because there will be this beautiful wide street with bike lanes, green stuff, and really cool BRT lanes.

While I wish the bike folks well, ask Mike Bonin how that worked out for him. Again, quoting Jack Ross’ piece:

“The paradox illustrates the city’s inability to address its mobility crisis. In deep blue Los Angeles, mass public transit investment — a flagship policy of the Democratic Party — is popular as long as it doesn’t conflict with auto transit, which is defended so bitterly that when city officials try to flip road space for bike or bus lanes they face recall efforts.

That’s what happened to City Councilmember Mike Bonin when he tried to remove 9.4 miles of car lanes in his Westside district for 4.3 miles of protected bike lanes. The 2018 recall effort failed, but the damage was done.

“The outrage was huge,” he says. “I think the reaction to it has probably set back the momentum behind protected bike lanes citywide.”

Further, notwithstanding an estimated build time of one year, I believe that most of the existing businesses on Colorado Blvd will be gone before the project ever finishes. More on that later.

-- Third, it will be built on time and on budget.  As we shall see, that’s likely to happen about the time that pigs fly.

Metro has a history of failing to deliver on projects, and reducing transit use in the process. Metro has experienced a 20 percent drop in total vehicle boardings since 2013. Metro boardings per capita are down 37 percent from Metro’s peak ridership in 1985 and, for all Los Angeles County transit operators, end-to-end transit trips per capita are down 42 percent.”

There is also another good critique of the 20-2028 plan by the Reason Foundation printed in April 2019. It demonstrates the extent to which Metro understates project costs, and  here is the link:

Having tracked this from the beginning, it seems clear that Hilda Solis and Glendale Mayor Ara Najarian have already decided to ram this sucker through for their own political reasons. Whatever the public face. That seemed obvious at the community meetings  in 2019. Seems to me the rest is a bunch of bureaucratic BS generating a ton of paper to support the decisions already made.

Kevin de León’s been around politics long enough to know this, and maybe that was what prompted his call to key Eagle Rock leaders. But he has a number of potential problems as this project goes forward.

First off, while bike lanes may be cool, just ask Councilmember Bonin all about them. Not to mention the truth is that the project will likely wipe out almost all of the existing retail businesses along Colorado Blvd, because they simply cannot survive a couple of years of the streets being torn up and their businesses functionally closed.

And that’s even if Metro chooses an option to keep some parking.

Further, those nice old houses surrounding Colorado Blvd will be a total mess. Their side streets are narrow, not built for heavy traffic, and a lot of them don’t even go anywhere. Ingress and egress will be directly affected, and what about people in their cars trying to get through the construction to get towards Pasadena?

Real estate vultures, on the other hand, are probably already salivating at the potential takings.

So it seems to me that de León is constructing a classic “anybody but me” defense. You know, the old “I fought the good fight, but they wouldn’t listen.” Doesn’t even cost much. Here’s the guts of his Press Release from May 13:

“My request of Metro is simple - now that the county is on the brink of fully reopening, they must hold a series of well-advertised and COVID-safe in-person meetings that allow the community to understand the options before them and where all residents of Eagle Rock can evaluate the best options and provide feedback. In addition, Metro should develop an alternative to the original F1 option that attempts to restore medians and curb extensions while preserving safe bike lanes and maintaining two through lanes consistent with feedback heard during the Draft EIR process. Metro should present both the new option and the Beautiful Boulevard Refined F1 option to Eagle Rock residents so that they can weigh the benefits of each.

I firmly oppose moving forward with an alternative for Colorado until Metro has held the aforementioned public meetings.

Regardless of where you stand on Refined F1, the lack of open dialogue and a robust discussion comparing alternatives has undermined the public trust and support. This is a huge and important decision for the community and should not be taken lightly.”

Stay tuned as we follow the course of the Metro Monster’s “Beautiful Boulevard Refined F1 option” and the political moves of de León.