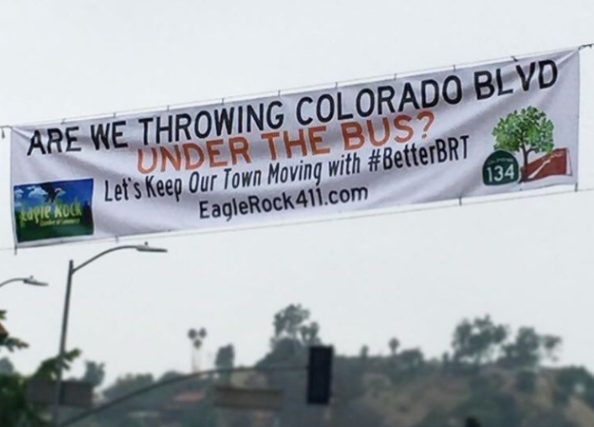 EASTSIDER-This one is going to tear up the communities in Northeast LA for a long, long time, particularly Eagle Rock, Glassell Park and adjoining areas.

Saturday afternoon a seriously way-beyond-standing-room-only crowd overwhelmed Metro and the Community Room they reserved for a “Scoping Meeting” over the controversial BRT (fancy code for Bus Rapid Transit) Plan which may go right up Colorado Boulevard in Eagle Rock to Pasadena.

So … what’s it all the controversy about?

Blame this exercise on God’s Gift to the Eastside (until the Fall) Jose Huizar. Yes him.  People forget two basic facts about Huizar. First, he was all in for the Complete Streets City Planning model, which makes environmentalists, pedestrians, and bicycle advocates all a twitter, as we try to get those nasty cars off the road. How and whether that actually works is a topic for another day. 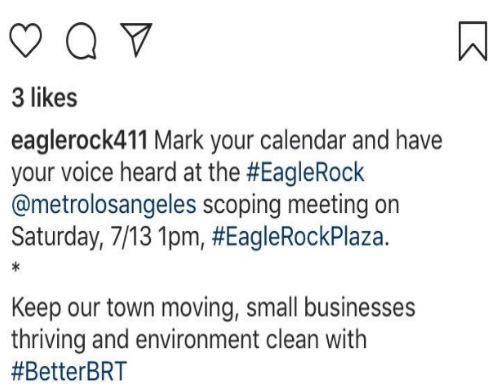 Second, you must remember that Huizar was appointed to the MTA (now Metro) Board of Directors in 2009, where he remained until 2013. Note the dates. Surprise: The study which led to Saturday’s meeting was a 2013 Countywide Bus Rapid Transit Study. It has his imprint all over it, shades of the City’s wonderful and ever so successful “Road Diet.”

Flash forward to 2017 when Metro (sans Huizar) unveiled its Technical Study Report, and to this year when we were gifted with both a complete Alternative Analysis and a vote on the Metro Board to move on with an Environmental Impact Report.

The overall plan is designed to get people from North Hollywood/Burbank/Glendale over to Pasadena via a rapid bus line corridor. That’s it, some 18 miles. It is obviously a laudable concept. The fly in the ointment, of course, is exactly what route this will take, and whether in the real world, any of it is cost-effective.

Metro divided the prize up into three segments: West (NoHo & Burbank), Center (Glendale), and East (Pasadena). Eagle Rock is included in the East as a necessary appendage to get to Pasadena.  Evidently the West and Center segments went without a hitch, along freeways.

Our part of the plan, through Eagle Rock to Pasadena, had two basic choices: go on the 134 Freeway, or go along Colorado Boulevard. It turns out that in a Report presented to Metro in April (a month before the May vote), there were a multiplicity of reasons for the staff recommendation to eliminate the freeway route.

The Recommendation says, “The refined Street-Running Alternative with Route Options is the most promising alternative in terms of ridership potential, improved service reliability, opportunities for Transit Oriented Communities, and regional connectivity.”

This was the basis for Metro staff recommending the freeway alternative be scrapped in favor of running along Colorado Blvd. through Eagle Rock up to Pasadena. As word of the recommendation leaked out, folks freaked out, leading up to Saturday’s Scoping Meeting held in a small community room at the Eagle Rock Plaza.

We’ve been through this process before with the City of Los Angeles and their infamous scoping meetings regarding Airbnb. In fact, the dynamics of this meeting reminded me very much of that meeting held in our area -- tightly controlled agenda, public comment only, no feedback, and tons of unhappy attendees.

As I wrote back in 2015 regarding the Airbnb listening session in Lafayette Park:

“Meanwhile, back at the Planning Department’s third and final Listening Tour (which had been mandated by the Council PLUM Committee), there was a continuous standing room only audience, mostly people opposed to the proposed Ordinance. They were given the “opportunity” to vent and to fill out a short survey -- but no chance for any real dialogue. There was no give-and-take, no discussion about how the process is going or what direction is being taken. Nada, nothing, zilch. The event did not even rise to the level of a regular dog and pony show.”

Much the same took place with this scoping meeting, although in fairness, that’s what a scoping meeting is. Metro provided mixed signals during their brief presentation. On the one hand, the study had two alternatives for the Eagle Rock portion of the route: the 134 freeway or Colorado Blvd. But Metro has also stated that the 134 Freeway Route is not in front of them for this exercise. After reviewing available documents, I think that the nuanced, honest answer is that for the initial scoping phase, the 134 is not under consideration, recognizing that the Metro Board can modify the scoping and add it at any time during the EIR process.

Anyhow, back to the community feedback, which consisted of speakers, speaker cards and giving two minutes for each person to weigh in. It was clear that this was public comment only, without Metro staff weighing in at all. The size of the crowd has been reported elsewhere as over 300 people, with those actually inside the meeting hall (and who could hear) significantly reduced by the LA City Fire Marshall.

In terms of the Public Comments themselves, the 70 or 80 speakers were loud, passionate, and surprisingly more in favor of the Colorado Blvd. alternative than I expected. Still, for what it’s worth, I think the 134 Freeway contingent carried the day.

However, let’s take two insider realities into consideration before assuming that what we saw was reality.

First, a friend of mine wanted to get the name and see the speaker card of one of the people testifying because she thought the person didn’t live in the district and was acting as a shill for the Colorado Blvd. alternative. She was refused this request, contrary to the public records act.

I’ve been through this one before. In order to match recollections with reality, you would have to see the video and then obtain the matching speaker card, and that’s not how the data collection works, unless I am mistaken. The reason it’s important is that Metro is going to have no idea (or the resources) to try and see who’s the real deal and who’s an outsider shill for one side or the other.

This is also important because there is reason to believe that none other than our buddy, Jose Hiuzar, is behind the scenes pushing for the Colorado Blvd effort, doubtless due to his personal agenda.  Item one: early on, the Chamber of Commerce put up a banner on Eagle Rock Blvd opposing the Colorado Blvd Route. Council District 14 immediately called and demanded they take the sign down on the grounds that CD14 “controls all signage in public spaces in Eagle Rock.” So much for allegations that the Chamber is in favor of the Colorado Blvd. route.

The second item is that TERA (The Eagle Rock Association), a Homeowners Association, also known as the Jose Huizar Booster Club, is supporting the Colorado Blvd route even as they are facing real pushback. This is not all coincidence. And in Northeast politics, it is not unheard of for proponents of something to get a bunch of people to show up en masse who are not actually from the area.

Before I get into the details, let me give a big shout out to the Boulevard Sentinel  newspaper, which is both online and in print.

They have done a great series of reports on the Bus Rapid Transit zooming through Eagle Rock that should be required reading. Please check out their website.

The reason this meeting reminded me of the Airbnb scoping session I mentioned, is that in both cases the outcome was predetermined. There, the shape of the Airbnb Ordinance was already in the bag. Here, with no consideration of the 134 freeway, the result is already given. Remember, for all the passion, there is no consideration of a freeway alternative on the table.

From my standpoint, we are at the inside politics phase of the NoHo to Pasadena BRT Plan. The question is whether or not there is any realistic way to get the Metro Board to re-examine the 134 Freeway as an alternative to Colorado Boulevard. This would not be trivial, given the inertia and how far along the process has already come.

Absent bigtime political pushback, this is a done deal. Which does not mean that it’s the right idea. In examining the minutes of the May 23 Meeting, the action was essentially a consent item, which had been carried over from the April Metro meeting.

In another article, I will provide some reasons why I think both alternatives should be examined, as well as the entire concept. If you go back to the promises of Measure M (a permanent 1/2 cent increase in sales tax for Metro), there are real questions as to what we the public got and are getting for our money.

There have been a number of articles in places like CityWatch, the Daily News, CityLab, and even, gasp, the LA Times which call into question how all this money can produce significant decreases in ridership, huge capital projects, and no decrease in the use of cars by Angelenos.

Not to mention whether the TOT concept has valid statistical proof or is just another developer wet dream of no use to you or me.