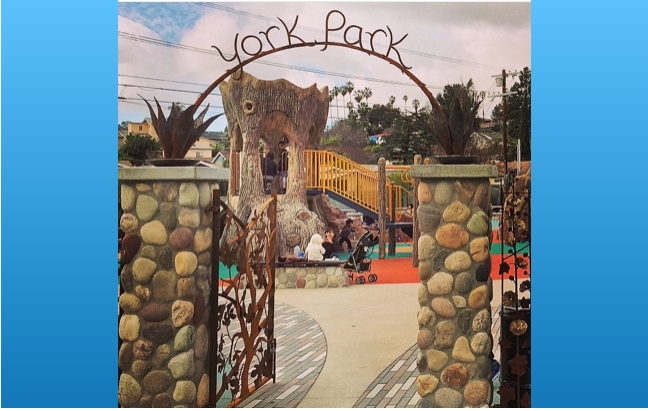 EASTSIDER - It’s getting boring to say that I couldn’t make this up, but it’s true. LADOT is going to build a traffic circle at 50th and Meridian, by the York Park, even though it’s the wrong place.

At the same time, the entire City family is running away from doing anything about the probable toxins underneath the York Park itself, although it poses a potential serious health hazard to the kids who use the Park.

In a previous article I referred to the “don’t confuse me with the facts” mentality of City Departments, such as LADOT. In that article their staff was taking a victory lap for a useless project:

“To make matters even weirder, without any noticeable notice, during the same week we were asking about cone studies, LADOT conducted a cone study off of Avenue 50 and Meridian in CD14. It was a traffic circle, a block north of Huizar’s park on Ave 50 and York Ave.

When I questioned the LADOT staff present (Clare Eberle, a former Huizar staff member), I was told that this was an old 2015 Jose Huizar special, using State funding with Federal help of some sort, and isn’t it cool?

Also, another former Huizar staff member confirmed that this project is, you got it, a done deal, but it was to be kept under the radar. As in, don’t tell the troops.”

For this article I reached out to my friend Caroline Aguirre, who lives in the area. Here’s her comments:

“For all of us who reside in this immediate  area have known for years that individuals who travel southbound on Avenue 51 ( a connection route for vehicles and DASH buses from Eagle Rock to Highland Park ) believe that they are traveling on a freeway. It is not unusual to see drivers traveling at around 50-55 MPH on southbound Avenue 51.

Prior to August 12th, I had a face-to-face conversation with Mariana Valdivia  ( Administrator with the Los Angeles Department of Transportation ) This conversation took place on the street corner of Avenue 50 and Meridian on the date of a cone study for a Neighborhood traffic circle at this same location. Myself and other community residents told Ms. Valdivia that this traffic circle should be located at Avenue 51 and Meridian due to the increased flow of traffic and the documented history of traffic accidents at this intersection and that individuals  who drive southbound on Avenue 51 travel at high rate of speed over 40 MPH. As per. Ms. Valdivia this traffic circle was a done deal and any comments or concerns from the local residents were useless.

I might add that I have personally communicated with now CD 14 councilman DeLeon when he resided on the 4900 block of Rangeview Avenue and requested speed bumps for both Rangeview and f Strafford Avenue  because of those individuals who travel down Avenue 51 use both of these  side streets traveling  at high rate of speed to avoid the congested traffic on York Blvd. I also communicated this same information with CD 14 current staff members assigned to the Northeast area CD 14 office. I also requested Orange colored caution lights to be placed on Avenue 51.

As of this date. No Orange Caution Lights.”

The reason I think this is important is that there is no basis for building a traffic circle on 50th and Meridian. The actual traffic problem is one block away on Avenue 51 and Meridian, which commuters use like a freeway.

However, after reaching out to LADOT, they don’t give a damn. The approval is for 50th and Meridian (photo above) and by God it will be built there, damn the torpedoes.

Ditto for CD 14. Proof that no one in the City from LADOT to the Councilmember for CD 14 apparently wants to do their real job.

This one involves children, with (remember him?) Jose Huizar bypassing the entire planning system to build a parklet (York Park) on York and Ave 50. One where there may be serious toxins in the ground where the kids play. As I wrote a bit ago:

“The immediate question is how could Huizar build a pocket Park on York Blvd without serious testing of the soil?

And a bit later in the post, Huizar boasts:

I brought in the Green L.A. Living Streets team to work with my staff and community members on improvement plans for York Boulevard in Highland Park and Huntington Drive in El Sereno.” In 2010, the Council office earned grant funds for new planning efforts on York Boulevard and El Sereno Street.  Rather than engage in a typical planning process, Huizar teamed with Living Streets and Cancian Rasmussen”

In a recent discussion with Emily Spokes from the Highland Park NC, it appears that they got a letter from Kevin de León (CD 14) dated August 5, which basically says two things. First, some entity called RAP says that the site is safe. Also, ducking any further action, the NC is referred to another alphabet agency called LARWQCB.

While I’m trying to find out what these acronyms mean, it is obvious that no one in the City evidently wants to go to the obvious outside scientific agency in charge of this kind of thing at the State level.  Namely, the DTSC, whose full name is the Department of Toxic Substance Control.

These are the people who did the final testing on the Avenue 34 Development over in Lincoln Heights, finally determining that the site is toxic indeed. As I wrote at the time,

That’s because the site sits adjacent to Welch’s former industrial dry cleaners that operated for nearly 70 years. During that time, massive amounts of toxic chemicals and solvents, including possible carcinogens like trichloroethylene (TCE) and perchloroethylene (PCE), leaked or were dumped into the soil and groundwater, requiring extensive cleanup. The Department of Toxic Substances Control (DTSC) recently ordered the developers to conduct tests on the proposed building site, which detected elevated levels of these same chemicals, among others.”

Since York Park involves children and Huizars highly questionable legacy, it seems to me that the State agency is the proper place to go and find out the real answer.

These two issues are both works in progress and tell a tale of City agencies and elected officials not really doing their jobs of helping and protecting the very Angelenos who put them in office. It’s an insider game, not a rational, functional bureaucracy.

While I’m at it, I’m still waiting for someone to tell me what RAP and LARWQCB actually stand for.