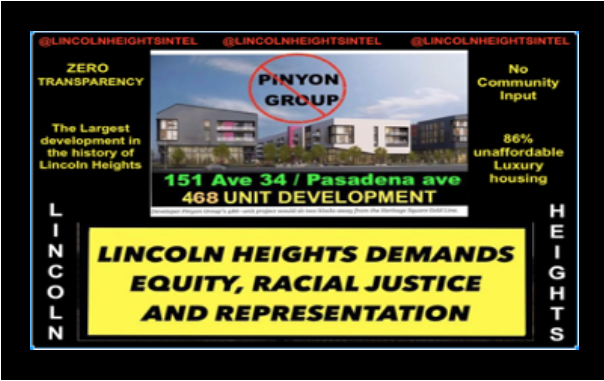 EASTSIDER-It’s no surprise that the Ave 34 Project has a troubled and slimy history.

And now we find that after the Planning Commission gave the go-ahead for the project, new evidence proves that there are harmful toxins at the site.

With a lot of help from Michael Henry Hayden, Richard Larsen, and Lincoln Heights Intel, we discovered during the Planning Commission hearing back in September of last year, that potential toxic chemicals underground were being ignored:

“Case in point -- a property next to the proposed building project, has known and serious pollution problems. Yet the Determination letter from the Planning Department simply indicates that there are no anticipated problems.

“Yet the adjacent site in question was home to Welch’s Dry Cleaning from 1920-1968 and involved dumping dangerous chemicals for over 60 years. I think they were even a Superfund site for a while. But you wouldn’t know this without looking through the some 1560 plus pages of the Phase 1-Environmental Study.

“Further, if you believe the Determination letter, the proposed site is a virgin, with no possibility of the crud from an adjacent site migrating over to the proposed site. No sir, no need to check it out before 1500 or so people buy a unit.

“The Planning documents say, ‘not to worry,’ based on a determination that the water table will only have water moving in a single direction, away from the new site. However, the Department of Toxic Substance Control confirms that the groundwater runs through this property, not away from it as the Phase 1 suggests. With no scientific backup. Within a couple of hundred yards of the Arroyo, and under 2 miles from the LA river! If you believe that. . .”

Later in October 2020, still during the hearing process, we found out that the State Department of Toxic Substances Control (DTSC) had never even cleared the new project as required by law:

“For example, I do not think that the DTSC (Department of Toxic Substances Control) ever cleared this project. In fact, in an email to Michael Hayden last month, an Environmental Scientist confirmed that the water flow from the toxic Welch’s site indeed flows to the southwest, under the proposed Project. Further, that information in is publicly available here.

“DTSL also indicated that they are not currently involved in regulatory oversight of the addresses in the Proposed Project. So what was the Planning Department doing?

“I may be wrong, but in terms of process I see no provision for the Planning Department to call for a public hearing so that the community can weigh in prior to finalizing any Determination. With such a huge luxury development that seems like a denial of basic due process to the very community who will have to live with what is built where they live.

“Looking at all the players involved in this project, if this Project is legal, we need a new dictionary definition. Or maybe it’s another one of those “only legal in the City of Los Angeles” specials.”

Of course, this being Los Angeles, the Planning Commission rammed this iffy project through with only 1 no vote, and later the Planning Department moved to increase the cost of a citizen appeal to over $1600. Ya gotta love the 15-0 Council system and their pre-lubed predeterminations.

In a very good article at Capital and Main, we just discovered the following:

That’s because the site sits adjacent to Welch’s former industrial dry cleaners that operated for nearly 70 years. During that time, massive amounts of toxic chemicals and solvents, including possible carcinogens like trichloroethylene (TCE) and perchloroethylene (PCE), leaked or were dumped into the soil and groundwater, requiring extensive cleanup. The Department of Toxic Substances Control (DTSC) recently ordered the developers to conduct tests on the proposed building site, which detected elevated levels of these same chemicals, among others.”

So let’s parse this a bit. After the City ignored the health of Lincoln Heights stakeholders and rammed this turkey through, the DTSC was finally forced by community pressure to send a letter to the City in April ordering that testing be done by the developer.

Of course, the Lincoln Heights community had to file a CPRA (California Public Records Act) with DTSC to even get a copy of the Developer, but what else is new.

Finally having to comply, the Developer’s agents, signing off as “The Avenue 34 Team,” put out two separate and misleading doorknockers to area residents, minimizing the concept that there could be real toxins in the site, and assuring everyone that all would be cool because of the Developers “commitment” to Lincoln Heights. Horsepuckey.

And to no surprise, the DTSC indeed found significant toxins, like PCE toxins something like 18,000 times over the limits. The State limit of PCE for residential housing is 15 ppm. The highest concentrations found in this testing were 280,000 ppm. That’s 18,666 times higher than the residential limit. This is real.

So the question is, what’s LA City going to do about this? The system obviously failed. I suspect the Planning Commission is nowhere to be found (although the giant fee to file an appeal is still in the hopper), and the developer still has an approved project.

It looks like there may be hope from an unusual source -- CD1’s Gil Cedillo. He was evidently as surprised as everyone else when it was revealed during a City Council meeting that there are real honest health issues over the toxic subsoil underneath the Ave 34th Project.

I have anecdotal evidence that at the meeting Cedillo indicated that if the Ave 34 Project poses a real danger to Lincoln Heights residents, it should be stopped. This is hearsay, of course, so I reached out to the Council office for verification. As of my deadline, I have not received a response.