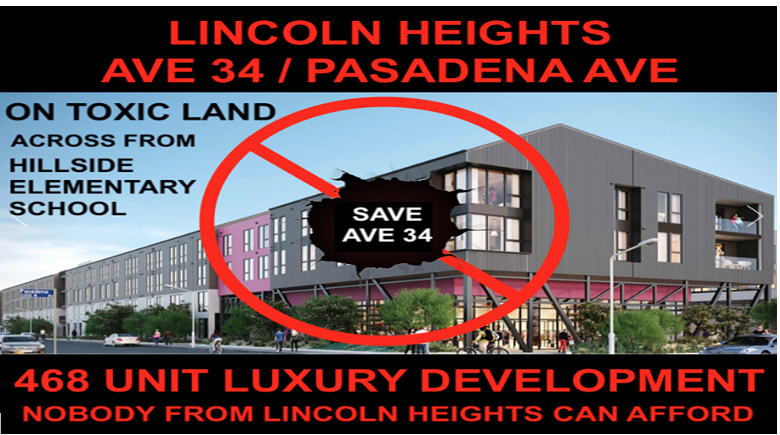 The ghost of Jose Huizar just won’t go away, and some of his folks look to be involved in the Avenue 34 Project. Here’s what we know, what we think, and what we are investigating with the wonderful people who live there who are fighting back.

One key player in this project is Arturo Gonzalez. I remember him from 2011-2012 at the El Sereno Neighborhood Council meetings. The big subject then was a “Special Fund” for Jose Huizar, called CLARTS.

While many elected officials have control of special funds in their District, this one generated a lot of money -- up to $1 million dollars in a single year at one point. And back in the day, Huizar’s Chief of Staff, Anna Cubas, showed up in El Sereno to flatly refuse to discuss the fund or provide any information. Not to mention Arturo Gonzalez lurking in the background.

This was a time when Arturo was Huizar’s District Director for the area. The reason this is important is we found out that, in fact, Arturo was using over a million dollars from that fund to pay for Huizar’s staff, instead of helping out the community. For the best analysis of all this, check out a post in the blog MayorSam, which you can find here.  It’s illuminating.

Another good source is a LatinoPolitics.com blog post here.

Arturo has had a long run in Northeast LA, and folks are quite aware of his style of politics. So, let’s see what he’s been up to lately. Furthering the Huizar theme, during that same time frame, Arturo had a buddy named George Magallanes, who started as a Jose Huizar staffer for Boyle Heights.

Remember, the Avenue 34 project has been going since 2016 with two different developers, but the same (kinda sorta) project. As someone pointed out to me, during this same time frame, God’s Gift to the Eastside, Jose Huizar, was in full bloom.

Looking into recent events, Arturo Gonzalez and his company, Urban Strategy Group, Inc., were fined a total of $30,000 for failure to register and report as a lobbyist from the first quarter of 2017 through the third quarter of 2018. A time when the project was active under the first and second developers’ proposals.

What is interesting about the Ethics Commission action is that in the Stipulation and Order itself, we find the following tidbit:

From August 2015 to mid-2017, Gonzalez complied with the MLO‘s registration and reporting requirements. In late 2017, USG changed its business model, intending to focus on event planning, which they believed would limit their lobbying activities to a level that did not require registration or reporting. USG said they attempted to disengage themselves from lobbying work by providing only general assistance to clients who had separately employed registered lobbyists.

A quibble with the Ethics Commission -- as a part of a stipulated settlement, the Commission makes absolutely no mention of the parties involved in the dispute in question, leaving the public in the dark.  As of this writing, they have not responded to a request I made last week regarding this Order.

We now know what the new business model turned into, and it absolutely relates to the Avenue 34 Project. At the last hearing, I was informed that people were being paid to testify on behalf of the project. For something like $100 a pop. Well, guess what? Through another front, this one called avenue-34.com (https://www.avenue-34.com/)  we find the following greeting:

“Avenue 34The Avenue 34 Project is a new development in Lincoln Heights that is Gold-Line adjacent and provides housing and open space.”

And thanks to the sleuthing work of the Lincoln Heights community, we now know that the site is really none other than a front for Arturo Gonzalez and his sidekick, George Magallanes. It appears that the new business model of “one step removed from lobbying” work means holding community outreach events, like Avenue -34.com’s Zoom Community meetings regarding the project.

While I’m still looking for the proof, it seems as though the people who show up to the community events have their information forwarded over to Bridge DTLA, so that they can be contacted later and urged to testify in favor of the project in exchange for $100, advertised as:

If you check out Bridge DTLA, they just happen to have DLA Piper as a client. Like Andrew Brady, the project’s attorney. Why does all this smell like a Huizar clone?

And oh yes, just to close the circle, there’s the matter of a Joint Tax Credit Committee Allocation Application by the City of Los Angeles and none other than R-Cap Avenue 34, LLC. No bid. For $851,827. Co-signed by Timothy Elliot, Community Housing Program Manager. With the applicant contact information listed as Kevin Ratner, in a joint venture with parent company Avenue 34 Development LLC.

To this point, we have looked at the political insides of the road to a Directors Determination on the Avenue 34 Project, which is currently under appeal with the Planning Commission.

I think there is enough in our trail of breadcrumbs to warrant an external Agency such as the FBI to drill down into the matter. They have the resources and are already familiar with Jose Huizar and his progeny.

How Did the Planning Department OK This Project?

Shifting from the political to the technical process of the LA City Department of Planning, I am amazed that the Project was given a green light. Although I have an idea how.

As an outsider, it seems to me that planning approvals in LA are entirely between the Planner and the developer juggernaut team of god knows what industry insiders. For example, looking at the  California Tax Credit Allocation Committee Application, we see the following LLC’s and the like who are involved in this project:

If a normal person like me tried to fight all these insiders I would end up like the proverbial bug splattered on the windshield. No chance. Nada.

So to me what this all means is that, with no public input, the Planner and the developer team go through an iterative (in theory) process of filling in all the blanks to fit a Directors Determination.  When it’s done, it’s rock & roll, and build away.

While I am an outsider, I am capable of reading, and It seems patently evident that the Planning Department’s Determination on the Avenue 34 Project was rife with factual errors and omissions. So I would like to see what if any controls the Planning Department has to review a Determination before it ever goes out, in order to determine if it is solid or a bunch of horse puckey. Before rubber stamping it.

For example, I do not think that the DTSC (Department of Toxic Substances Control) ever cleared this project. In fact, in an email to Michael Hayden last month, an Environmental Scientist confirmed that the water flow from the toxic Welch’s site indeed flows to the southwest, under the proposed Project.  Further, that information in is publicly available here.

DTSL also indicated that they are not currently involved in regulatory oversight of the addresses in the Proposed Project. So what was the Planning Department doing?

I may be wrong, but in terms of process I see no provision for the Planning Department to call for a public hearing so that the community can weigh in prior to finalizing any Determination. With such a huge luxury development that seems like a denial of basic due process to the very community who will have to live with what is built where they live.

Looking at all the players involved in this project, if this Project is legal, we need a new dictionary definition. Or maybe it’s another one of those “only legal in the City of Los Angeles” specials.

I don’t pretend to be a Planning Department maven. I leave that to CityWatch colleague Dick Platkin, who spent his career as an LA City Planner. But I must echo his conclusion that the LA City Planning process is broken. Badly.

How many Determinations are actually appealed? I’m guessing not many.

And looking at just this tip of the iceberg that the Lincoln Heights Community has been able to unearth in a very short period of time, it looks like the ghost of Huizar is all over this project. Former staff, developers, architects, project lawyers, community outreach folks, and lobbyists all linked to greater or lesser degree. Just like the litany of players in the Tax Credit Joint Application.

I certainly don’t have the resources and skill set to pursue this project to its end, but I would urgently suggest that the LA City Planning Commission grant the appeal before it, unless they want to look like a bunch of shills for developers.

I’d like to thank all the community activists who have helped me on this journey in doing the right thing -- like a number of individuals from Lincoln Heights, and the Lincoln Heights Neighborhood Council Land Use Committee who have had a heck of a time with outsiders.

And the blog LincolnHeightsIntel, that organized and has produced 3000 signatures in opposition to this project. That’s right. They’ve organized more people than probably bothered to vote in Jose Huizar's last election.

Here are a couple of links to Facebook  Check them out.
Absent their ability to help organize the Lincoln Heights community and pushback by partnering with people who had access to folks who actually do know the process, this project would have been final, based on the terribly flawed Directors Determination.

And they had to scramble to come up with the money to file and mount an appeal with the City Planning Commission.

I understand the Planning Commission consists of political appointees of Mayor Eric Garcetti, but however they got there, please, please, do the right thing on the proposed Avenue 34 Project. Grant the appeal, and it wouldn’t be out of order to publicly spank the LA Planning Department for shoddy work which would make an actual neutral third-party cry.

I also urge Gil Cedillo’s office to man up, follow up this letter, and urge the Commission to grant this appeal. This Determination really smells.