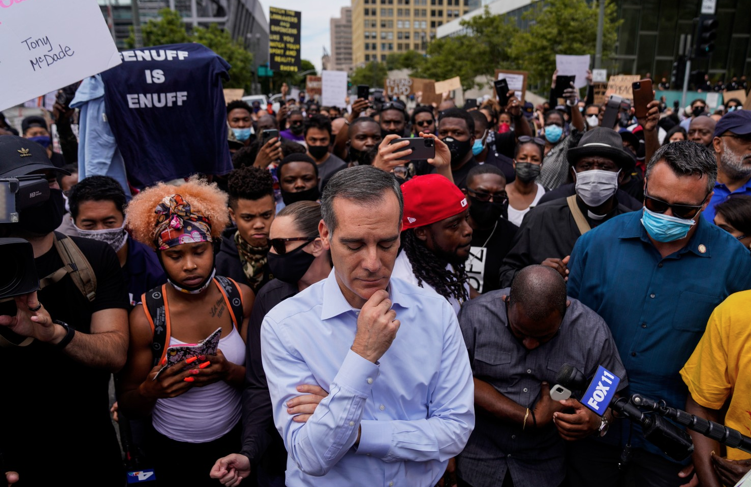 ALPERN AT LARGE--There's plenty of blame going around for the current rise in crime, chaos, and the new rise of COVID-19.

No one, from the President on down to each and every one of us, must ask ourselves and our neighbors if we can't do better. But many of our nation's current mayors are absolutely just the worst.

And WE elected these clowns, who clearly don't give a damn about the cities and their stakeholders, who they're supposed to lead, and make safe and prosperous, for ourselves and our families. So maybe WE are to blame.

Our governors have spotty and mixed records, like Andrew Cuomo in New York, as well as Gretchen Whitmer in Michigan, Tom Wolf of Pennsylvania, and even Gavin Newsom here in California over the huge number of COVID-19 nursing home deaths, and their inability to find the right balance between safety and our economy.

But unless you're a Republican or Democratic partisan hack, there's plenty of hits and misses on the parts of all our governors. On the other hand, the mayors are absolutely terrible:

1) Let's start with Lori Lightfoot, mayor of Chicago, who's got so much blood on her hands that it's hard to understand how this terrible individual lives with herself. Her response to White House press secretary Kayleigh McEnaney, who referred to her as a "derelict mayor of Chicago" and not doing enough to resolve the city's gun violence?

I've an idea for a few choice epithets myself, Mayor Lightweight, or Mayor Murdermaster, or Mayor Failure, or Mayor Blood-Up-To-Your-Neck Trash-Talker. How about the endless wave after wave of violent shootings and deaths of black and brown citizens in Chicago, which probably ranks up there with South-Central Los Angeles during the horrifying and terrible Crip/Blood Wars?

How about the names Derek Teague, Enrique Gonzalez Jr., Tavion Edwards, Berasheet Mitchell, Charlie Perez, and countless others...none of whom can EVER "watch their mouths" or ever open their mouths again?

Because they're dead. And while it's easy (and accurate) to blame President Trump on a lot of things, the weekend slaughters of Chicagoans, mostly black and brown, is on YOU, Lori Lightfoot.

Each one of these individuals, black or brown or otherwise, had first and last names, families and dreams, hobbies and hopes...all torn away, and forever gone.

And until you accept help from the feds or the state, the death count is NOT on any "Karen" who calls you out, and who like the rest of us are SICK of being told WE are racist when we decry the deaths of black and brown urban residents.

2) Next, let's move on to America's arguably WORST mayor, Bill de Blasio of New York. Even fellow Democrat Andrew Cuomo has decried the horrible way de Blasio handled everything from COVID-19 (go ahead, ride those subways, let's fill up the nursing homes with sick patients, embrace all the foreign tourism you can) to his handling of law and order issues.

Similarly, the Black Lives Matter protests, which started after the horrible murder under the knee of ex-cop, current thug/jail inmate Derek Chauvin, has led to a furthering of the awful relationship de Blasio already had with the NYPD. Deaths and shooting are way up and most of the victims are black.

Three questions, Mayor de Blasio (whose own citizens wanted no part of him running for President when he briefly ran):

3) Philadelphia's own gun violence has surged, with 23 people shot in a single day, and 35 shot over July 4th Weekend.

Funny how that happened after the mass firings of homicide prosecutors by DA Larry Krasner. Well, Philadelphians elected this creep, and now communities are increasingly rife with crime, so it's anyone's guess how many are now recognizing that their Second Amendment rights may be their own horrifying way to survive in this "civilized world" of Philly, the City of Brotherly Love.

4) And on to Seattle, where Mayor Jenny "Summer of Love" Durkan has overseen a barbaric rise in crime thanks to CHOP (Capitol Hill Occupied Protest) zone and a "no-police policy").

It may be fun and games to Mayor Durkan, who more likely than not has seen fit to "CHOP" off her own political future, but perhaps this woman (who's guilty not only of naivete but downright cruelty) can find it in her heart to reimburse those whose businesses and futures have been shredded forever.

And to those who died because the police were demonized and told to get lost? How about Antonio Mays, Jr., who was black? Did his life matter? Did the others' lives matter? Are WE the ones who are racist because we're fighting mad about his unnecessary slaying?

No, Mayor Durkan, you're not above the fray. You caused this and told the feds and police to buzz off when we needed them the most. Wash your hands all you want, but the blood won't go away.

5) Not to be outdone in the Pacific Northwest, Portland Mayor Ted Wheeler has overseen his own dreadful increase in gun violence.

Meanwhile, Antifa is "okey-doke" but federal troops were and are NOT welcome by Mayor Wheeler when rioters started destroying federal buildings.

So, let us get this straight, Mr. Mayor: rioters and anarchists...good, federal troops enforcing the law...bad?

Would, say, a Biden Administration sending in federal troops to protect federal property and arrest lawbreakers be OK, but not from our current Administration? Or none of the above? And is THIS what is now defined as "civilized" in liberal, woke Portland?

6) Finally, it's back to home: good ol' L.A., where Mayor Garcetti was overseeing a lowering of the COVID-19 count and a reopening of many businesses. Then the protests (hard to blame anyone from protesting) when George Floyd died led to riots and absolutely NO warnings on behalf of the Mayor to distance and wear masks.

And... whaddaya know? Two weeks later, the COVID-19 numbers started going up and we're almost on the verge of a stay-at-home lockdown thanks to protestors who went WAY beyond civil rights, and who started trashing the City and spreading the virus in ways that opening businesses never could.

And crime and homicides in the City of the Angels? Going up, way up. Not just because of warmer weather but because the police are suddenly Public Enemy #1.

Bulletin to Angelenos: ever since Police Chief Bratton, Los Angeles has been doing more community-based policing than most major cities and has gotten by with low crime rates with fewer police per capita as a result.

Just because ignorant mobs who confused Los Angeles with Minneapolis and who wanted to emasculate our police, came out in large numbers to allow all sorts of crimes, riots, and damage to occur ...

... doesn't mean that the mobs were right. In fact, the self-righteous mobs were NOT right.

So perhaps those who want to "defund" the police and send unarmed social workers to their deaths when domestic violence and other violent, dangerous situations occur, should eschew all police protection.

You're just screaming louder than the law-abiding, police-respecting majority.

Cowardice unto lawbreakers does not courage make unto the law-abiding.

So to those American mayors who smack on the face the law-abiding business owners and other responsible citizens, while giving a soft kiss to the lawbreakers and anarchists, the question goes out (and to the small but LOUD subset of voters who think that these mayors are juuuuuust fine):

Whose side are you on? Who do you represent? And why bother following any laws, or bother calling any police officer, if law and the police and the COVID-19 crisis means so damned little to you?

(CityWatch Columnist, Kenneth S. Alpern, M.D, is a dermatologist who has served in clinics in Los Angeles, Orange, and Riverside Counties, and is a proud husband and father to two cherished children and a wonderful wife. He was termed out of the Mar Vista Community Council (MVCC) twice after two stints as a Board member for 8-9 years and is also a Westside Village Zone Director. He previously co-chaired its Outreach and Planning Committees, and currently is Co-Chair of its MVCC Transportation/Infrastructure Committee and Vice-Chair. He was co-chair of the CD11 Transportation Advisory Committee and chaired the nonprofit Transit Coalition and can be reached at Ken.Alpern@MarVista.org. He also co-chairs the grassroots Friends of the Green Line at www.fogl.us. The views expressed in this article are solely those of Dr. Alpern.)