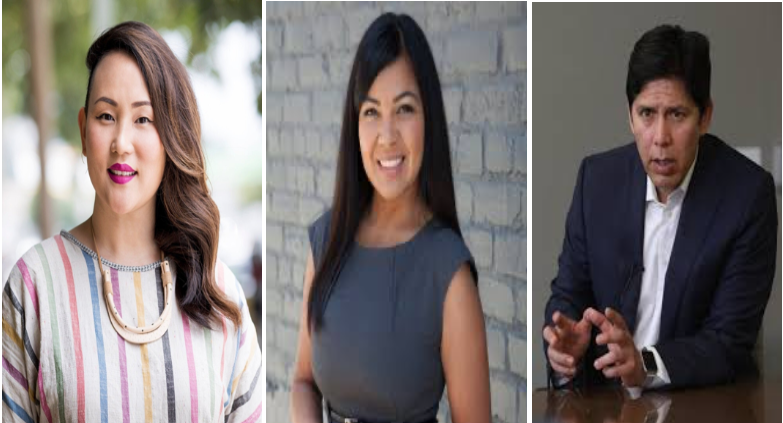 EASTSIDER--There have been a flurry of events over the last few weeks here in Northeast LA, featuring the 5 candidates to replace Jose Huizar.

My take is that the heavyweights are two smart women; Cyndi Otteson from Eagle Rock on my side of the District, and Raquel Zamora from the opposite end of the District in Boyle Heights.

The other three candidates are Kevin DeLeon, LAUSD Board member Monica Garcia, and outsider John Jimenez with no funding but good ideas.  Kevin is the favorite, of course, with all the outside money from all those lobbyists and special interests in Sacramento, paying off their debts from when he was Speaker Pro Tem of the California Senate. And Monica Garcia brings a ho hum campaign to the City with fuel from the Charter School folks who brung her to the LAUSD.

But I think Cyndi Otteson and Raquel can give Kevin a grassroots home grown run for his money.

Back in December, the East Area Progressive Democrats failed to endorse for CD14, although to be fair, Cyndi got 56% of the vote.  On January 17, a coalition of eastside Neighborhood Councils  teamed up with the League of Women Voters to hold a Candidates Forum in El Sereno at the Presbyterian Church on Eastern Ave. Obviously there were no endorsements and with the number of candidates did not produce a clear winner.

Then on January 22nd, the Northeast Dems (NEDC) held their endorsement meeting, and at that meeting Kevin obtained their endorsement.  In fairness, there was not a huge turnout for this event, mostly us faithful Dems, but Kevin worked the room in person and with his team.  Endorsement, Kevin DeLeon.

Finally, on Saturday January 25th, the Glassell Park Improvement Association held a town hall with all 5 candidates present.  I found their format very interesting; they had a set of tables, with each candidate rotating from table to table, directly answering questions from the stakeholders.  A lot of information came out that was useful to voters, even if they couldn’t endorse any candidate, so hat’s off to the Glassell Park Improvement Association and their President, Helene Schpak.

So, what does all this activity mean?

Cyndi is a real grassroots local democrat.  Born here, lives here with her children in the LAUSD school system. Herself a 2nd generation Korean American, she launched  Miry’s List, helping refugees resettle in the US. She also was a VP in the Eagle Rock Neighborhood Council and has been active with CD14 stakeholders.

I liked some of her specific proposals if elected.  She made a couple of specific commitments that make sense to me.  First, Glassell Park needs to be in one Neighborhood Council District, instead of the 3 Council District gerrymandered mess that Herb Wesson, Jose Huizar, and Gil Cedillo presented us with.  To that end she notes that the 2020 Census and getting everyone to be counted is critical, and vows to do everything in her power to keep Glassell Park within one District (CD14).

She would also get the City to have early warning reports sent to the Neighborhood Councils, in plain English on Planning issues, and require the City to allow for NC input prior to taking any action.

Raquel is another grassroots local democrat.  Born and raised in Boyle Heights, she is raising her 4-year-old daughter in the same area.  Further, the family business, Zamora Bros, has been there for some 50 years.

A Saint Mary’s/USC graduate with an MSW (Masters in Social Work), she currently works for LAUSD as a Pupil Services and Attendance Counselor.  Before that, she was a teacher for 11 years.  As such, she deals with students and families experiencing hopelessness. So, she knows firsthand how important it is for the City to work seamlessly with the LAUSD over the homeless issue.

How about dual use of land where the school parking lots could be used by constituents at night to avoid parking citations?  With the number of homeless students at LAUSD it makes sense to me.  As a teacher, mental health therapist, and foster care social worker, these issues and people are real to her, not some policy talking point.

She and her family have deep roots in District 14.  Not only did she work in the family business, her grandmother worked at Olvera Street for 60 years.  So, she brings a firsthand understanding for small business, something beyond the ken of our current elected officials.

In my world, this is pretty cool and unusual stuff.  Two women, young, with deep roots in their community, and with specific ideas to work for us at City Hall  instead of City Hall itself.  And by the way, they both promise work their entire term in the position they are running for.  Not, for example, taking a shot at Mayor in 2022.

Further, demonstrating their commitment, UTLA has issues a rare Joint Endorsement for both Cyndi and Raquel. This should help with historic low turnouts in our primaries.

And Then There’s Kevin DeLeon

Notwithstanding the democratic establishment, is clear that Mr. DeLeon has sparked controversy.  Consider a recent CityWatch article by Mary Fischer.

While that article concentrates on his ‘maybe does, maybe doesn’t’ really reside in CD14, the article underscores the difference between a professional politician looking for their next gig, as opposed to home grown candidates who actually have lived in the District for a long time and understand the issues on a first hand, long term basis.

I have previously written about Kevin DeLeon back when he was running against Dianne Feinstein.

As I wrote in that article,

“My point is, we in Northeast LA pretty much have top down democratic establishment candidates foisted on us, already loaded with big donor support/funds. Antonio, Kevin De Leon, Jimmy Gomez, it all starts to blur.”

Here is the real problem with any of our politicians who get into the California Legislature, and then do their two terms in the Assembly & Senate, and it is not unique to Kevin DeLeon.

For as long as they are in Sacramento, they are beset by those who want something, be it a piece of the huge budget, or some special interest favor and/or legislation.  To accomplish this goal, the Capitol is awash in lobbyists, money, and ass-kissing that can be only found here and in Washington DC.

In short, they enjoy over a decade of being treated as a “very important person’. Then, suddenly, these soon to be termed out legislators must start looking around for their next job.  And there aren’t a lot of those jobs available that would confer status equal to that which they have become accustomed.

So, after losing to Dianne Feinstein, Kevin was faced with the default of running for CD14 on the heels of his old buddy Jose Huizar.  The good part is that it pays a lot of money.  The bad part is, truth to tell, being a City Council member does not confer the status of doing ‘big things’ like statewide legislation.  In fact, it’s boring.  Small potatoes.

But a guy must have a gig.  And in this case, the position of Mayor is open in 2022 when Garcetti is termed out.  Now there’s a prize.  So, the likelihood is that he will do an Antonio and bail out halfway through the term to run for Mayor. Perhaps good for Kevin, but not good for CD14.  And I remember that Villaraigosa was more interested in his Mayoral run than he was in the residents he represented for 2 years.

This race could be a real doozy, and I’m jazzed.  In Tony’s “I wish” world, there could be a runoff. Remember, Monica Garcia  is also running for CD14, and she should generate a lot of Charter School money to pay her back for her years of service to them on the LAUSD School Board.  In this field, I do not think she is competitive, but that does not mean that she will not garner a respectable number of votes.

Wow! A runoff.  One can dream.  So, like the header says, it’s Two Smart Women and Kevin DeLeon.  Although as a good Glassell Park stakeholder, my hometown favorite is Cyndi, I would be proud to support either one of these two candidates in a runoff.

So, do we get lucky and have small d democracy actually work, or do the establishment Dems and Kevin De Leon’s big briefcase of lobbyist money give us more of same.

Stay tuned to this one.