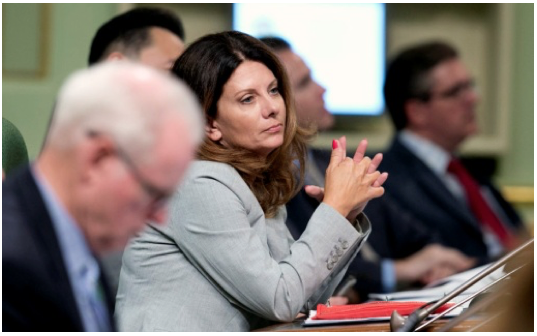 SUPER-MAJORITY HYPOCRISY-You know who doesn’t look so weird anymore? Vice President Mike Pence. When Pence told the Washington Post that he doesn’t dine alone with women, and never, ever attends an event solo if alcohol will be served, many gasped. He seemed like a too-tightly wrapped antihero from Margaret Atwood’s The Handmaid’s Tale.

But that was in ancient America, in March of 2017. Today, in the age of what a Reason magazine reporter calls “Weinsteining,” we know more.

That broad brush “raises a basic question about human relations in the working world,” she wrote in the Los Angeles Times this week:  “Can work and sexuality or romance ever mix? For many supporters of this campaign, the answer seems to be no.”

Among those who said no before it became hip was Mike Pence. But when his perspective was published in the Post, he was ridiculed as a Victorian or worse. For her part, Young concludes “sexual interaction will happen unless the workplace is regulated to a dehumanizing degree and realistically, some unwanted sexual attention will happen as well. As we grapple with these issues, we desperately need nuance.”

Remember nuance? You’ll need some right now – as you read this – to understand why our state lawmakers can’t pass a bill to protect their staff members from sexual harassment of any kind.

Since last month, more than 300 women who have worked in the state capitol have said they too were victims of some sort of sexual harassment. You’d think our state legislature – dominated as it is by a liberal super-majority – would be eager to address the epidemic.

“For four years, Republican Assemblywoman Melissa Melendez of Lake Elsinore (photo above) has introduced a bill to extend whistleblower protection to legislative employees. And for four years, the bill has been buried by the Senate appropriations committee,” CalMatters’ Laurel Rosenthal wrote in September.

“It’s ironic to me that the Legislature passes laws that are very specific to what employers can and can’t do, but doesn’t want to impose the same rules on itself,” said Melendez told Rosenthal in a separate story. “What is that?”

What is that, indeed? Why would a Democratic super-majority annually kill a bill to protect victims of sexual harassment? One explanation might be Reason writer Cathy Young’s – that Democrats in the appropriations subcommittee recognize that government over-regulation of the workplace is its own kind of harassment.

But that’s not how our Democratic majority ultimately explained it. Imagine a world in which Democrats demanded less regulation. Delightful.

Another obvious explanation for the failure to pass Melendez’s measure is that government officials delight in regulating others but generally see themselves as above the law. That’s a nonpartisan, human impulse. Understanding that impulse is behind the genius of democracy – and Lord Acton’s adage that power corrupts.

But acknowledging their own corruption on this issue would be impossible for the state legislature’s super-majority. So instead they have argued – in a state Senate subcommittee – that they cannot extend whistleblower protections to their staff because their staff members are not unionized. Their staff members are hired at will, the state Senate subcommittee said. And where employees are hired at will, they may be fired at will – they cannot be protected. Democratic translation: Where there are no unions, there can be no justice.

It’s an evil response, but (admit it!) somewhat clever for people who owe their political careers to the powerful government unions that keep California corrupt – and broke. Until their staff become union members, the Democrats will offer no protection.

You and I can call that what it is: the government unions’ war on women.

(Will Swaim is president of the California Policy Center where this piece originally appeared). Prepped for CityWatch by Linda Abrams.