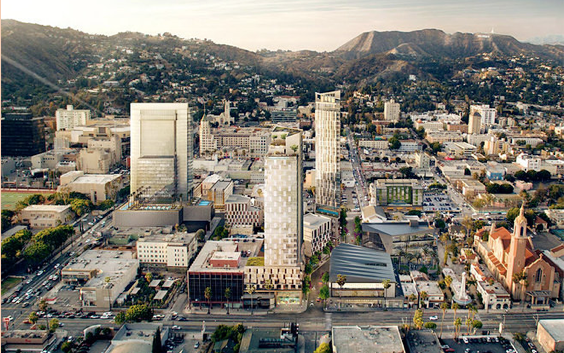 PLATKIN ON PLANNING-When it comes to justifications for big, speculative real estate projects, the big bamboozlers have no limit. But, the bigger their lies, the harder they fall. In this case their lie is the “conventional wisdom” that suburban sprawl leads to extensive driving, so therefore in-fill development reduces driving and is an important step to halt climate change.

Of course, Big Real estate loves this big bamboozle since they so financially benefit from it. And, close behind them are their faithful followers among elected officials, reporters, and academics.

So, what is wrong with their claim? Why doesn’t infill development in Los Angeles reduce carbon emissions, as they argue, and therefore slow down or stop climate change? These are the reasons:

McMansions.  The most common form of in-fill development is McMansions.  There are now many thousands of them in Los Angeles. These are large, boxy houses built on lots where developers swiftly demolished small houses. These boxes are the opposite of energy efficiency. With their double garages and wide driveways at the front of each house, they encourage driving. They are also, on average, three times the size and cost of the smaller homes they replaced. This means that the embedded carbon in the houses they demolish is lost forever, while the energy and resources required to build and maintain the McMansions adds to the city's already large carbon footprint. Furthermore, the new mega-houses have 24/7 heating and air conditioning, as well as heated pools, spas, and large restaurant-quality appliances. In fact, they use so much more energy and resources that that DWP must replace the existing one-inch pipe connecting McMansions to water mains with a two-inch pipe for each new house. Ditto for electricity. The DWP must upgrade local transformers and high voltage wiring to prevent blackouts once neighborhoods mansionize.

High Rise Luxury Buildings. The other most common form of infill housing is new, mixed use high-rise buildings, usually with luxury units. Since most of these structures violate planning and zoning laws, they require discretionary approvals, all of which trigger the California Environmental Quality Act. This infill, in fact, results in most of LA’s Environmental Impact Reports (EIRs). Once completed and submitted, these EIRs all demonstrate that the new projects generate unmitigatable levels of the very Green House Gases responsible for climate change. Contrary to the “common sense” claims of their developers, these projects heavily promote driving, and as a result, cannot possibly mitigate the extra carbon they spew out into the atmosphere.

There is the option, of course, of scaling these projects down since their EIR’s always consider an environmentally superior alternative. But, since the developers “pay to play,” the Los Angeles City Council reflexively approves the most environmental damaging alternatives through unanimously adopted “Statements of Overriding Considerations.” The Council says, in so many words, that Los Angeles can generate extra carbon because the City believes the developers’ claims that their projects create jobs and boost transit ridership. Of course, the City Council never monitors or verifies these claims for a simple reason: there is no evidence to back them up.

Transit Adjacent Development. Another common form of infill development is Transit Oriented Development (TOD). TOD consists of apartment buildings built near transit stations, or in LA, sometimes apartment buildings sited a half-mile from an express bus stop through Transit Priority Areas provisions. While it certainly makes sense to build apartments near transit lines, in Los Angeles the new buildings are market-oriented. Their apartments are expensive, such as $2845 per month for a new, one bedroom apartment  in the Miracle Mile, not far from two new Purple Line subway stations.

While there is always a chance that some of these tenants will take buses or subways, the TOD buildings have large parking structures, and their tenants come from the top 10 to 20 percent of LA’s population in terms of income. This is the least likely demographic group to take transit. Even when these tenants live near a subway or bus stop, they continue to drive their shiny new cars.

In fact, some news reports, like those in Curbed LA, attribute this disconnect between those who live near transit and those who take transit to METRO’s declining bus and subway ridership, down 19 percent since 2013.

Smaller Apartment Buildings. A fourth form of infill is the demolition of small apartment houses to make way for larger R-3 or R-4 buildings. This is happening in many Los Angeles neighborhoods, especially Beverly Grove, where I live. At first, McMansions inundated us, but that flood now includes new, pricey apartment houses, where the Ellis Act is misused to evict existing tenants from rent stabilized apartments.

As for the claim that this type of infill reduces energy use, there is zero evidence. These new expensive structures not only eliminate the embedded carbon in the older and smaller buildings they demolish, but their units also feature the same energy intensive 24/7 heating and cooling of the nearby McMansions. Furthermore, like TOD, the new units are high-priced, excluding the bottom 80 to 90 percent of LA residents from renting or buying.

As a result, Angelinos who are most likely to take transit, the transit dependent, cannot afford these units. Instead, those who are already driving cars will continue to do so once they move in. The result is a higher, not lower carbon footprint compared to the previous, often evicted residents.

By-right development. To be fair, it is possible to build energy efficient infill development -- including Transit Oriented Development -- with a low carbon footprint. To do so, developers should ideally remodel existing structures, or at least build by-right/legal buildings. For example, all of LA’s long commercial transit corridors, such as Olympic, Washington, Western, and Vermont, could legally accommodate new three to five story apartment buildings on every parcel. In Los Angeles, these apartment buildings can be built by-right (without any zoning waivers) on all commercially zoned lots.

This type of residential development on corridors is exactly what the General Plan Framework Element called for, and it is still LA’s preferred type of new residential development. The key, though, is to charge affordable rents so the transit dependent: the poor, the elderly, the handicapped, and those with large families, can afford to move in. This requires substantial public subsidies or direct public construction and operation to build low-carbon-footprint infill housing in Los Angeles.

This, unfortunately, is not the infill development appearing in Los Angeles. What we have, as described above, is just the opposite. In fact, the four most common types of infill projects in Los Angeles increase the city’s cumulative Green House Gas emissions and therefore accelerate climate change.

This is why this particular big bamboozle about climate issues -- that infill housing is inherently sustainable -- does not hold up to scrutiny. Even a quick look reveals it to be just another real estate scam that should be dismissed as a self-serving Big Real Estate fable.

(Dick Platkin is a former Los Angeles city planner who reports on planning and climate issues for CityWatch. He welcomes comments and corrections at [email protected].) Prepped for CityWatch by Linda Abrams.