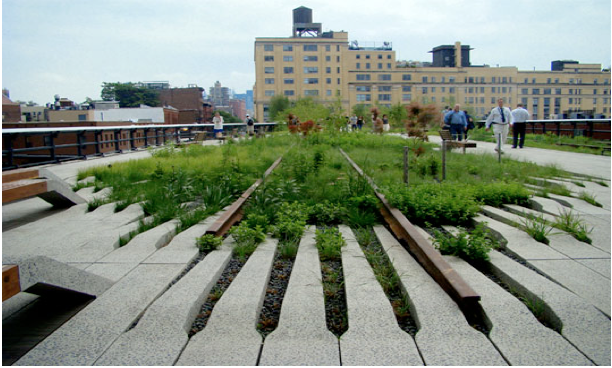 PLATKIN ON PLANNING--From the days of Not Yet New York in the 1980s to the present, some Angelenos consider New York City to be the opposite of their vision for Los Angeles. This is understandable because New York City, especially Manhattan, has much higher density (people) and intensity (buildings) than Los Angeles.

New York City: But, appearances can be deceiving because New York City has the lowest per capita carbon footprint of any major city in the United States. The reasons are no mystery since most people in NYC use mass transit and live in apartments, not houses. But, there is more, and this is the real lesson for Los Angeles, a city whose residents generate nearly twice the amount of Green House Gases per capita as New Yorkers.

As carefully explained by David Owen in Green Metropolis, New York City combines high residential density with high-density commercial, public transit, and other categories of public infrastructure and services, such as parks, schools, and libraries. Unlike Los Angeles, NYC clearly demonstrates how density can (but not necessarily will) address the Green House Gases responsible for global warming and climate change. In contrast, LA's approach: frequent City Council approvals of large and tall buildings where they can only be built through pay-to-play spot zones, is hardly the same.

Even though LA has no shortage of apologists and boosters for poorly located but highly profitable high-rise buildings, such as 8150 Sunset, there is nothing sustainable about this land use decision-making model. In fact, the City Council’s approvals actually make the environment worse. If we look closely at these special ordinances and approvals, they should be accompanied by a sound track of ringing cash registers and wheezing Angelinos. This is because the Council’s spot-zones and spot-plan ordinances are worth many millions to developers, despite the ensuing air pollution.

To truly address climate change, Los Angeles needs to make sure that its updated General Plan stipulates dense public services and infrastructure for all areas where greater density is planned. Furthermore, these dense public services and infrastructure components must be available when new projects are completed. After completion, the projects must then be carefully monitored to confirm that that their Green House Gas mitigation programs actually work.  If not, then the City Council ought to lower the boom on them.

This is why the Los Angeles City Hall status quo model, still soundly championed by many commentators, is and will remain a list of empty environmental promises. All the ballyhoo about randomly located, un-planned high-rise buildings wondrously transforming Los Angeles into a more urban, sustainable, and environmentally friendly city remains hot air. Just as a poorly planned city like Los Angeles spawns dangerous urban heat islands, the hot air from the mega-structures’ boosters and apologists will compound the projects’ adverse environmental impacts.

CEQA: Luckily, we now have the tools and the hard science to confirm these claims. It is the updated California Environmental Quality Act (CEQA). Senate Bill 97 now requires Environmental Impact Reports (EIRs) to measure Green House Gases (largely CO2, water vapor, and methane) in their air quality section. Big surprise, so far the EIRs for LA’s illegal mega-projects, as well as for official plans to facilitate these mega-structures, like the overruled Hollywood Community Plan Update, confirm the obvious. Unlike NYC, LA’s mega-projects will generate unmitigatable levels of Green House Gases. That’s right, the claims that these projects promote a sustainable Los Angeles are demonstrably false.

This is why the Los Angeles City Council always adopts a Statement of Overriding Considerations for these cases. The Council sweeps the projects’ toxic environmentally impacts under a bureaucratic carpet. Then, to make sure the carpet stays put, the Council never requires any subsequent monitoring of individual projects, community plan areas, or the entire city.

If they did proceed with this monitoring, which the General Plan Framework specifies in exacting detail, the thin justifications for their approvals of these otherwise illegal mega-projects would quickly waft into LA’s polluted air.

This monitoring would also blow the cover story from both the Council’s Statements of Overriding Considerations and the endless hot air spewing from tail pipes, 24/7 HVAC, developers, and the mega-project groupies.

This, among many reasons, is why Los Angeles urgently needs to properly update its General Plan, then implement and carefully monitor it.

(Dick Platkin is a former LA city planner who reports on local planning issues in Los Angeles for CityWatch LA. Please send your comments and corrections to [email protected].)