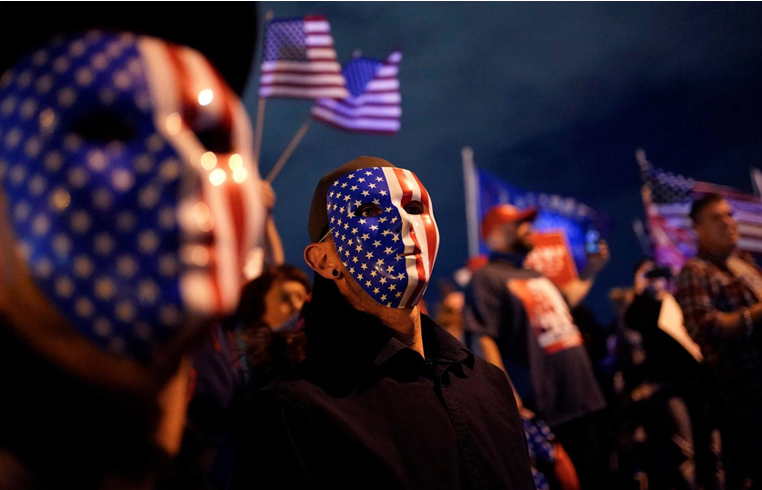 COMMENTARY-In an age of misinformation, we have to be careful of anything that plays into a specific bubble of belief and yet has little or no basis of truth.

Thus, we have seen a little known write up regarding a clandestine meeting on Jan. 5, 2021 by Trump and a select group of his closest supporters and the organizers at his private residence at the Trump International Hotel for the sole purpose of confirmation of the plan for the coup on Jan. 6. As of this writing, no other valid source is reporting this meeting.

The article, written by Seth Abramson and appearing on Substack.com begins with the chilling words of:

In attendance at the large and only recently uncovered meeting, conducted “in the private residence of the President” at his hotel, were, according to Herbster’s account, the following individuals (Note: Donald Trump’s presence at the meeting, either in person or via speakerphone, as yet remains unclear, so his name is temporarily absent from this listing):

According to research by political strategist and regular CNN, MSNBC, The Hill, CBS, and Fox News contributor Cheri Jacobus, Txtwire CEO Daniel Beck claims he was at the January 5 meeting also, and that additional attendees at the gathering included the following three people:

Another comment of clarification should include the fact that Seth Abramson, has a history of credibility; typically finding out information way ahead of the rest of the media. Mr. Abramson is an Attorney, professor, Newsweek columnist, curatorial journalist, and NYT-bestselling author. Seen in/on: CNN, CBS, HBO, BBC, CBC, The Washington Post and others. 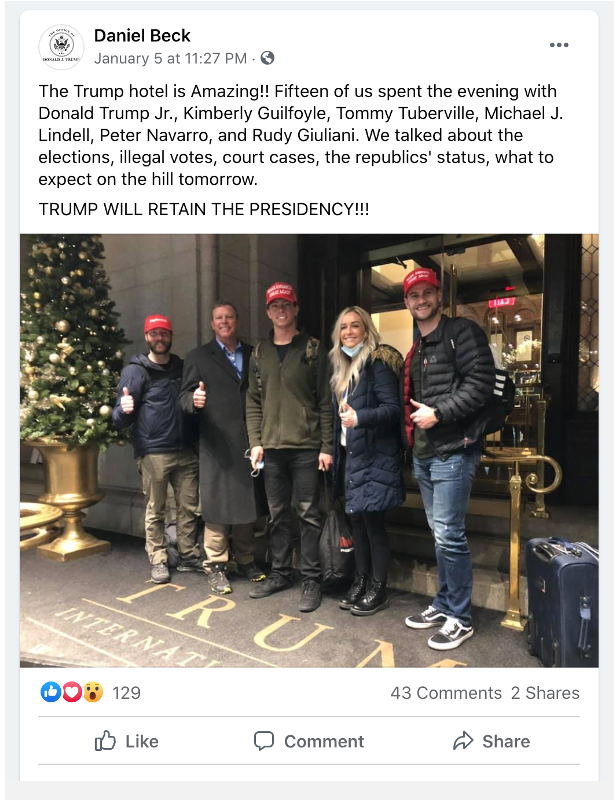 In an article entitled: Trump Appointee put Tuberville at Jan. 5th Meeting at White House Before Editing Post — The edits changed the venue of the Jan. 5 meeting from the White House to Trump’s Hotel 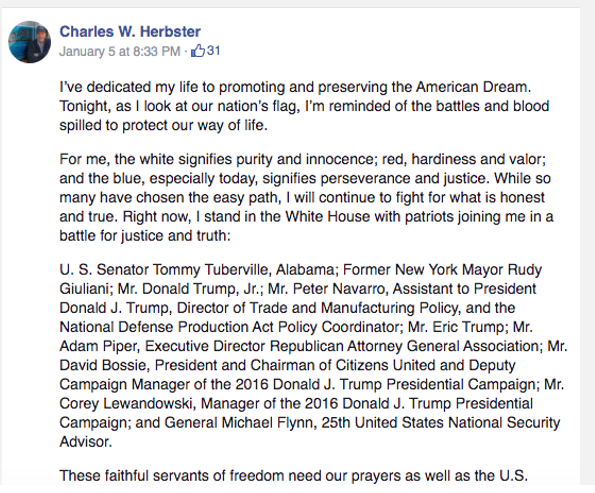 “An appointee of President Donald Trump — on the eve of the deadly attack and attempted insurrection at the U.S. Capitol — posted to his Facebook page that he was in a meeting at the White House with Alabama Sen. Tommy Tuberville, the then-director of the Republican Attorneys General Association, President Donald Trump’s sons and several of Trump’s top advisers, including attorney Rudy Giuliani.

On the morning of Jan. 6, however, the Trump appointee edited that Facebook post to say the meeting took place at the Trump International Hotel in Washington. He also removed mention of Giuliani, according to the edit history of his post, which was still visible Wednesday.

Charles W. Herbster, who was then the national chairman of the Agriculture and Rural Advisory Committee in Trump’s administration, made the Facebook post, which was first reported by journalist Seth Abramson. In the original Facebook post, dated 8:33 p.m. on Jan. 5, Herbster said: ‘Right now, I stand in the White House with the following patriots who are joining me in a battle for justice and truth.’

‘These faithful servants of freedom need our prayers as well as the U.S. Congress. Tomorrow on Capitol Hill, they open sealed electoral voting certificates from each state. This joint session is the last official chance for our members of Congress to object to the widespread voter fraud that happened on November 3. God Bless America, ’he wrote.

Tuberville, through a spokeswoman Tuesday, told APR that he did not attend a Jan. 5 meeting at the Trump International Hotel in Washington.”

It also appears that this was not the first time that some of these attendees have gotten together. The in-depth article produced by Seth Abramson has quite a few images of them all at a variety of situations. One might say that there is nothing uncommon about supporters attending gala events but when you examine the Jan. 5th attendee list you will see that you have Michael Lindell (the pillow guy) that was caught with paperwork about military militia before a meeting with Trump, as well as one of the men involved as organizer of the Jericho March and another that organized the Stop the Steal/March to Save America robocalls.

One of the most revealing comments from Abramson’s article:

“While we cannot know if these co-conspirators discussed the possibility of violence on January 6, that they contemplated the crime that most of the January 6 insurrectionists have now been charged with — Unlawfully Entering a Restricted Building — is all but certain, as is the fact that the purpose of such entries was to put improper pressure on government officials to reverse course on a government action.

In simpler terms, the purpose of the January 5 meeting at the Trump International Hotel in D.C. was arguably seditious conspiracy — as it appears to have been intended to promote and incite criminal acts by a mob whose purpose was to intimidate federal officials engaged in the certification of a democratically elected branch of government.”

Writing this article, I am just the messenger. This is why I have included a lot more “quotes” than I normally would. As time continues, I believe we will be hearing about some of the most vile and disgusting behavior that Trump and his closest allies participated in as an effort to accomplish a complete coup of the American government.

I always offer the advice to all to read all of the information, make sure they are from credible sources, and follow the truth. In this case, reading Seth Abramson’s article in full will be enlightening and make every real American shudder.

(S. Novi is a journalist that worked in the media and continues to seek out truth and integrity. A liberal and one that is suspicious of cults and empty promises. This was posted on Medium.com.) Image Source: rfi; Image Source: Substack; Image Source: Alabama Political Reporter. Prepped for CityWatch by Linda Abrams.