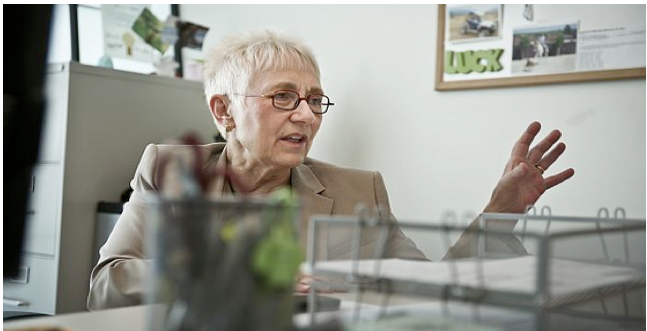 ANIMAL WATCH-A Pit Bull named Sammy with a prior record of repeated aggression and who had just bitten a Los Angeles Animal Services kennel worker in the abdomen, was released on April 28 to NovaStar Rescue, at the personal instruction of LA Animal Services General Manager Brenda Barnette. NovaStar states on its site that it started in 2012, lists only a PO Box address in Ola, Arkansas, and describes itself as “[a] small rescue in Ola, Arkansas. The main focus of NovaStar is to . . . save the pitties, the most loyal yet most misunderstood dogs.”

“Sammy” was the name given to the dog by kennel staff. He was “Sodom” when he was surrendered to the shelter on January 28 by his owner, who reportedly gave the reason that the dog had “tried to bite him.” A behavioral memo that same day by an Animal Care Technician states, “dog growled and snapped move with acd [animal control device] and according to owner dog is a guard dog.”

Sammy was described as a Male, Unaltered, Black and White American Staffordshire Terrier, Age: 5 yrs. Weight: 69 lbs. (Impound #A1608123) on PetHarbor.com, where he was listed for adoption to the public.

During the time Sammy was being offered to a “forever” home, he was chalking up warnings by shelter personnel -- warnings such as: “dog attempted to bite through the kennel when I was lowering the guillotine door on the kennel next to his. be careful when anywhere near this dog;” “this dog is getting worse. lunges at kennel door, growling, barking, biting at door;” “THIS DOG IS VERY AGGRESSIVE. WHEN I GOT NEAR KENNEL DOG LUNGED TOWARDS FACE AND WAS TRYING TO BITE THROUGH KENNEL CAGE. USE CAUTION WHEN HANDLING THIS DOG….”

Then on April 14, the memo reads, “DOG BIT AN ACT. RABIES OBSERVATION.” The rabies observation is a standard procedure required by the County Department of Public Health (DPH) when a dog bite breaks the skin. The dog is quarantined for ten days. (This is mandated whether or not the dog has a current rabies vaccination.)

On April 24, at 4:28 PM, an e-mail from a private g-mail account was sent to Brenda Barnette, stating:

“I am providing you notice prior to the euthanasia of ID number A1608123 [North Central] that he has rescue interest. Pursuant to California Food and Agricultural Code section

“If you do, you will be in direct violation of FEDERAL CODE and will be prosecuted by intent policy and California Animal Networks will press charges.

“Pursuant to section 31108 (b) of the California Food And Agriculture Code:

“(b) Except as provided in Section 17006, any stray dog that is impounded pursuant to this division shall, prior to euthanasia of that animal, be released to a nonprofit, as defined in Section 501(c) (3) of the Internal Revenue Code, animal rescue or adoption organization if requested by the organization prior to the scheduled euthanasia of that animal.

“Paperwork was sent in from NovaStar Rescue placing a hold on this dog. “PLEASE ADVISE.

Will the rescue pick him up Monday? I do not know if this dog is in danger, but you can’t put an indefinite hold on an animal. Please check, I notice that you gave two different “A” numbers.

It is surprising that -- considering the documented history of this dog -- -the GM would release it for adoption, first to the public (before it bit the Animal Care Technician) and then to a ‘rescue.’ Ms. Barnette could have easily determined that the above Fd. & Ag. Section did not apply, because this dog was not a “stray.” Additionally, according to legal experts, there are no federal laws governing this issue.

So, was Brenda unsure of the law, or intimidated by the threats of an individual who does not appear -- nor claim -- to have a formal association with either of the groups she identifies in her email?

Secondly, GM Barnette acknowledged that it was a dangerous animal by requiring under the condition of release, according to reports, that Sammy leave the state and be taken to Arkansas.

Here is the LAMC Section that describes how an animal can be declared dangerous:

(b) Dangerous Animal-Declared. The Department, after a hearing, may declare any dog or other animal to be a dangerous animal whenever it has bitten, attacked or caused injury to any human being or other animal.

Apparently the GM’s order was not taken seriously by the local rescuer, because on May 15, Los Angeles Fire Department and LAPD responded to a small, unkempt older house on White Knoll Drive, Los Angeles 90012, (near downtown LA) at approximately 9 pm, where a pit bull was attacking a woman who “was visiting dog to determine if she wants to adopt from the rescue who had been fostering the dog.” That dog was later identified by LA Animal Services as Impound #1608123, “Sammy.”

The victim was unidentified in the LAFD report, except for the first name, “Melanie,” at a 760-485-XXXX phone number.

“Sammy” was alive but had been stabbed 19 times by a neighbor who heard the victim screaming. He was transported to an emergency clinic, where he was euthanized, according to the County Dept. of Public Health report.

Ironically, on May 16, NovaStar Animal Rescue posted on Facebook:

“For those of you who follow this rescue you probably saw the writing on the wall. Terre has been taking in more dogs than we have been able to place. NOVASTAR IS FULL. We cannot take any more pups. Please help!”

So who is “Tiffany?” Is she a qualified rescuer under LA Animal Services criteria? Did she sign a release form that she was aware that the pit bull had attacked a human, causing bodily harm, and that he had exhibited a pattern of aggressive behavior?

Since he was not transported out of Los Angeles, is the City potentially liable for injuries to the victim?

If Tiffany was designated as a legitimate member of NovaStar Animal Rescue in Arkansas for the purposes of “pulling” Sammy, can that organization or the California Animal Networks, which Tiffany claimed would “press charges” if Sammy was not released, be held legally and/or financially responsible for the attack?

Or is this just a symptom of a greater quandary? There is no state or federal law governing “rescuers.” There is no prior experience or training mandated, nor are there maintenance, health and sanitation requirements for privately housing multiple animals for adoption. There is also no prescribed inspection or monitoring of care and condition of the animals and no mandate for insurance or standards for temperament of animals sold/adopted to the public by rescuers. In California there is no permit or license issued to establish accountability. To become a “rescue,” all that is necessary is a nonprofit tax status, as defined in Section 501(c)(3) of the Internal Revenue Code.

The safety and lives of not only adopters and their families and pets, but also the dedicated people who care for animals in shelters and humane societies -- and the rescuers, themselves -- need to be given more thoughtful consideration. At least five shelter employees at LA Animal Services have reportedly been injured in dog attacks in the last three months, two sustaining possibly permanent damage.

Rescuer Rebecca Carey, 23, was killed in her home in 2012 by dogs she had ‘saved.’ And, an 18-month-old pit bull, named Lily, viciously attacked her adopter and rescuer Patricia Agnello as she was placed in the car with her new “fur mom.” Lily was stabbed-death by a neighbor to save the women.

Although there are highly responsible and competent rescuers all over the country who maintain high standards for both themselves and adopters, there are also those who act on emotion and make poor decisions as to how many animals they can adequately care for and which animals may not be safe to rehome.

Based upon the rapidly increasing number of tragic attacks by adopted dogs (including the April 22 killing of a three-day-old baby in San Diego by a recently adopted Pit Bull,) isn’t it time the CA Food and Agricultural Code that mandates unsafe animals “shall” be released to rescues upon request be reconsidered by California lawmakers?

(Animal activist Phyllis M. Daugherty writes for CityWatch and is a contributing writer to opposingviews.com.  She lives in Los Angeles.) Prepped for CityWatch by Linda Abrams.