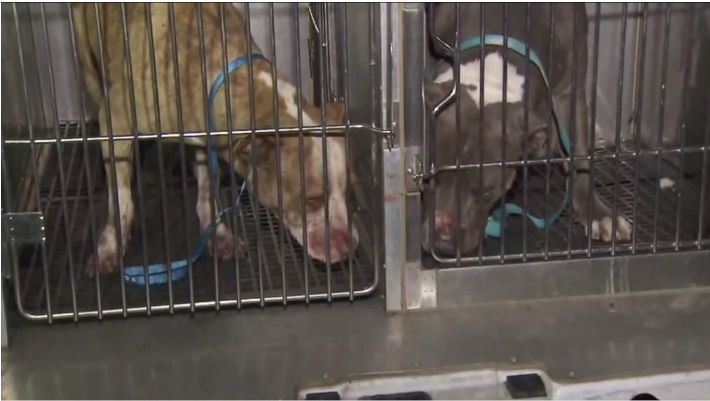 ANIMAL WATCH-GM Brenda Barnette announced at the LA Animal Services’ Commission meeting on March 14, that the two Pit Bulls impounded after the tragic attack which killed Valentin Herrera, 76, and his small dog last month have been euthanized.

Mr. Herrera and his 5-year-old Pomeranian were walking in the 2600 block of Lincoln Park Blvd. near his home on February 2, when two male Pit Bulls which had escaped from a nearby yard grabbed the tiny dog, "shredding his body like a piece of material,” according to a neighbor. An eyewitness said that the owner of the Pit Bulls saw the dogs attacking but took no action to stop them.

When he tried to save his best friend, Mr. Herrera was also attacked, suffering severe injuries to his head and arms.

He underwent surgery but remained in a coma and never regained consciousness. According to a statement by a family member on their GoFundMe page to help with funeral expenses, "...after about 3 weeks of being in the hospital the doctors have told us that his brain is no longer functioning. The family and I have decided to let him go and rest, because we know he has been through so much."

Mr. Herrera died on February 28, just before a scheduled hearing on the attack by the Los Angeles Department of Animal Services on March 1.

Brenda Barnette told the Commission that because the hearing was so emotional for both the victim’s family members who attended and the owner of the Pit Bulls, reporters were allowed in the room but no cameras were permitted inside.

KABC reported that, although the owner of the dogs did not want to be on camera, “at the hearing he said he was on medication at the time and in shock.”

A disabled woman, who claimed she lives on the same property as the owner of the Pit Bulls, previously told KABC  that “the dogs were her ‘security’… against intruders who invaded the yard to steal fruit from its trees.” An earlier report stated that the dogs were not licensed.

Valentin Herrera was a steelworker who came to Los Angeles from Jalisco, Mexico. He purchased the home in Lincoln Heights in 1996. His son, Luis, described his father as a strong, loving man and wonderful father. Mr. Herrera leaves behind his wife of more than 50 years, Anita, children and grandchildren, and a shaken and grieving community.

THE INDIRECT VICTIMS OF DOG ATTACKS

Pit Bull attacks or other severe dog attacks, whether fatal or not, affect far more than the obvious victim. They impact neighbors and others who witness the grisly event or the aftermath. A family is often robbed of a parent, child, spouse, or animal companion. Even if the victims live, they may be permanently grossly disfigured and mentally traumatized -- unable to recover a previous lifestyle or continue a career. If a child is severely injured or killed, future hopes and dreams are lost forever.

Additionally, the family of victim of a dog attack can often suddenly find themselves with overwhelming unexpected veterinary, medical and/or funeral bills.

A prior CityWatch article about the attack on Valentin Herrera cited numerous recent local Pit Bull attacks, but this is not a problem unique to Los Angeles.

Here are just a few of the many attacks reported across the country from December 2016 – March 2017:

On March 16, 2017, a 63-year-old woman underwent surgery after she was attacked by two pit bulls in Pembroke, NC, according to the Red Springs Citizen. Both dogs were euthanized for rabies testing. The woman’s identity and condition were not yet disclosed because the case is also being handled as a “communicable disease investigation."

Early during 2016 a pit bull attacked and killed a Lumberton child, the report said, prompting the city to adopt an ordinance targeting dogs deemed “vicious.” A Pembroke woman lost an arm after being attacked last year by a Pit Bull.

On March 13, 2017, Chris Kazmierczak, 22, was walking to his car with a friend in Bensenville, IL, when he said he heard something running up behind him. "...(I) turned around to see what it was and next thing I know the thing was on my arm," he told WGN-TV. He described the attacking dog as a white Pit Bull, wearing a collar. His friend was finally finally able to kick and pull the dog away, but Kazmierczak will need to undergo rabies treatment if the animal isn't found.

Also, there is a gaping wound on his left arm and about 30 bite marks. Kazmierczak does construction for a living and said he won't be able to work with his hands for at least two months.

Feb 22, 2017- Joliet will hire a part-time police officer whose sole job will be to follow-up on dangerous dog calls. Last year in July the city revealed that they had 11 dangerous dog hearings concerning 17 dog attacks in 7 months. The city admitted that most attacks were committed by pit bulls, but would not give exact numbers. In August, after that city report on dangerous dogs, another serious Pit Bull attack left a woman nearly dead.

So far this year, Yarmouth has seen at least three pit bull attacks on small dogs, one which led to the death of a 3-year-old terrier named Doc….the type of dog known as Pit Bull shows up more in reported attacks across the Cape than any other breed, according to the Cape Cod Times.

Between January 2016 and February 2017, Yarmouth logged 19 Pit Bull bites on dogs and people, according to data from the town's Board of Health. Not included was a recent incident in which a Pit Bull bit its owner, severing the top part of her finger when she tried to break up a fight between it and another Pit Bull, according to Yarmouth Deputy Police Chief Steven Xiarhos.

Across the Cape during the same period, towns reported Pit Bull bites on humans and dogs 58 times. Pit bulls represented 12.6 percent of the breeds listed in the bite reports, but make up only 1.2 percent of the registered dogs on Cape Cod.

On March 11, 2017, police officers shot and killed two Pit Bulls that were mauling a man, according to the NYPost.com.

NYPD reported that multiple officers rushed to an apartment near the corner of Hancock Street and Bushwick Avenue at roughly 10:30 p.m., where they found a 50-year-old man inside being attacked by the two dogs. The injured man, identified by the Post as Paul "Nitty" Davis, was rushed to Kings County Hospital.

The dogs belonged to Devon Dixon, 26, a roommate of Davis, who said he had rescued them from a neighbor's yard after they had been abandoned, the Post notes.  Dixon recalled trying to beat the dogs back with a two-by-four board, but was unable to stop them until police arrived and shot both dogs.

“But they had to, Nitty was losing a lot of blood," he told the Post.

On Sunday, December 4, 2016, a four-year-old boy in Pocatello, Idaho, was attacked by a Pit Bull owned by his mother’s boyfriend, reports KIFI. The mother has custody of the child.

The boy’s father explained that the “…attack damaged two of the boy's facial nerves, which control movements, like smiling. Other wounds damaged the spit glands, the upper lip and below one eye.” Surgery to repair the boy’s face took six and a half hours and more than 1,000 stitches, according to the father. He said the surgeon told him it was one of the worst cases he’d ever seen and they don’t know if his son would ever get back functionally and he will have a big scar.

THE NATIONAL PIT BULL AWARENESS VICTIM page shows the faces and tells the stories of Pit Bull attack victims all over the country. The organization also provides the following statistics that show the increase in attacks:

Pit bull attacks on humans in the U.S. have reached an epidemic level, increasing 773 percent from 2007-2014. In a 30-year study of dog attacks in Canada and the US, 3394 people were attacked by dogs in a fatal and disfiguring manner. 2,113 or 60% of the attacks were by pit bulls and pit bull mixes.

Valentine Herrera is the 508th American killed by a Pit Bull.