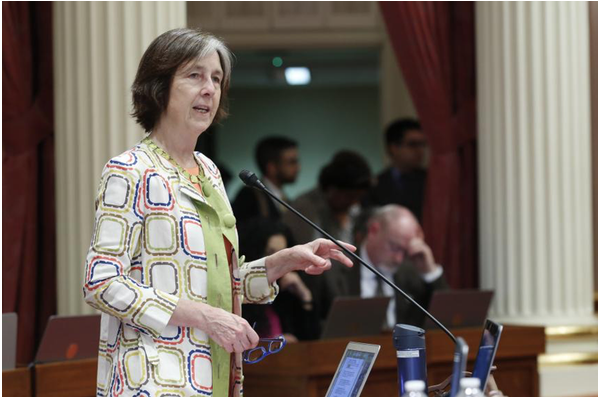 TALKBACK--Unfortunately, this op-ed published on CityWatchLA.com is riddled with false claims about SB 330 by state Sen. Nancy Skinner, D-Berkeley. (Senator Skinner: Photo above.)

Here is a rundown of nine of them:

False claim #1: “Senate Bill 330 would create parcel-by-parcel spot-zoning and up-zoning for the benefit of private developers.  This provision negates a city’s power to adopt a carefully prepared General Plan that lowers density in specific areas, even if it increases overall planned population and housing density.  Such a prohibited General Plan could also provide for future housing needs on transit and commercial corridors, with careful consideration for supporting public services and infrastructure.”

Fact: SB 330 allows cities and counties to downzone specific areas as long as they upzone elsewhere so that there is no net loss in housing capacity.

Here is the exact language:

“(h) This section does not prohibit an affected county or an affected city from changing a land use designation or zoning ordinance to a less intensive use if the city or county concurrently changes the development standards, policies, and conditions applicable to other parcels within the jurisdiction to ensure that there is no net loss in residential capacity.”

Fact: On May 16, the Senate Appropriations Committee amended SB 330 so that it no longer impacts housing fee ordinances, including The Affordable Housing Linkage Fee.

Fact: This ordinance is in line with SB330 and creates more housing, so it would not be pre-empted.

False claim #8: “SB 330 would allow private developers to build whatever they wanted, wherever they wanted, independent of local General Plans, zones, and CEQA-based environmental reviews.”

Fact: SB 330, on p. 45, line 22-30, only removes requirements that a city council or county board of supervisors get voter approval before upzoning or increasing density. Also, multiple references in the bill state that nothing pre-empts CEQA (p. 45, line 14-15 and pg. 46, line 1-4 for example). Nothing in the bill changes CEQA EIR timelines. Local governments still have to approve and deny projects under the bill, according to their general plan and zoning rules, they just can’t downzone unless they upzone elsewhere, and they cannot prohibit or unfairly limit housing projects from coming forward for consideration.

I posted the above list as a comment at the end of the story. But I also thought you should be aware of the numerous falsehoods in the piece.