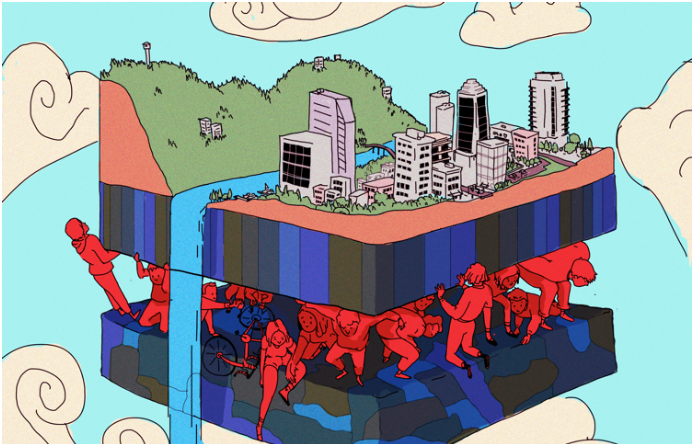 These are the basic four questions to which I will offer some answers, none of which support the claims of Scott Wiener, his real estate industry SB 50 co-authors, and his backers in the media, academia, and mayoral suites.

Q.  Does California have a serious housing crisis?

Q.  Will SB 50 and other statewide and local legislation derived from Ronald Reagan and Bill Clinton era deregulation and trickle-down economics solve the housing crisis.

Q.  If SB 50 and similar proposals won’t work, are there housing alternatives that will work?

Part I.  The California housing crisis, in numbers.

Homelessness in California.  According to the Public Policy Institute of California, in 2018 about 130,000 California were homeless on any given night.  Of these, 70 percent have no shelter at all, such as an emergency bed, car, or RV.   In Los Angeles County the average nightly homeless figure is 55,000 people.  Only 25 percent of this group had some form of shelter, compared to 95 percent in New York City, which also has more homeless people than Los Angeles.

According to Christopher Martin, legislative analyst for Housing California, the difference between the two cities is based on funding.  “The lack of shelters is due to a lack of resources, and we don’t really have a plan to end homelessness.”

Inequality and Rent-gouging in California.  California has the highest poverty rate of any state in the United States, a major reason why 1.7 million low-income California households spend more than half of their income on housing costs, according to CALMatters.   According to Curbed LA the situation in Los Angeles is even worse.  “Renters earning less that then half of LA County’s median income spend 71 percent of their earnings on rent.”  Ben Metcalf, Director of the California Department of Housing and Community Development, noted, “When you’re paying so much for housing, with so little left over, even a minor shock can start a cycle of homelessness.”

Out-migration from California.  Over the past decade, each year about 1,000,000 more Californians left the state than moved here.  Of those who leave, most are lower income families with high school educations, while those moving to California have higher levels of income and education.  High-priced housing leads to out-migration, but does not stop in-migration.

Part II.   What is the relationship between the above numbers and the housing statistics frequently quoted by pro-SB 50 elected officials and the corporate media?  The advocates of supply-side solutions to the housing crisis have presented a range of numbers describing the state’s aggregate housing crisis, but few details on the housing that Californians actually need.

1) The first theory is deregulation, which, in this case, means scaling back zoning, planning, and environmental regulations throughout California.  This deregulation will supposedly spur a tsunami of private investment in new housing.

2) The second theory is supply-and-demand, a misunderstood principle of classical capitalist economics that increasing supply automatically reduces prices.  While this does sometimes happen, this “law” does not apply to California’s housing markets.  This is because of another core economic principle that the supply-siders conveniently forget: the purpose of investment is to maximize profit.  It is not to meet a human need for shelters.  Since the previous data make it abundantly clear that poverty and inequality are at the root of the housing crisis, and because private investors avoid money-losing low-income housing, the Wiener types fall back to a related argument: filtering.  This corollary of supply and demand claims that today’s expensive housing becomes low-income housing through a 25-year process.  The reduced demand for older apartments and houses supposedly decreases their price.

The problem with this theory is a total lack of evidence.  No one can identify any current low-income housing is Los Angeles that was new market housing in 1994.  Through CityWatchLA I have repeatedly asked for the location of any local affordable housing produced by “supply-and-demand” or “filtering”.  After two years, I am still waiting for even one address, and there is no reason to believe that this situation would change under Senate Bill 50.

Like other supply-side housing schemes, SB 50 will not address the state’s enormous, unmet demand for low-income housing.   Owners of vacant market housing will never slash their rents by 75 % to fill them with low-income tenants.  Instead, they will turn to highly lucrative short-term rentals, like Air BnB.

3) The third unproven theory is Transit Oriented Development (TOD).  Since most deregulation of zoning, planning, and environmental laws takes place near mass transit, SB 50 and similar legislation contend that transit-adjacent residents will abandon their cars for buses and subways.  As a result, transit ridership would increase, while traffic congestion and Green House gases would decrease.

As explained by UCLA urban scholar, Michael Storper, in a March 2019 Planning Report interview, Transit Oriented Development is, at best, wishful thinking.  SB 50 and similar supply-side proposals only result in more housing when local market conditions are right.  Selected neighborhoods, where the demand for housing is strong because of local amenities and proximity to jobs, might get more expensive housing, but it displaces existing residents.

In contrast, neighborhoods with few amenities and well paying jobs are skipped over by real estate investors.  In these cases no amount of planning, zoning, and environmental deregulation will attract them.  According to Professor Storper:

“Blanket upzoning doesn’t actually require housing to be created for these (low income) groups. It just allows upzoning itself to be created wherever you want, and for market speculation to dominate. The market will naturally respond best in areas with the greatest returns on upzoning—mostly places with dense, white-collar employment where high-income people will want to live to be closer to their jobs.

This is how blanket upzoning produces the consequence of displacement. Skilled people with high incomes—those who would benefit most from upzoning—are going to move into upzoned neighborhoods and crowd out the middle- and lower-income people who are living there. This displacement is exactly the opposite consequence of what the authors of upzoning bills claim they want to produce.

Also, according to Professor Storper, the core defect of trickle down, deregulation, and Transit Oriented Development theories is that when they manage to produce new housing, it is the wrong type of housing.  In Los Angeles County, for example, 800,000 renters qualify for affordable housing, yet only 300,000 units are available.  The unmet need of 500,000 affordable units will not be met by private investors, no matter how many zoning, planning, and environmental rules are scrapped by S.B. 50 and its local counterparts.

Deregulation through up-zoning allows taller, larger, denser buildings to be built “by right,” but only when developers detect serious profits.  Properties in these areas will then become more valuable, and new owners must recoup expensive land acquisition costs by building expensive apartments.  They will not build the low-income housing that millions of Californians desperately need for a simple economic reason.  It isn’t profitable.

Only affluent renters can afford these new, expensive apartments, and we know that most of them own cars.  In Los Angeles, this group rarely takes mass transit, and this is why existing Los Angeles neighborhoods, like Hollywood, already filled many new TOD apartment buildings, have declining bus and subway ridership.

In addition to changes in Federal tax laws, which currently favor investors, there are many housing programs that can be implemented at the local level.  Some of these are identified on pages 36-40 in the McKinsey Global report, and local Senate Bill 50 critics have also recommended the following programs:

6) Allow Section 8 vouchers to be used for density bonus housing.

9) Compile a data base of surplus government property suitable for apartments.

If California’s elected officials are truly concerned about the State’s housing crisis, they need to look at the actual numbers, and they need to abandon the developer-driven supply-side proposals for programs that have a chance of working.

(Dick Platkin is a former Los Angeles city planner who reports on local planning controversies for CityWatch. He serves on the Board of United Neighborhoods for Los Angeles (UN4LA) and welcomes comments and corrections at [email protected].)