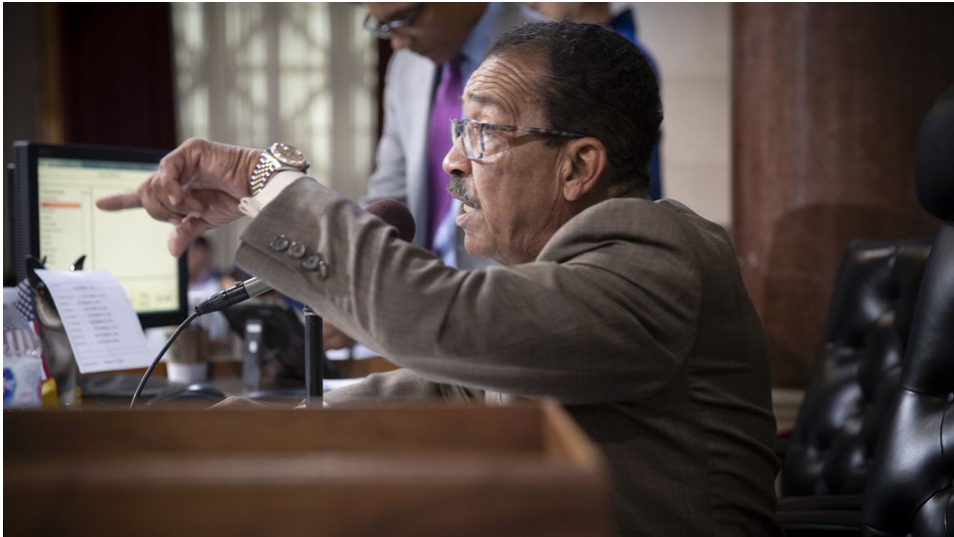 @THE GUSS REPORT-Just when you think a story has reached its conclusion, something remarkable happens.

And this time, the timing was astounding and caught on video.

Last Wednesday, less than 24 hours after the city’s lawmakers passed a law further restricting obnoxious criticism and “disruptive” behavior at their meetings, hundreds of city employees noisily barged into the meeting as Councilmember Mitch Englander made a presentation, stopping the proceeding in its tracks.

Before we go to the video, a few things should be noted.

For weeks, this column has pointed to a series of errors in City Council’s efforts to quell criticism by both frequent and infrequent meeting attendees, including its disingenuous labeling of their comments as disruptive. Those articles are linked at the bottom of today’s column.

Over the course of the summer, the Councilmembers only complained about their critics, but never once publicly addressed what to do about it, shelving their original motion to silence them, even though it was vetted by U.C. Berkeley law school’s Dean Erwin Chemerinsky. (Chemerinsky met with City Attorney Mike Feuer and several Councilmembers only once, but no City Council notes are in the online file. Chemerinsky politely declined to comment on what they discussed, as he considers the city to be his client on this particular issue.)

In the video, take note of the following:

And now the video, which can be fast-forwarded to the 43:25 minute mark when the boisterous disruption takes place.

The motive for the Councilmembers’ discriminatory embrace of these disrupters may be their close relationship as city employees, including their affiliation with union representatives who oversee major campaign cash donations and election-time phone banking efforts. And that may eventually be front-and-center if the anticipated First Amendment legal action against the city winds up back in federal court: content-based discrimination.

When all was said and done, the marauding disrupters, who demanded the return of globe-trotting Los Angeles Mayor Eric Garcetti to newly typhus-ridden Los Angeles for related salary and contractual issues, left the meeting. But Strefan Fauble, the Deputy City Attorney who plays umpire at the meetings, failed to call for the record to reflect – as he does for less-welcome disrupters at all other times – that their exit was just as noisy and prevented the meeting from moving forward. In fact, their exit was so disruptive that Wesson called for a temporary recess until the room was cleared.

Fauble ignored multiple email requests to explain his tolerant response to this incident, as compared to other disruptions.

And it’s just as important to note that during the incident, Wesson and Englander only reprimanded one person: omnipresent gadfly Armando Herman.

So along the path to claiming that it wants to restore order and civility to its meetings, the city’s attorneys, which will likely come from an expensive, private law firm, may have to explain to a federal judge why the Councilmembers and City Attorney’s office bent over backwards to accommodate these disrupters of their meeting, while tenaciously seeking to verbally suffocate all others.

It’s content-based discrimination, and the video does not lie.

My earlier columns on this story are linked below: