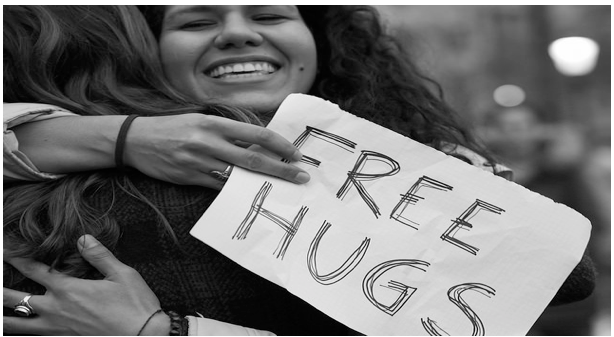 WELLNESS-The United States is a touch-deprived nation. It wasn’t until I first moved to Europe in the 1990’s that I noticed how much more people touched each other in Spain and Italy compared to the US. Even the men and boys would walk arm in arm and kiss each other on the cheeks as a way to both greet someone and to say farewell. The macho culture in the US prevents people, especially men from showing affection to each other which is tied to the violent angry culture we are dealing with today.

In Harry Harlow’s book Love at Goon Park: Harry Harlow and the Science of Affection he uses monkeys to study the affects of love and affection. He creates two fake monkeys both of which are heated from the inside to the same temperature of a real female monkey mother. One of them is created soft and welcoming and the other is made with more wire and is harder and less tender. On the less tender one he adds a bottle of milk for the real baby monkey to drink.

What he found was that even though the harder model had milk attached to it, the baby monkey picked the softer more seemingly affectionate model monkey every time over the wire one. The real monkey would only go over to the wire monkey when he was very hungry. He would drink some milk and go right back to the softer model showing that longer term affection is chosen even over accessible food.

In 2014 Carnegie Mellon performed a study with 404 people to better understand the link between touch deprivation and catching a common cold. The participants were monitored and questioned about their levels of social support and the amount of hugs they got each day for 14 days. On the 15th day they were all exposed to a common cold virus strain and then kept in quarantine in order to monitor them and see who fell ill. The researchers found that the people with greater social support and more frequent hugs got sick less than their touch deprived counterparts. The evidence indicated that the hugging accounted for about 1/3 of the reason they were able to avoid illness. The other 2/3 was perceived strong social support.

Being affectionate with another human being has proven to release the hormone oxytocin, which is made in the hypothalamus of the brain. Besides making us feel great oxytocin is also responsible for healing wounds faster, reducing blood pressure, increasing tolerance for pain, and for stimulating the immune system response to heal illness and prevent us from getting sick.

Sometimes offering a hug to a friend or coworker may feel awkward or inappropriate, and in todays litigious society obsessed with sex and stories of sexual offenses, there is reason to be cautious when offering a hug. Here is a funny and eye-opening article about whether or not to hug people at work.

Studies also find that couples in long-term relationships that have more warm affectionate time together actually live longer and happier than people without affection in their lives. One therapist has his patients that are couples spend 10 minutes a day holding hands and talking about happy times they have shared, usually when they met and fell in love. This has proven effective in repairing and salvaging relationships in challenge.