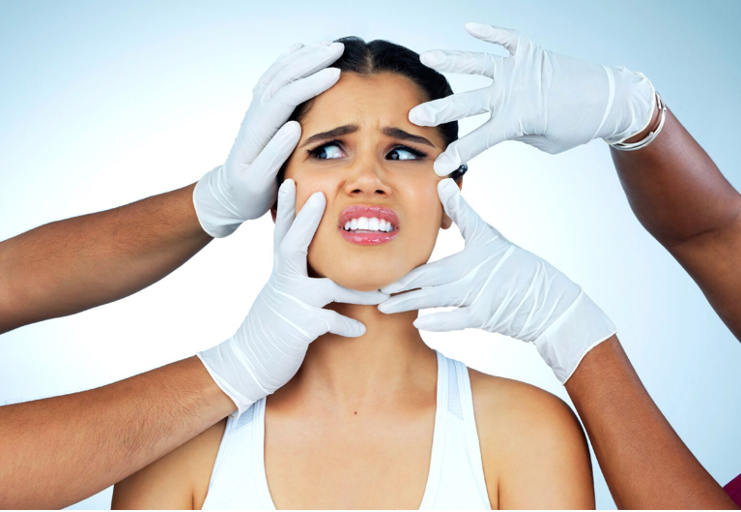 WELLNESS - It is difficult to get a man to understand something, when his salary depends on his not understanding it. ~ Upton Sinclair

Chameleon supermodel Linda Evangelista, whose career has been a work of art, has been brutally disfigured. She disclosed that Coolsculpting is the culprit. This modality uses cold temperatures to freeze and destroy subcutaneous fat cells in attempts to “sculpt” fat deposits that are diet-and-exercise-resistant. Ms. Evangelista says she is unrecognizable, emotionally devastated, and her livelihood was destroyed.

After this heartbreaking announcement against a procedure doctors and a device company profit from, top publications generated articles in reaction. In some articles, plastic surgery “experts” give their spin. But who are the people that seem to be doing reconnaissance for their field? Due to the M.D. after their name, they are folks who get away with normalizing unscientific and risky procedures that remove or destroy fat.

Scientists have classified fat as an important endocrine organ. When liposuction, an invasive procedure, was introduced to the U.S., the cosmetic aspect of fat was targeted; the systemic health impact was ignored. Liposuction, now part of many procedures such as breast reconstruction, leaves the patient with fewer fat cells than nature gave them.

We now know fat has a host of positive functions. Subcutaneous fat, (SubQ fat), the fat you can pinch, secretes hormones that play a beneficial role in metabolism and homeostasis. In numerous animal studies scientists consistently observe that removal of fat from one part of the body subsequently increases fat depots in other parts of the body.

In 2011, a well-done study on humans conducted at the University of Colorado, Denver confirmed that weight redistribution shows up in 100% of the study participants. The phenomenon that causes remaining fat cells to increase in size after liposuction produces an increase in disease-producing visceral fat, regardless of diet and exercise.

Doctors have an affirmative duty to keep up with their field. Why would a doctor risk a person’s life and well being to remove part of a healthy organ? Is this medicine now?

As a patient safety educator, when I read “medical expert,” in an article, I do an online search. I look for complaints, (i.e. Dr. John Doe, complaints), not reviews, because some doctors pay for ‘online reputation management’ to display good write-ups first, whether they are truthful or bought. Reviews may be hidden in a not currently recommended type-status; perhaps the doctor has threatened the consumer with a lawsuit to take their honest review down. To save time, I click the option to show the lowest ratings first.

I also look up the doctor’s lawsuits, which may be found on court or other sites for a small fee; lawsuits may be under a doctor’s DBA or facility name. Most medical malpractice lawsuits don’t even get to court due to tort reform and corruption in the field.

When searching plastic or cosmetic surgeons, if I don’t find reviews about ruined bodies and assertions of cover-ups, I likely haven’t searched hard enough. Patient reviews, medical board records, TV shows, upscale ambulatory centers, doctor referrals, or walls of medical degrees and ribbons from the Mayor do not guarantee a doctor’s expertise or ethics. Institutionalized abuse of power and The White Coat Wall of Silence prevails.

Harmed or surviving parties might be pressured to sign a non-disclosure agreement like the one Linda Evangelista said Zeltiq asked her to sign before covering the cost for liposuction surgery, which was their suggested “fix.” Ms. Evangelista refused to sign the gag and paid for the surgeries herself. The liposuction did not help.

Back in 2013 on a plastic surgery website, numerous consumers left negative reviews or comments about Coolsculpting. In one review a man explains he suffers from Paradoxical Adipose Hyperplasia. He stated that Zeltiq recommended liposuction to fix it. He got liposuction, which not only did not help, but also made him worse.

Often authors of a study sit on the Medical Advisory Board that makes a medical device. It's not surprising they might claim adverse effects are ‘very rare occurrences.’ There are no comprehensive longitudinal and latitudinal studies observing effects of fat destruction or removal, however afflicted consumers leave desperate reviews by the 1000s.

Consumers continue to be misled, while “experts” persist in spinning adverse effects of liposuction et al. as rare, even when science shows differently. Then, recall, victims are often gagged, shamed, blamed, or threatened into silence.

Part of the FDA’s mission is to clear only safe and effective medical devices. The FDA site stated, “Make sure you are willing to take the risks of undergoing liposuction for it’s benefits,” however, they do not share the true risks and outcomes. Additionally, one must wonder, “Who are the FDA influencers - harmed consumers or device companies?”

The Food and Drug Administration is loosening the restrictions on certain cosmetic surgery devices. Powered surgical instruments that re used to reduce the appearance of cellulite's depressions and dimples from people's bodies will no longer require premarket approval under new rules from the FDA. "FDA determined that the device can be classified into class II with the establishment of special controls, in addition to general controls, will provide reasonable assurance of the safety and effectiveness of the device." These cosmetic surgery devices cut away at subcutaneous fat below the skin to improve the appearance of cellulite. Cabochon Aesthetics, a manufacturer of such a device, petitioned the FDA to relax the rules in 2011. The new rules go into effect in 30 days.

“Reasonable assurance of the safety and effectiveness of the device,” says the FDA. Well, scientists prove bad effects from cutting away SubQ fat, and despairing client reviews abound that describe fat tissue deformities, increase in visceral fat, disability, skin adherence to muscle, and much more harm sustained as a result of liposuction.

In a sea of bad reviews, one young woman on a plastic surgery site wrote that a plastic surgeon operated against consent and suctioned below her buttock crease to "define" it, which made her butt drop, long, square, and flat and her stomach is left with dimples and lumps. The surgeon deformed her legs; she has missing parts all over. She was skinny with no fat to transfer, and she’s desperate.

A doctor, an M.D., FAAD, FACMS, who engages on the site responded, “I am so sorry about your results. I see this in my practice at least 1 case per week.”

At least one case per week; you see, doctors are aware of the epidemic harm caused by liposuction and fat altering procedures. It goes beyond negligence, a botched job, or just a few bad doctors. The preventable iatrogenic harm plastic and cosmetic doctors cause to healthy people is intentional, knowing, ignorant, and immoral. Doctors often put people unconscious and violate functional bodies into deformed, disabled, diseased, or dead ones. They misuse wealth and privilege to exert depraved carte blanche over the public.

Lawyers say: board certified plastic surgeons devastate lives all the time, surgeons hide their bad reviews, plastic surgeons cover for each other, judges and juries are biased, and the cases aren’t financially worth it to them due to tort reform and other reasons.

Medically harmed consumers find no help or recourse. There are no surgical assault or medical scam hotlines. State agencies, doctor’s boards, legislators, insurance companies, the media, and more parrot these dead ends: “Go to the medical board, get a lawyer, contact your legislator and change the laws.” But nothing and no one helps.

In September 2021, CBS National News Correspondent Jim Axelrod interviewed TJ Watkins, a public member of the Medical Board of California. Mr. Watkins explained that the medical board always speaks with doctor care in mind. “You never hear patient care, ever. And I mean ever.” He made clear that without a question, the way the medical board functions in the state of California costs patient lives.

Jim Axelrod also interviewed former CA Senator Jerry Hill. Senator Hill said the California Medical Association (CMA) is one of the most powerful special interests we have in California. “They are masters at getting what they want from any legislation.” The Senator explained that the CMA has the ability to bring money to the table, to bring support, which all factors into their ability to control the medical board, and control legislation going forward. The CMA fought Hill on the Patient’s Right to Know Act.

After years of effort, Jerry Hill’s bill finally got passed, albeit watered down. California’s Patient’s Right to Know Act of 2018 (SB1448) requires that patients be informed when their doctor has been placed on administrative probation for any of the following misconduct: Drug or alcohol abuse that results in harm to patients or when the use impairs the ability of the licensee to safely practice medicine.

What consumers do not know is the Medical Board of California throws out valid cases of surgical assault, wrongful death, and more, and many dangerous doctors never even get so much as probation; the FDA is petitioned and influenced by medical device companies; liposuction is a roulette for healthy people and causes negative effects based on the biology of fat. Antiquated tort reform such as the Medical Injury Compensation Reform Act make it so lawyers don’t find medical malpractice cases worth their time.

Who are plastic and cosmetic surgery experts? They may be doctors who ignore science, remove useful parts of a body, do not keep up their field, make money ruining or attempting to fix one person after another, mostly women. Some lie in court for money and to protect one another. Their medical boards are powerful lobbyists who protect doctors, not consumers. This puts everyone at risk, and induces abuse against women.

(Sasha Lauren, author of The Paris Predicament, a novel, and founder of Epiphany Scripts, is a patient safety educator, researcher and activist and CityWatch contributor. She writes about the poorly regulated medical field, bad medical practices, and medical harm. As a licensed massage therapist, she gave over 30,000 hours of therapeutic massage and taught massage, relaxation, and behavioral health skills. Her approach is holistic and preventative. (The information presented in this article is not for personal medical advice or instruction.)