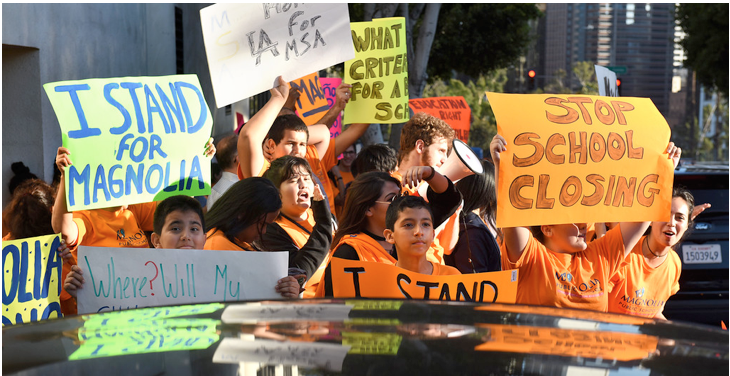 EDUCATION POLITICS-I was at the Los Angeles school board meeting for 10 hours yesterday. I missed the morning session, figuring that since the charter approvals were on the consent calendar, there wasn’t much point. I was right; in one vote, the district lost nearly 6000 students to charter approvals. I guess UTLA made the same calculation because they did not show up either. Four charter revisions or renewals were approved and one new charter got the green light. Eight more charters--including four KIPP--were publicly noticed for hearing next month.

Parent activist Carl Petersen joined me for the last half. All three Magnolia Charters were denied renewal. So they will likely appeal their case to the County, which rarely rejects charters. I don't know what was in the report that was not made public (why?) but even charter champions Monica "Cradle of Reform" Garcia and Ref "Never met a charter I didn't like" Rodriguez voted them down. The report that was public contained a letter from State Superintendent Tom Torlakson telling Magnolia that it was in violation for failing to respond to repeated requests for information.  Still, Caprice Young told a television news reporter that Magnolia had provided everything the state requested, the state gave Magnolia a "clean bill of health" and that she thinks LAUSD just does not want good charter schools.

Citizens of the World charter was approved to expand from elementary to middle school. It is located within three miles of five other LAUSD middle schools. For an introduction to their citizenship, take a look at this 1 minute video clip in which they explain that they're the vibrant vine strangling the dying tree of Stoner Elementary School.

Carl and I were two of only three parents at the board meeting advocating for district schools among nearly 200 people in attendance. Dozens more charter supporters had been bussed and waited outside. That’s what happens when a school is threatened with shut down. I guess when LAUSD starts closing our schools, parents might start showing up to board meetings, too. We shall see. We shall see very soon.

UTLA finally showed up in the form of one person, its president. He did not speak even though "labor partners" are allowed to speak on any agenda item. This plays into the charter lobby's favorite device: the fictional teachers-against-parents narrative, always claiming that it’s just doing what parents want. 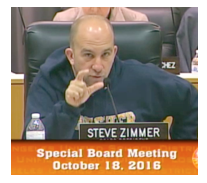 For the evening session, we parents were only allowed one public comment for the entire meeting even though there were nine agenda items. Carl focused on details of El Camino and the harassment he has been subjected to since blogging about them. There was a collective, audible cringe from El Camino supporters when he approached the podium.

I implored the board to stand up for neighborhood schools and reminded them that they were our only hope because the CCSA has the governor on speed dial. That comment might be why the CCSA started following me on Twitter last night.

One charter dad told the board that it should not oversee charters due to its "implicit bias" on account of the district competing with charters for tax payer dollars. But, he said, don't worry. We're going to get the law changed. In the meantime, here's a great NPR story for that dad to find out what implicit bias really is.

Here is Howard Blume’s report. I’m sure KPCC will have one later today. LA School Report will have several. That’s what they do to influence opinion. They tell the charter story over and over until people believe it.

(Karen Wolfe is a public school parent, the Executive Director of PS Connect and an occasional contributor to CityWatch.) Prepped for CityWatch by Linda Abrams.