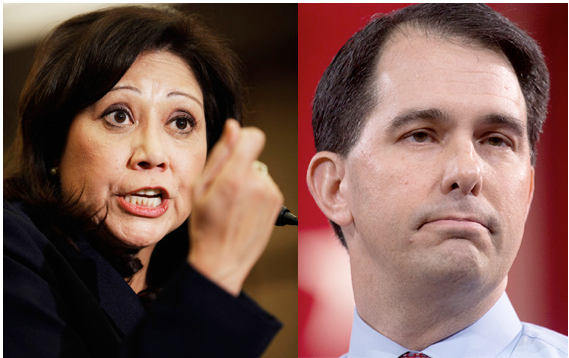 POLITICAL TONGUE IN CHEEK--Congratulations to LA County Supervisor Hilda Solis and Wisconsin Governor Scott Walker for winning this year’s “Strange Political Bedfellows Prize,” in recognition by us of their “shared policy of putting the interests of billionaire hedge fund manager Wesley Edens above the interests of working class families and the rest of the public.”

It’s an impressive win, given that Solis and Walker have been ideological arch enemies since at least 2012, when Solis, as U.S. Labor Secretary, supported the effort to recall Governor Walker for stripping away the collective bargaining rights of state employees. (Walker survived the recall attempt.)

Scott Walker’s boosting of Wesley Edens at the expense of taxpayers is old news; without Walker, Edens could have never extracted $250 million from Wisconsin taxpayers to subsidize a new arena for the Edens-owned Milwaukee Bucks. (Mr. Edens’ business partner Jon Hammes was Mr. Walker’s national finance co-chairman during the Governor’s failed bid for the Presidency.)

As for Hilda Solis, she has provided Mr. Edens the greatest gift of all. More than a month ago, on July 15, Mr. Edens was exposed on the front page of the New York Times  for having pulled a bait-and-switch of unprecedented scale on the LA County Board of Supervisors (as well on the elected officials of New York City, Ventura County, and San Dimas, California.)

Like a wealthy kid getting into college by having someone take the SATs for him, Edens secured LA County golf course concessions worth tens of millions of dollars by having a qualified company (Fortress Investment Group LLC) go through the County vetting process for an unqualified company (Newcastle Investment Corp), with the result being that Newcastle, unbeknownst to the County, ended up with the contracts. A company called the American Golf Corporation carries out the work for Newcastle.

In response to all this fraud, Supervisor Solis, the Board’s Chair and “ranking advocate” for working class families, has done nothing to stick up for Angelenos – and has, in fact, done nothing but bend over backwards to look away from the crime. Why?

Far from being a victimless crime, the fraud has turned LA County into a place where only by lying can parents tell their children that working hard and playing by the rules can lead to success. It has driven working class and family-owned golf operators (as well as golf-pros who teach lessons to make ends meet) out of business. It is a fraud that has cost this “park-poor” County to lose revenues (through predatory pricing which has decimated revenue the County used to receive from non-Edens-controlled County golf courses.) It has turned recreational spaces owned by the public into monetized “gym-like” membership clubs with punitive cancellation policies.

It is a fraud whose scale dwarfs the offenses for which the 13 companies on the County’s list of debarred contractors were banned. And the malfeasance continues -- including punitive actions by OSHA and by the Air Pollution Board (to whom American Golf pleaded financial hardship.)

And yet Mr. Edens has still not apologized to the County, choosing instead to deny facts that are self-evident. Not a single document presented to any of the municipalities involved with the fraud included the name of the company actually acquiring the contracts, and yet Mr. Edens, rather than conceding the point, gave the New York Times a print-out of a single email containing the company’s name, with the claim that the email was sent to an LA County employee. The County refutes that claim, saying they never received the message.

Where is Hilda Solis in all this? As the Board of Supervisors Chair (and former Secretary of Labor), she owes it to working class families and the rest of the public to defend Los Angeles. It’s not an enviable challenge, but it’s a fight that she is uniquely qualified for.

In the next two weeks, as Labor Day approaches, the names of great labor and civil rights leaders will inevitably be invoked. And so here’s a question for Supervisor Solis: Would any one of those leaders respond to this situation by doing nothing?