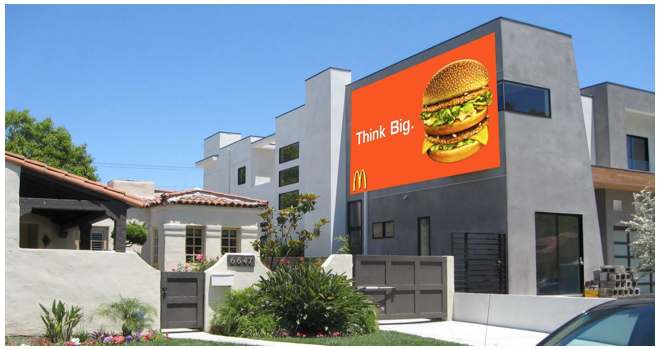 Apparently City Planning only got the first part of this message because through many months of ordinance preparation, they have gradually reverted to their tried and true model, gradually slip in mansionization loopholes, whether bonuses or exemptions advanced by real estate developers, even when opposed by nearly all neighborhood residents and organizations.

As this showdown over the fate of LA’s neighborhoods comes closer, we can learn about the day-to-day realities of mansionization in Los Angeles, including repeated claims and the counterclaims, by examining the Beverly Grove Residential Floor Area District (RFA).  It is now nearly three two years old, and it contains, by the far, the toughest anti-mansionization provisions in Los Angeles, aside from Historical Perseveration Overlay Zones and several residential Specific Plans.

These so-called design features were nothing more than loopholes that allowed developers to increase the size of houses by 42 percent through secret ministerial decisions conducted by the Department of Building and Safety (LADBS). To this day, in fact, no one knows what loopholes LADBS used to approve building permits for the thousands of McMansions built in Los Angeles over the past decade.

The mansionizers claimed the RFA would reduce property values, but, like other RFA’ and HPOZs, local Beverly Grove home values have soared over the past three years. The only trend that can be observed is that houses next to Beverly Grove’s 75 McMansions have not appreciated at the same rate.

The mansionizers claimed that real estate activity would stall in the Beverly Grove neighborhood, but the same realtors are still hard at work with the same door knocking, mailers, flyers, and ads. They still are shilling with form letters designed to look like hand-written notes from people who claim they want to move into the neighborhood and desperately want to buy a house.

The mansionizers’ claim that McMansions are built by local residents who need more space has also been shown to be bogus. All of the Beverly Grove McMansions are spec houses, and no local resident demolished their house, moved into a rental property for a one or two years, built a McMansion on the suddenly empty lots, and then moved back to the neighborhood. Instead, the local residents who sold out to the mansionizers sheepishly disappeared, probably loading up moving vans with their prized possessions in the dark of cold and windy nights.

Finally, the mansionizers often repeated claim that they are only building to meet a market demand has also not held up. The McMansions sell more frequently than older houses, and often sit vacant for many months with for sale signs. In some cases, the lack of demand caused builders to move into their empty houses, and in other cases turn them into party houses or short-term rentals.

The real upshot of these lessons in that local campaigns against mansionization must charge on for years and be continually, but not arrogantly, in the face of elected officials and City Planning staff.

A second conclusion is that the repeated claims of mansionizers are nothing more than self-serving hot air. They constantly make the same bogus Chicken Little opinions, no matter how many times they are rebutted by opponents, or, in the current case, by empirical reality. They nevertheless plod on in the hopes they can eke out a few more spec houses before a new, effective mansionization ordinance finally puts the kibosh on their slimy business model.

Finally, a third conclusion is that any decisions to add size and bulk to a house beyond what is allowed by-right, must not be a ministerial LADBS decision, but must go through City Planning as a discretionary action.

(Dick Platkin writes on Los Angeles city planning issues for CityWatch. He lives in Beverly Grove, and is a Board Member of the Beverly Wilshire Homes Association. Please send any comments or corrections to [email protected]) Prepped for CityWatch by Linda Abrams.