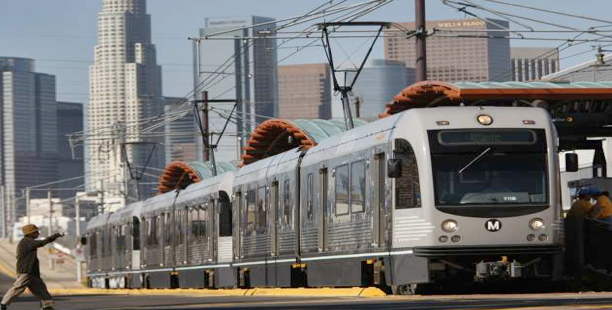 TRANSPORTATION POLITICS--I was impressed (and a little saddened) over the past few months with both the optimism and the disappointment being generated by the opening of the Exposition Light Rail Line to Santa Monica.

There is, overall, an excitement that enhanced mobility and alternative commuting now exists in the Westside, but the lack of parking and access to the Line, coupled with the perception of overdevelopment that might even be enabled by the Line, raises all sorts of concerns and cynicism as well.

In my last CityWatch article, where I raised the alarm over the insulting and woefully insufficient City of LA's sidewalk "fix", there has been a remarkable consensus among my grassroots colleagues that this "fix" has really hurt the cred that the City needs more than ever.

Enter the upcoming November countywide transportation tax initiative, and the unresolved and even worsening budgetary problems that the City of LA has, that leaves us with the following key points that will be critical for the transportation efforts of ten years ago to continue this November and for years to come:

1) Credibility is key, and transparency is key.  Lose them, and you've lost the voters/taxpayers of the City and County of LA.

The 2008 Measure R countywide sales tax was as credible and transparent as any tax initiative I have ever seen in my life.  We were told what we were going to get with that money, and it was fairly straightforward to learn which city and project would be funded by a given amount of money.

"Measure R-2", as this November measure is being called by its backers, must do the same.  Overall, it has created the same sense of transparency as its predecessor by its backers, but questions to the broader electorate still remains.  What are the freeway/road projects that will be expedited by the November measure...or is it all rail projects?  And which projects will be prioritized first?

For those of us who know the difference between Measure R-2 and what a Metro Long Range Transportation Plan is, that's an easy question to answer:  funding and prioritization of projects (and the .awarding of project planning and construction to contractors) are different things.  But we can do better in explaining that to taxpayers and community leaders who aren't transportation wonks.

And while we're on the subject of transparency and credibility, let's underline a key point that Friends4Expo Transit leaders learned quickly:  the Expo Line CANNOT be promised to reduce traffic--it can only offer commuters another alternative to getting to where they want to go.  The same can and should always be said for other rail lines.

2) The inefficient, if not downright corrupt, politics of the City of LA is undermining the credibility of the County's transportation efforts.

It's not worth dragging old issues into the weeds, but it is worth mentioning that the City and County of LA are two separate levels of government...and is a reality that by far too many Angelenos and other County residents don't get.  Ask a City resident who their "supe" is, and he/she might tell you that he/she prefers salads to soups.  Ask a resident of a South Bay or Southeast LA County City who their mayor is, and he/she might respond that it's Eric Garcetti.

So the best thing that local (and big) cities can do is to make sure that their city's transportation needs will be met.  As a Long Beach kid who now lives in LA, I understand and respect different perspectives within our county...and in our City of LA, it's the sidewalk fix (some stretches done in 2 years, some in 5 years, but the whole enchilada in 10 years) that has to be funded and lionized by any Measure R-2.

Furthermore, the need for Planning and developers to create projects that are truly legal (yes, following environmental and engineering laws aren't just an old-fashioned fad, but it's supposed to be mandatory), and to fund transportation impacts that big (and even small) projects create, will be necessary to avoid souring tax-weary voters this November.

It's not perfect, but the Bundy/Olympic development planned for the current Martin Cadillac site is an example of both good will on the part of its developers (compared to Mr. Alan Casden, they're angels), and the demands of Mike Bonin and the CD11 office to derive a project that's truly transit-oriented, has affordable housing, and has transportation mitigation efforts funded to improve the community.  It's still too darned big for many local residents, but at least Mike Bonin "gets it" with respect to credibility and transparency.

But does Herb Wesson and the rest of the LA City Council "get it" with respect to credibility and transparency?

3) Not all development has to be on the Westside and West Valley--and suburban work/home commutes need to be reduced for the betterment of all LA County residents.

Issues raised by those promoting the Neighborhood Integrity Initiative--which has its core paradigms the insistence that the City of LA follow its own laws with regards to Planning and Development--include the big question of why there isn't more development south of the I-10 freeway.  After all, if Downtown LA is undergoing a housing and business renaissance, then why can't South LA?

Similarly, why shouldn't LA City, as well as the San Gabriel Valley, take advantage of the Foothill Gold Line to create more jobs and transit-oriented development along its major new commercial/residential corridor?  Do all jobs need to be within LA City limits? Can't rail commuting allow suburban commuters better new options if they do work within LA City limits?

When the planned Metro Rail/LAX People Mover connects LAX to the countywide rail system, the unfinished Green Line segments in the South Bay and Norwalk will be potentially explosive new regions that want "in" to the Metro Rail network.

So not only should City Planning recognize the need to avoid undermining transportation efforts with unsustainable overdevelopment, but we all need to recognize that trying to cram or redo more housing/development in the Westside and other congested regions is the same as rotating chairs on a sinking Titanic.  There is a LIMIT to what we can build in certain overbuilt portions of the City...so the need to develop south of the I-10 and outside City limits is immediate and mandatory.

Funding and construction efforts come in cycles and waves, and it's possible that the desire for more transportation initiatives is very different than what it was ten years ago. Yet the opportunity very much exists if both hope and credibility are adhered to by those truly seeking transportation/mobility enhancements as a vehicle to improve all of our lives...and by those willing to really do what it takes to sell that hope and credibility to their fellow LA City and County taxpayers.