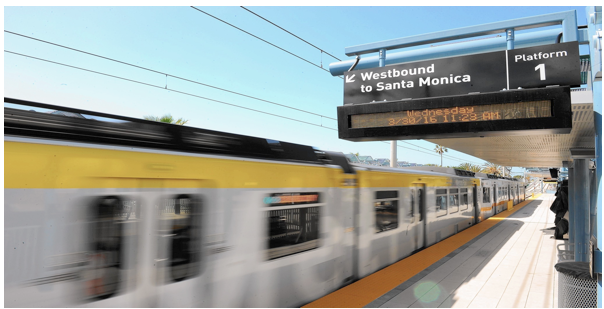 MILESTONES AND GRATITUDE--After 15 years of transportation advocacy--and, in particular, for the creation of a modern Southern California rapid transit system--there are times when nothing but "Thank You!" comes to mind.  With the arrival of the Expo Line for operational service to the Westside, this long-overdue light rail has been the result of years of struggle and sacrifice.  To all those who deserve it (and might or might not hear it), Thank You!

To my wife and teenage son, the biggest Thank You of all is needed.  How many nights, weekends, and daytime meetings were needed for the leadership of Friends4Expo (who were, are, and always will be, truly my friends) to get the Board of Supervisors, and Mayor of LA, and state/federal reps, and the many neighborhood associations, to come together to support this line?

For any sacrifices involved with having your husband, or your dad, missing in action at "some meeting"...Thank You.  And for my little girl--who was either not yet born, or too young, when the real battles for the Expo Line was fought)--who asked me a few months ago, "Daddy, I heard you had something to do with the Expo Line...right?" I hope my thanks to you as well will always be remembered.

To a large degree, I'd like to think that the Expo Line was fought by so many Westside and Mid-City private citizens because (for those who remember the LA riots and racial unrest of the 1990's) they wanted a better future for their families, for their neighbors, and for their city and county...and maybe make a small difference for others to emulate to make LA County a world-class city.

So, a big Thank You! is needed for Darrell Clarke, Kathy and Jim Seal, Julia Maher, Faith and Presley Burroughs, Bob Cheeseboro, Jonathan Weiss, the late Ken Ruben, Cathy Flanigan, Bart Reed and Roger Rudick.  If I forgot to mention any others in the central Friends4Expo leadership community, than my apologies.  You taught me a lot, and I thank you for putting up with me as I did what I could to bring West LA on board with Expo.

And similarly, the neighborhood associations, the LA Neighborhood Councils, the nonprofit groups of Culver City and Santa Monica also deserve a big Thank You!  Ditto for the Crenshaw/Mid-City groups who--like the Westside--had to put up with and get past the grandstanders, the race-baiters, the racists, the elitists, and the opportunists to make the no-brainer-of-a-line become a reality.

Thank You! also to those heroes of Metro who hung out with us during the years when no one would touch us with a ten-foot pole--in particular, David Mieger and Tony Loui.  Metro really is an example of "government that listens to, and works with, its constituents"...so don't go blaming them if their political bosses screw up.

Thank You! To those many government officials and politicians that Friends4Expo (of which I was certainly one of the loudest and most pushy advocates) kept nagging to do the right thing.  Some of you jumped on board right away, and some of you had to be dragged...but it's clear that this was the right thing to do--including those who got into power opposing the line, and then changing their mind when it was obvious something had to change.

Among those who particularly deserve our thanks are Councilmember Mike Bonin (and his predecessor, the late Bill Rosendahl), House Rep. Ted Lieu, and a host of politicians who now support, and not vigorously fight, for improved transportation as part of our normal budget/operations at a local and federal level.  Thank You!

Perhaps yet another Thank You! goes to the supportive Mar Vista Community Council and Westside Village Homeowners Association, to say nothing of the CD11 Transportation Advisory Committee, who played key and critical roles in the routing and features of the line.  The innumerable motions and meetings clearly were a series of group efforts.  I can only hope you all realize how grateful I am to you all.

And to those Friends of the Green Line, a group formed along the lines of the Friends4Expo Transit, which began the increasingly loud advocacy to FINALLY finish the LAX/Metro connection...Thank You!  Bob Leabow, Matthew Hetz, Kent Strumpell, Daniel Walker, Alan Weeks, and a host of other heroes and thought leaders also taught me and the region so much.

And for those who aren't here to celebrate (the late Bill Rosendahl and Ken Ruben come to mind), I'm hoping you died knowing this would happen...and if there's a Heaven then I'm sure there's celebration for all your exhaustive efforts there, too.  Thank You!

Finally, for all those friends and family I might have lost touch with while working with so many wonderful people these last 1-2 decades...Thank You! and Sorry!  I hope you can forgive me.  No, I never forgot you--each and every one of you from school, college, work, etc. who I used to hang out with but got caught up with this noble endeavor to advocate for the Expo Line and for greater transportation/planning, in general.

But...I won't be attending the celebrations this weekend, I'm afraid.  I am taking a day off to teach dermatology to middle students all day Friday, and will be with my son's awesome Boy Scout troop backpacking this weekend. These commitments are as important to me (particularly devoting my life to my family) as was the Expo Line effort which took over my life in 2000-2010, and still does, to some degree.

To conclude, this piece is really NOT about me (it probably looks that way, but it's NOT).  Think about all the names mentioned here.  Think about your neighborhood association, neighborhood council, non-profit grassroots advocacy group, or other selfless leaders who throw their time, money, and even health at goals that are so much bigger than themselves, and never get thanked.

So perhaps a Thank You! is in order for that next dogged, devoted, and dedicated volunteer who strives to do something greater than him/herself, and really leave something better for future generations.

Because one person can, and does, make a difference by being FOR something.  And maybe that one person is YOU.