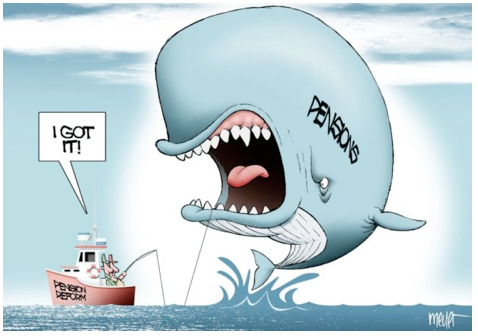 PERSPECTIVE-As I pointed out in Monday’s edition of CityWatch, the City of Los Angeles booked a $7.6 billion adjustment to recognize the unfunded pension liability owed to the beneficiaries of its public pension programs. It is an admission that the residents and stakeholders of the city are on the hook for very generous retirement benefits offered to municipal employees. For the record, the adjustment does not cover exposure to virtually free health benefits.

Anyone who follows the city’s finances expected this. All of our elected officials have been expecting this.

I got around to reading the Comprehensive Annual Financial Report, which was issued on February 5, on last Saturday, February 27. I wrote and published my article about the very significant adjustment on February 28. Citywatch picked it up on the 29th….and still beat the city’s press release by a day! I thought I was slow.

It is common -- in the interest of transparency – to disclose material adjustments to an entity’s financial position in sufficient detail to stakeholders, whether they are shareholders, investors or, in the case of a governmental unit, taxpayers and others who pay fees for public services. Such disclosures should be timely, too. Almost a full month after the financial statements were released is not timely.

However, worse than the poor timeliness, was the lack of sufficient detail.

The nature of the disclosure was, simply, that it was mandatory. The Governmental Accounting Standards Board (GASB) issued pronouncement 68 requiring that unfunded pension liabilities be included in the face of the financial statements, identified as Net Pension Liability. The statements, cover letter and subsequent, but late, press release did not offer any explanation as to why GASB issued the new reporting requirement – the fact that it was necessary to emphasize the impact defined benefit plans had on governments’ long-term resources.

Furthermore, the treatment on the financial statements is still not as transparent as it should be.

According to a white paper issued by California Committee on Municipal Accounting, (a joint committee comprised of representatives of the League of California Cities and the California Society of Certified Public Accountants) the Unfunded Pension Liabilities will become a new liability on the Statement of Net Position, appropriately named “Net Pension Liability.”

I challenge anyone to find a line in the CAFR’s Statement of Financial Position that states “Net Pension Liability.” Instead, you will find “Non-Current Liabilities due in more than one year.”

Only if you compared that line with last year’s CAFR could you determine the impact on the liabilities. So, the most significant, long-term liability is buried. You must dig much further by diving into the notes to get a sense of what occurred – and that is simply what GASB 68 was trying to avoid.

As I mentioned, the press release is short on details. But it also obfuscates the result by aggregating the impact on a city-wide basis instead of the operating segments.

If you break it out by segments, the Government Activities segment took the brunt of the adjustment, putting its equity in negative territory. This is the segment responsible for core services residents depend on for quality of life. It includes public safety, recreation and transportation, among others.

Nowhere is there a discussion of how the Net Pension Liability is likely to grow. City contributions to retirement plans as a percentage of payroll has been growing steadily (see my previous article). That is a reflection of the increasing burden the retirement plans are having on the budget.

Ron Galperin is the best controller Los Angeles has ever had – by far.

If the city elections were held tomorrow, he would have my vote.

However, this all demonstrates how strong of an influence politics has on the Office of Controller. No one wants to risk raising awareness over this controversial and costly problem, because doing so could create tensions with the powerful public unions that many of our elected officials depend on for their re-election campaigns.

Galperin may not be a beneficiary of such support, but he must work with city officials who are.

(Paul Hatfield is a CPA and serves as President of the Valley Village Homeowners Association. He blogs at Village to Village and contributes to CityWatch. The views presented are those of Mr. Hatfield and his alone and do not represent the opinions of Valley Village Homeowners Association or CityWatch. He can be reached at: [email protected]) Edited for CityWatch by Linda Abrams.