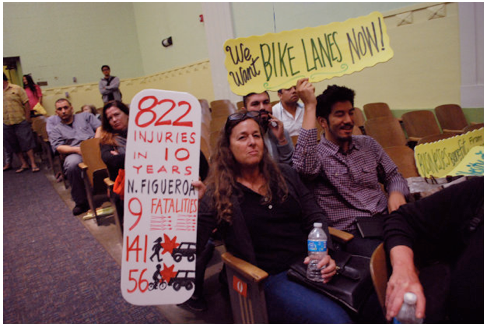 EASTSIDER-A recent spate of CityWatch articles disinterring the Bicycle Plan controversy and the sins of Council District 1’s Gilbert Cedillo prompted my attention. There have been nine CityWatch pieces since last August, culminating in the most recent post, “What to Do about Gil Cedillo...Carpetbagger-in-Chief.”

Back in 2014, the debate between the bicycle folks and everyone else came front and center in Northeast LA with the wrangling over the LADOT Bike Lane Plan for Northeast LA that affected mostly the areas around York Blvd and Figueroa Street. Impacted communities included Highland Park, Mt. Washington, Cypress Park, and Glassell Park.

A series of three meetings led to the Council office halting the project. The first was at Nightingale Middle School on May 8, 2014; the second at the Highland Park Neighborhood Council on June 5, 2015; and the third at Franklin High on June 12, 2015, sponsored by CD1.

I got involved after my friend Caroline Aguirre went to the Nightingale School meeting and wound up writing a letter to the LA City Attorney regarding an LADOT video that showed light traffic on Figueroa, a positive-seeming thing for bike lane proponents. She believed this was bogus. That LADOT video was directly contradicted by another one shot by an Occidental College Senior. That video showed heavy traffic – a bad thing for the bike lane proponents, calling into question the validity of the LADOT video shot by their staff.

The resulting dispute over “video evidence” made for a very contentious meeting. I’ve been told by the folks who were there at Nightingale that it was more of a food fight than a reasoned discussion.

I personally attended the other two meetings. The Highland Park NC meeting was critical: bike-lane proponents had managed to run for election, replacing sitting board members. And the bike people were now in the majority (democracy-in-action.) The final meeting, sponsored by CD1, was a full affair in the Franklin High auditorium and it saw a vote to support reversing the course of action taken earlier against the plan.

These 2014 meetings were ugly -- somewhere between the Jerry Springer Show and a really bad hair day meeting of the Echo Park Neighborhood Council. For example, at the Highland Park NC meeting, they voted to cancel advertising in the Boulevard Sentinel (our local newspaper) on the grounds that the editor, Tom Topping, was anti-bike. There were a number of comments casting aspersions on his person and character. Public comments were simply a litany of “pro” and “anti” sentiments regarding bike-lane people. And there was virtually no discussion on the merits of the plan before the NC reversed its position.

The same pattern was true at Franklin High. Pro bike-lane folks were out in front of the school, handing out documents and slogans, looking to guarantee that they could out-shout any contrary points-of-view. Allegedly, the Council office had drummed up support to counter the pro bike-lane people, although I cannot personally attest to that claim. Needless to say, the event did not end well. And ultimately, Cedillo shut down the plan, despite being tagged by detractors as “Roadkill Gil.”

Lost in all of this was any pretense of civil discourse or an attempt to rationally decide what was best for the communities involved. And that’s the point of this story: solutions have been sadly lacking in all of this to and fro.

It may be, as Richard Risemberg writes, that the only solution is to get rid of Cedillo and replace him with one of the loudest and least civil pro bike-lane supporters, Josef Bray-Ali. Personally, I don’t know how successful the attempt to dethrone Cedillo would be and, even that were to occur, I really don’t know if it would produce peace in our communities.

Do not misunderstand. Mr. Cedillo and I have not been on the same side of any PLUM Committee vote, especially with its obsequious bowings to the LA developer class and willingness to trash our communities, littering us with Council waivers. As with his predecessors and the current PLUM committee chair, Jose Huizar, they never met a developer (or billboard company) that they didn’t love.

However, lost in all this fighting is what doesn’t appear in any of the LADOT documents – and that is, how all of this “gee whiz” top down planning is really going to impact the communities.

There are two fundamental issues not addressed in the over 200 pages of the LADOT Bike Lane Plan for Northeast LA: (1) a cost-benefit analysis that any normal business venture should have before spending large sums of time and money to make a significant change in the affected communities; and (2) a demographic and socioeconomic analysis of the impact the proposed changes would have on the residents of Northeast LA.

For example, in my own Glassell Park area, we have:

Such is my community (source: LA Times). Now in recent times, subsequent to that analysis, we have experienced considerable gentrification. This is anecdotally illustrated by the very high spike in the cost for single family homes in the area and a more diverse candidate grouping in our recent Neighborhood Council elections. But the statistical effects of this have not yet been recorded and analyzed (at least that I am aware of).

My question is – how do the demographics of my community and other affected communities compare with the bicycle commuter population who will be the primary beneficiaries of the proposed project? I don’t know the answer to this question, and as near as I can determine, neither does anyone else.

If everyone did this kind of basic population analysis, there would be the beginnings of a framework that could produce a result that would work for the bike-lane people (after all, bikes are cool, not to mention efficient) as well for as the diverse elements of the impacted communities.