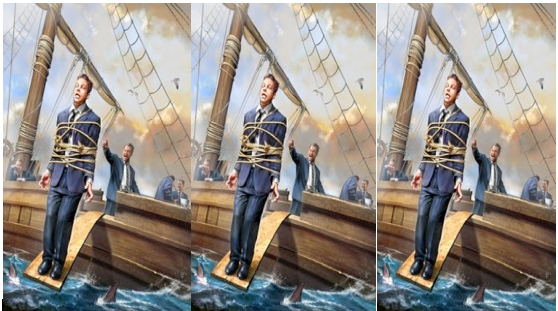 CAUGHT IN THE ACT-Show trials aren’t what they used to be. Ask California Coastal Commission Chairman Steve Kinsey, whose hearing this Wednesday in Morro Bay to decide the fate of the Commission’s Executive Director Charles Lester was supposed to be a brief “fake-weighing” of the evidence, followed by a hearty pushing of Dr. Lester into the sea. But instead, it’s ended up as a cause celebre among environmental heavy weights and some not-at-all-grandstanding politicians who think Dr. Lester should be kept on board, if not canonized.

The truth is that Dr. Lester should not be kept on board. In fact, the public should give Mr. Kinsey a hand when he leans over to push Dr. Lester off the ship of state. And then, once Dr. Lester is safely off the boat and Kinsey still has his back to us, we should push him overboard as well. And after that, Commissioner Wendy Mitchell should also get the heave-ho. That should do it for now.

Why all the shoving? Because all three of these individuals recently betrayed the public’s trust in a very specific way which, unlike Mr. Kinsey’s “charges” against Dr. Lester, can be clearly detailed and explained as follows:

Shortly after the Commission approved, on January 9, 2015, the construction of a 75 to 82 foot high automated dry stack boat storage facility with 11,600 square feet of water coverage (i.e. the structure will hang over that many square feet of water) at Basin H in Marina del Rey (permit No. 5- 14-0770), Commissioners Kinsey and Mitchell, along with Dr. Lester -- as well as the rest of the Commission -- were informed that several key representations presented to the Commission in connection with the project application were false.

The false information could hardly have been more material. In response to a question regarding the logistic feasibility of the proposed automated storage system, the Commission was assured by one of Dr. Lester’s deputies (with Dr. Lester himself observing) that, in effect, the technology was tried and true; specifically, that “other parts of the country use this technology” and so it’s “not unproven.” The falsity of this claim has never been disputed.

The truth is that there is only one operational fully automated dry stack boat storage facility in the world, and that facility, far from being an argument in favor of the Marina del Rey project, makes it clear why this current project needs to be further vetted by Commissioners. To date, the commissioners have not received full and clear information about what they and their constituents are getting themselves into.

First, the referenced operational facility (in Port Marina, Florida) doesn’t work for small boats. A wet slip (the most convenient and desirable way to store one’s boat) in the Marina del Rey market costs between $625 and $700 per month for a 34-foot boat, including hookups. Yet the rental fee for the same sized boat at the Port Marina automated facility is approximately double the cost.

Commissioner Mitchell has stated that her support for the Marina del Rey project was, to a significant extent, based on the belief that it would increase the public’s access to the marina by offering more places for small boats to be stored. But shouldn’t learning that small boats will not be accommodated by the new structure prompt Commissioner Mitchell to ask for some clarifications on all this?

The public and the Commissioners are owed full and accurate disclosure of what taxpayer dollars are being spent for an invaluable coastal location whose charter requires it to be safeguarded for public recreation. The most efficient way to do that would be to reconsider the item at the Coastal Commission's next meeting so that all the new information could be taken into account by the Commissioners. They would then be free to vote the same way they did the first time if they so chose. This is the kind of due diligence that the law, common sense, and good citizenship require. Chair Kinsey has several times been asked, yet still refuses, to reconsider the item.

And by, in effect, suppressing important new evidence regarding the boat storage development, Commissioners Kinsey and Mitchell, as well as Dr. Lester, have committed much the same transgression as do lawyers who neglect to inform their clients of a settlement offer. Those lawyers get debarred.

(Eric Preven is a CityWatch contributor and a Studio City based writer-producer and public advocate for better transparency in local government.  He was a candidate in the 2015 election for Los Angeles City Council, 2nd District. Joshua Preven is a teacher who lives in Los Angeles. Views expressed here are those of the authors and do not necessarily reflect the views of CityWatch. ) Edited for CityWatch by Linda Abrams.