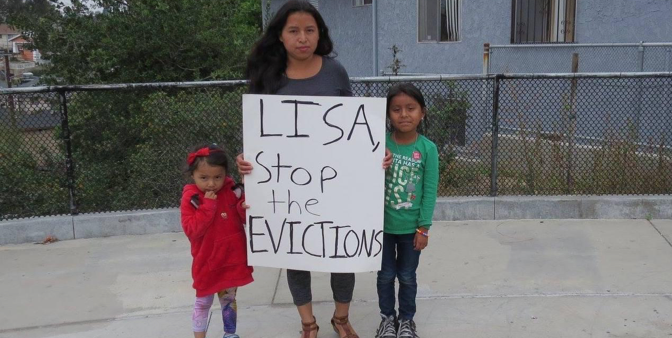 VOICES-Three separate juries have now confirmed what we in the VyBe chapter of the Los Angeles Tenants Union have long known: Lisa Ehrlich has allowed her properties to deteriorate to slum-like conditions.

These juries, ruling independently on just three out of the 87 pending eviction cases for the Burlington tenants, all concluded that the tenants were justified in their rent strike -- they’ve been withholding rent since March -- because their landlord breached the warranty of habitability, or failed to provide for adequate living conditions.

Our purpose here is not to retell this story, but to present Ehrlich’s history of property ownership and management in order to provide a broader context for the struggle of Burlington Unidos and other vulnerable tenants across Southern California.

The Ehrlich family owns/manages two properties that are of particular relevance. Many by now know about the Burlington apartments in gentrifying Westlake. The other is a large complex called the Park Apartments that the Ehrlichs manage in Palm Springs.

A Google Review of the Park Apartments from two years ago provides insight into how Lisa Ehrlich, and similar property owners, squeeze maximum profits from tenants while neglecting basic repairs and maintenance. “DD Team Closing,” claiming to be a former property manager at the complex, hired by Ehrlich, shows how slumlord behavior is intentional and systematic:

“Okay, so here is some insight from a property manager who once tried to manage this community. I ran this property, as the community manager, for almost two years and it was the worst two years of my career.This community had so much potential, however the ownership (Rexford Development/Creative Management) (a company owned by the Ehrlichs that declared bankruptcy in 2015) didn't give a damn about this place. I was told to raise rents and when I responded by saying the property needed a lot of work to justify raising rents I was slapped with a writeup.The corporate staff, not one of them, have had any actual field experience in property management. The company is owned by an attorney who inherited the company and millions of dollars her father left behind, so you would think that perhaps she would want to build on his legacy, right? NOPE! The lady is greedy, cheap and arrogant and all her properties suffer because of it.Here's something you might find interesting, if you're a current or past resident, ever wonder why it takes weeks to get your repairs done? Here's why, managers are only authorized to approve repairs that are no more than $100. If it's over $100 there is a ridiculous approval process...”

Now let’s turn back to the Burlington apartments. Situated in rapidly gentrifying Westlake, 200+ tenants in these three adjacent buildings are conducting the biggest rent strike in recent LA history, and -- as a result of their organizing -- are being threatened with mass eviction by Lisa Ehrlich. The apartments are technically owned by a corporate entity, “1979 Burlington Investment Trust,” started by Lisa’s step-father, Richard Ehrlich, but it has become clear to us and the Burlington Unidos Tenants Association that Lisa Ehrlich is the actual person pulling the strings -- she also formally serves as the Trust’s attorney.

Slum-like conditions at the Burlington apartments have been well documented, and, again, recently confirmed by three separate juries! The Ehrlichs have allowed these buildings to fall into disrepair, as residents must endure delayed trash collection that leads to rats and roaches, cracked walls and caved-in ceilings, hot water shut-offs, and elevators that frequently break down. The first three Burlington tenants to have their evictions tried in court were victorious, winning their case because the jury found the Ehrlichs breached the warranty of habitability-- that is, the conditions were so bad that the tenants were justified in withholding their rent.

As if more evidence was needed, there’s also a court case from 2004 that further documents how the Ehrlichs approach these issues. After they bought the Burlington apartments in 1994, they discovered the buildings had construction problems, and moved to sue the developers they had purchased the buildings from. The two parties eventually settled out of court in 1999, and then legally maneuvered to keep the evidence collected by the Ehrlichs to build their case -- toxic mold samples, photos of severe water leakage, etc. -- out of the hands of their tenants. The tenants got wind of this, sued for access to the evidence, and ultimately lost in a case that went all the way to the California Supreme Court.

The ruling was simply regarding whether or not the Ehrlichs acted legally in hiding their evidence, but the relevant facts are clear: the Ehrlichs knew about construction defects and made extra effort to hide it from the families living in the building.

Let’s revisit that first complex in Palm Springs.Lisa Ehrlich’s pattern of slum-lording becomes even clearer upon further investigation of her management of the Park Apartments. Here too, the complex is technically not owned by Lisa. It is owned Donald Crasnick, the same friend of Richard Ehrlich’s who is the “trustee” of the Burlington apartments. Additional online reviews bolster the claims made by the ex-property manager two years ago.

Lisa Colbert in a Google Review from three years ago wrote:

“*Warning* This Apartment Complex claims to be luxury apartments, but I can assure you they are not!  More like glorified projects! … This apartment complex ... is so poorly managed and extremely dated and grungy on the inside.  The water comes out white and the bathrooms were very dirty upon move in, as well as closet doors hanging off hinges and many other repairs needed that when you call the office to get things repaired

Here’s an anonymous review from ApartmentRatings.com, written in 2008:

“These people have no idea how to run a complex,they give out 3-day [eviction] notices like candy.This [manager] has no experience and is a novice and easily manipulated by the slum landlord owners. The roofs are very bad, rats and bugs everywherequite the opposite of the review written by the management/owners, don't believe it.”

Skimming through some of the other reviews on Google, Yelp, or ApartmentRatings.com demonstrates that these sort of claims -- that ownership and management defer maintenance and try to squeeze every last dime out of their tenants -- are consistent and exhibit clear modus operandi on the part of Lisa Ehrlich.

At the buildings in both Palm Springs and Westlake, Ehrlich maintains her innocence by managing from behind the cover of shell corporations, letting unacceptable living conditions thrive while charging top dollar. It is this history of landlord abuse that Burlington Unidos is fighting against, and it is the accompanying reality of systemic neglect that pushes us, the Vermont and Beverly (VyBe) Local of the Los Angeles Tenants Union, to fight alongside them.

We’re not supposed to say that Lisa Ehrlich is a slumlord, however, because most of these properties aren’t technicallyowned by Lisa.Lisa serves as the Trust’s attorney and directly benefits from it financially, so, while it might not be legally accurate to call her a slumlord, it is certainly correct for all intents and purposes -- the technicalities of corporate ownership be damned. Although she doesn’t literally own the properties, she is the one in control.

That being said, we write this piece not in order to shame Ehrlich, but to illustrate how slumlords operate. Neither the Burlington Apartments in LA nor the Park Apartments in Palm Springs are under rent control, so perhaps the main myth busted by this account is not about Ehrlich’s specific neglect but the claim that rent control causes property owners to delay maintenance.

Property owners allow slum-like conditions because it is profitable, plain and simple.They can maximize profit by neglecting repairs, knowing that poor tenants lack power to demand better maintenance or move elsewhere in this over-inflated housing market. This is compounded by weak regulations and enforcement on the part of city and county governments.

Taking Ehrlich’s actions into account, let’s dispense with the myth perpetuated by the landlord lobby that rent control leads to neglect -- that’s on capitalism.

(The Vermont and Beverly (VyBe) Local chapter of the Los Angeles Tenants Union helps tenants organize and fights for housing justice in the VyBe neighborhood. They meet on the 1st and 3rd Thursday of every month at 6:30 pm. For more information, check out: https://www.facebook.com/VybeLocal/) Prepped for CityWatch by Linda Abrams.