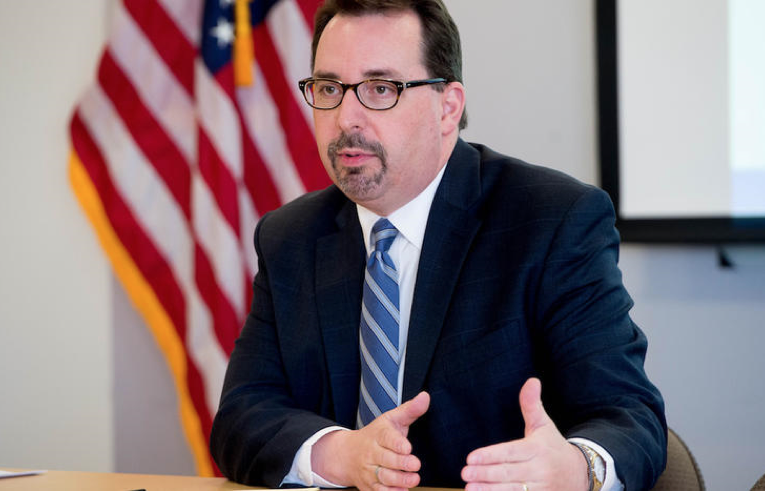 @THE GUSS REPORT-Los Angeles, we have a problem…and a pattern.

When Los Angeles County’s registered voters went to their polling stations to cast their ballots in last week’s California primary, up to 118,000 of them learned their names were not on the voter rolls maintained and provided by Dean C. Logan (photo above), the County’s Registrar-Recorder. Many, if not most, are believed to have been offered a substitute “provisional” ballot, though that number has not yet been confirmed by Logan’s staffers.

Logan blamed the problem on “a printing error” in primary day media interviews and the next day at a meeting with the five Los Angeles County Supervisors. As I pointed out last week, Logan needs to explain on exactly what day and time he first learned there was a problem; how he became aware of it; and why there appears to be no check and balance system to prevent such an incident or, if there is one, why it failed.

As the Supervisors prepare to hire an independent party to investigate what transpired, they should be instructed not to start with what happened here last week, but what happened in the state of Washington in 2004.

Monson is referring to the 2004 Washington state gubernatorial election pitting its Democrat Attorney General Christine Gregoire against Republican Dino Rossi. When the voting was done, Rossi was the winner by 261 votes. But the narrow margin of victory automatically triggered a recount which resulted in more “lost” votes surfacing for Gregoire, but Rossi still maintained a slim lead, triggering a second recount.

That second recount, according to Monson, resulted in additional “lost” votes surfacing for Gregoire, along with other chaos: 300 illegal votes; 400 unverifiable votes; 240 felons who voted illegally; 44 votes from deceased people; and 10 people who voted twice.

In the end, it was enough to put Gregoire in the winner’s circle and governor’s office.

“Then and now, I think it was a Democratic Party criminal conspiracy.” Monson continues, “the guy spearheading this in King County was Dean Logan, who was finding uncounted ballots all over. He was amazing at finding Gregoire ballots in-between counts. Dean Logan had to resign in disgrace from King County Elections. Where did he go? Los Angeles County.”

As for Los Angeles, Monson believes that Logan, a Democrat, might have deliberately made it more difficult last week for Angelenos to (presumably) vote for former LA Mayor Antonio Villaraigosa, thus criminally setting up primary winner Gavin Newsom to face off against an easier runoff opponent on Election Day in November, the considerably lesser known Republican John Cox, who beat out Villaraigosa for second place.

Logan has not yet identified the printer(s) who he claims caused the problem.

When he was hired by Los Angeles County in 2008, Judith B. Alter, a retired emeritus professor at UCLA and director of Protect California Ballots, told the LA Daily Newsthat Logan is “one of the least qualified people in the country… There were (24) other candidates, and that they would actually appoint him over all the other qualified candidates is just unbelievable.”

Alter and other election activists who lobbied against Logan’s hiring, claimed that in addition to the 2004 gubernatorial election chaos, Logan (whose 2017 salary was $280,260 with a total annual compensation package of $398,567) lacked a college degree.

But according to Logan’s online biography, he boasts of several degrees:

“Mr. Logan holds a degree in Organizational Leadership from Azusa Pacific University and an Executive Master of Public Administration from the Evans School of Public Affairs at the University of Washington.”

That puts Logan in Southern California for his undergrad degree, but in the state of Washington for his graduate degree, which is curious unless at least one degree was earned online because it appears inconsistent with his résumé history. Logan’s biography doesn’t provide dates of attendance or graduation dates at the schools.

Logan has also been ridiculed for 2008’s Super Tuesday “Double Bubble” fiasco, in which voters were not given clear instructions on filling in an extra ballot bubble for their primary vote to be counted properly. The blame in that case may have been more fairly given to Logan’s predecessor, but his failure to take proper corrective action is believed to have caused as many as 12,000 votes to go uncounted.

So, the question boils down to whether it was incompetence or sabotage. Monson’s sabotage theory isn’t so far-fetched because Logan’s bio lists extensive leadership positions that make incompetence a tough sell, including:

“Currently, Logan serves as the President for the California Association of Clerks and Election Officials (CACEO) and on the Pew Center on the States’ Voter Registration Modernization, Voter Information Project and Performance Index for Elections working groups. He is an active participant in the Future of California Elections collaborative; an initiative sponsored and funded by the James T. Irvine Foundation. Past work includes serving on the California Statewide Voter Registration System Advisory Committee and on the National Election Center’s Task Forces on Education & Training and Election Reform.”

If the County Supervisors’ not-yet-hired independent investigators are prohibited from looking closely at Logan’s earlier election mishaps, and the truthfulness of his biography, history may repeat itself in November or a subsequent election. What the County Supervisors should do is a top-to-bottom audit of every function at the Los Angeles County Registrar-Recorder, since Logan does not appear to have instituted safeguards for most of them in his decade working here, including voter registration integrity and poll worker screening.

And one last thing: why has LA’s mainstream media been essentially silent on Logan’s history of election controversies given this most recent one? The focus now needs to be on Logan, everything he says and, in voter registration parlance, everything he “declines to state.”