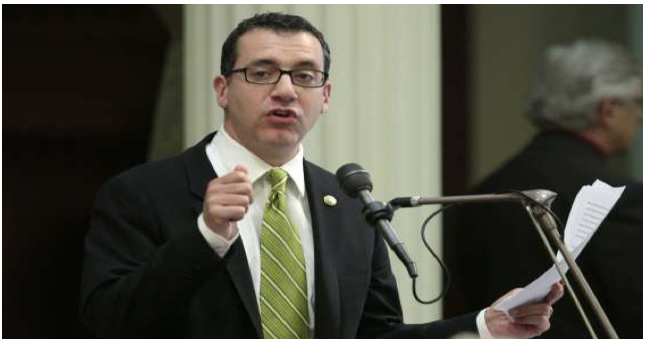 LAWS WORD--It is called home-sharing, Airbnb, or short-term rentals. It involves renting a room or guest unit at a primary residence for extra income, which can help cover the cost of a high mortgage payment.

It is a way to fend off foreclosure. It is a way to meet travelers from all over the world. It is a way to increase tourism to Los Angeles, providing visitors with a place to stay that may be more homey and affordable than a hotel, and which may cover “special needs.”

This brings me to Los Angeles city councilman Bob Blumenfield who I had occasion to meet at a recent Woodland Hills neighborhood council meeting. I call him a bobblehead because his thinking veered to the left, to the right, to the front, to the back -- any direction necessary to shoot down the idea of home-sharing. Blumenfield pretends to be even-handed on the issue (and perhaps he is even fooling himself), but his hostility is apparent. He began his presentation with, “There’s an Airbnb across the street from me.” The subtext was, “I don’t like it one bit.”

His views are important because the LA City Council will be voting on whether to restrict Airbnb rentals next week, and Blumenfield represents more than a vote. He is a member of the Planning and Land Use Management (PLUM) committee, and thus may have great influence over his colleagues. His opinions, and the arguments that seem to support them, need to be viewed for what they are: flawed. His “compromise proposal” needs to be seen for what it is: biased and anti-home sharing.

After mentioning his (pesky) Airbnb neighbor, Mr. Bobblehead went through a number of arguments as to why home-sharing should be restricted, beginning with the fact that there was a shooting at an Airbnb house in Encino. There have been shootings at schools. Does Blumenfield want to shut down Woodland Hills elementary? There have been shootings at hotels, apartment buildings, single-family residences, businesses, post offices, and even the Van Nuys courthouse. Does Mr. Bobblehead want to give them all the old heave-ho? It seems not.

Blumenfield then segued into his “fire argument,” stating that Airbnb homes don’t have ceiling sprinklers while hotel rooms do. He appeared to be saying that folks in the hundreds of thousands of single-family residences in LA -- owners, long-term tenants, and short-term guests alike -- are putting their lives at risk. Apart from the obvious flaw in his argument, it turns out that Mr. Bobblehead had bobbled into a falsehood. Older hotels with low occupancy are not required to install sprinklers, according to the LA fire department. A firefighter told me, “Many of these hotels don’t have sprinklers in the rooms, and they are not required to have them.”

Then Blumenfield spoke about his fondness for long-term rentals (30 days or more) in order to combat the affordable housing crisis but failed to mention that home-sharing has nothing whatsoever to do with the shortage of rentals. Most Airbnb hosts do not want a permanent guest -- sharing the kitchen, the yard, the television, and possibly the shower. They want the option of peace and quiet at times, and the option of additional income at other times. This is where they live and where their children live. It is a place they saved for, fixed up, and fussed over. It is their American dream. They want to be good neighbors. They want a harmonious community. They do not want to be saddled with long-term occupants who leave the toilet seat up or curse in front of their kids. Their family home is not an affordable housing solution.

This brings me to what I call the peril of long-term tenants -- another factor that Mr. Bobblehead conveniently ignored. If a homeowner rents out a guest unit, for example, on a long-term basis, he puts himself at risk because the lodger is magically transformed into a full-fledged tenant under California law after 29 days. This person cannot be evicted without a 60-day notice and if he files for bankruptcy, it could take six months to get him off the property. LA courts are notoriously pro-tenant and the poor homeowner and his family (who were already struggling in the first place) may even get saddled with thousands of dollars in relocation fees. Of course, financial hardship would only be part of the family’s nightmare; there would be the emotional trauma of dealing with a contentious, deadbeat lodger in the same space as the family. When a short-term guest does not pay or fails to follow the rules, he can be sent to a hotel on the spot.

Lastly, Mr. Bobblehead laid out his “compromise plan” at the meeting, which frankly did not resemble a compromise. It deviates from the current proposed plan, which allows people to host on their property for up to 180 nights per year -- a length that is not only arbitrary, but much too short, by the way. But Blumenfield wants to limit this to 120 nights per year unless a homeowner gets his neighbors’ approval and/or jumps through the arduous hoop of obtaining a conditional use permit -- a designation normally reserved for moneyed developers and corporations.

If the homeowner is awarded the permit, he could host up to 240 nights -- still too short a period by my calculation. Families who home-share are not Warren Buffets. They do not have the cash to pour into the conditional use permit process. They do not have land use lawyers or savvy spokespeople to navigate the maze of city departments. They are just ordinary people who are trying to survive, who want to keep their homes and be considerate Angelenos.

Neighbors do not want to go to battle with other neighbors -- the likely result of Blumenfield’s conditional use proposal. Everyone knows that one curmudgeon resident who will not give approval to anyone for anything. Does the city really want to pass a motion that will fuel feuds, cause resentment, and put the city in the counseling business? Isn’t there already enough divisiveness in the nation without fostering it in our neighborhoods?

Los Angeles should not put a cap on home-sharing. Ninety-nine percent of hosts are responsible and respectful of their neighbors, and there are already processes for dealing with the one percent of bad apples. They are called “noise ordinances, “nuisance ordinances,” and the like. A cap -- any cap -- will drive many property owners underground. They will circumvent the rules, and Los Angeles will lose tax dollars and control over the process. Those few who do not skirt the process will either be forced to sell (if they are in a financial bind) or will no longer rent out their extra room or guest unit. This will lead to reduced lodging choices for tourists. It will mean that Los Angeles is ignoring those with “special needs.” It will mean that the city council is siding with donors (the wealthy hotel lobby) instead of the struggling families of LA.

LA should not build a wall. It should toss aside all bobblehead ideas and be the welcoming city that it has always been.

(Dr. Charlotte Laws is a BBC television commentator, a former Los Angeles city commissioner, and the author of the new bestseller, Devil in the Basement. You can follow her on Twitter @CharlotteLaws)  Prepped for CityWatch by Linda Abrams.